Unthinkable: Why it makes sense to be a neo-Luddite

AI is displacing jobs – we need a ‘union 2.0’ to fight back, says William Myers 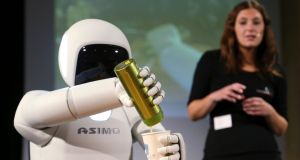 It’ll be after your job next: “Many of us may end up scrambling for low-paid, part-time service jobs that cannot be done by automation.” Photograph: Francois Lenoir/Reuters

To be called a Luddite is to be depicted as backward and small-minded. But are today’s Luddites – those resisting or critiquing the march of technology – taking the smart and progressive position?

Our relationships, workplaces and democratic institutions are being disrupted by new technology in a not-altogether-healthy fashion. While one may not be a slave to the machine, it certainly feels that way when one finds oneself answering emails or Facebooking at two in the morning.

A new exhibition at the Science Gallery at Trinity College Dublin, Humans Need Not Apply, explores how robots, automation and artificial intelligence are displacing people from jobs – and also how humans might respond to this existential threat.

The original Luddites were English workers who destroyed machinery, especially in cotton and woollen mills, which they believed was threatening their jobs about 200 years ago. Today, neo-Luddites can be found among industries at the coalface of automation –- in New York, for example, a 50-year ban is being sought by cabbies on driverless cars – but also among consumers and citizens who worry about the increased concentration of power in tech companies.

“In the United States workers unions have been on the decline for decades, while corporations have grown, wages have stagnated and wealth has become more concentrated.”

New forms of collective action are required, he argues, such as a “2.0 version of the union” which uses technology to fight the latest modes of exploitation. Myers cites the example of an app that was created recently to help the likes of Uber drivers and Airbnb hosts to challenge their employment conditions.

No one should consider themselves safe. He warns: “Many of us may end up scrambling for lots of low-paid, part-time service jobs that cannot be done by automation, translating to more working hours and less satisfaction.”

There have been a lot of predictions about the likely impact of technology on the workplace. What human occupations are most likely to go extinct?

“If you’re a taxi driver, loan officer, legal clerk, retail floor worker or radiologist, for example, your job is likely in peril since its processes, though complex, are relatively formulaic and repetitive. These jobs won’t all disappear completely or at once, but we’ll need many fewer of them to do the same amount of work.

“On the other hand, if your work is creative, variable, and relies on social connectivity or what some call ‘emotional labour’, like that done by a therapist, executive assistant, comedian or clergy, your job is pretty safe for now.”

How will technology impact on leisure time?

“Leisure activity, especially entertainment, will become more customised to your tastes. Love Star Wars? How about a new, completely CGI Star Wars movie every day of the week? It won’t be long before such a thing is possible, and it will be adapted to your tastes for what types of characters, storylines, and action you prefer.

“The adaptive systems behind familiar systems like the Netflix and Amazon suggestion engines are only the beginning. New content generation that is endless, engaging, customised and inexpensive is on its way. Would something like this put actors out of work? I don’t think so: I’d wager that more people would start going to the theatre.

“Regarding idle time, I’m not sure we’re about to get more of it. John Maynard Keynes, the world renowned economist, predicted in 1930 that his grandchildren would work no more than 15 hours a week. This never materialized even as overall wealth kept growing. Looking to the future, fewer work hours may be even less likely, as wealth becomes ever more concentrated.”

How is technological displacement impacting on worker identity and self-esteem?

“It is damaging. The ‘problem’ that most artificial intelligence is being geared to solve when it comes to automation is the high cost of employees. This focus is blind to the human costs or the community impacts of putting people out of work, or of pushing them into insecure, freelance, or part-time arrangements. These are very real costs to which people must push their governments to respond.

“In the past, as agricultural work was replaced by factory and service jobs in the Industrial Revolution, governments built schools and made primary education mandatory while beginning to subsidise higher education and tax corporations. Workers simultaneously built a labour movement and formed unions. But these models of support and power-sharing have proven insufficient in the 21st century.

“New, more nimble systems are needed to address the scale and speed of current changes propelled by machine learning. Lifelong education initiatives can be of help, for example, in which people are funded to retool or relocate with new skills every few years, instead of relying on one or two long university experiences. Another reform could involve realigning incentives, so that universities receive no tuition [FEES]unless graduates earn well in the future, a percentage of which is paid to the school.

“Broad protections for freelance workers are also overdue, in which companies might finally be obliged to contribute to the many costs, such as pensions, healthcare, and sick time, which those workers now bear alone.

“The emergent and so-called ‘gig’ economy demands 2.0 versions of unions, regulations, corporate taxes, and education. Whether most people will prosper in this new machine age will largely depend on how effectively we pursue their development”

What about a neo-Luddite movement? Perhaps we should try to slow, halt or reverse technological advances?

“There may be a kind of anti-technological movement already underway. This is one interpretation of the craft renaissance that’s resurrected practices like letterpress printing, or created new ones, like the artisanal coffee that takes ages to brew.

“Some years ago I began making my own bread and beer, learning fermentation to create something that was more satisfying and varied that what I could find in a shop: no two batches or loaves are ever the same.

“These things may have mostly to do with chasing authenticity or a certain lifestyle, but I think there’s some connection between the growth of these practices and the accelerating pace of automation. The Dream of the 1890s song and video - from the television show Portlandia - captures some of these ideas well, if exaggerated.

“When you tap virtual keyboards and stare at screens all day, the sensation-rich moments offered by kneading dough or touching the grooves on a vinyl record are a kind of therapy.

“That said, it should be noted that there are currently not enough barista or artisanal bakery jobs for everyone, and they don’t pay that well anyway. But the more we turn away from commoditised goods and services in search of the experiential, we support creating employment that resist automation.”

“Humans need not apply” runs at the Science Gallery, Trinity College Dublin between February 10th and May 14th. dublin.sciencegallery.com

Question: Donald Trump would never have got elected if it wasn’t for Twitter, am I right?

Samuel Beckett replies: “There’s man all over for you, blaming on his boots the faults of his feet.”

Mad Men made perfect sense during the swirling disorder

Mad Men made perfect sense during the swirling disorder
3

Patrick Kielty: ‘We weren’t sure how many people would turn up – 400 queued around the corner’
10

Ralph Steadman: With gonzo, you don’t cover the story; you become the story
Real news has value SUBSCRIBE