Unthinkable: Why Charles Darwin is a threat to religion 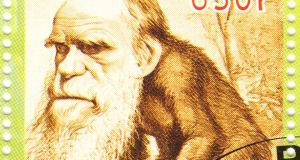 Stamp of genius: a Rwandan postage stamp in honour of the scientist

Darwin Day, which falls on February 12th, is the unofficial feast day of atheism. No human being commands such awe and respect from the so-called New Atheists than the bearded explorer.

In gushing terms, the atheist philosopher Daniel Dennett likens Darwinism to “universal acid: it eats through just about every traditional concept, and leaves in its wake a revolutionised worldview”.

Just why this is so is highlighted by imagining a world without Charles Robert Darwin, which is exactly what Peter J Bowler did in his book Darwin Deleted. In a counterfactual analysis, the professor emeritus of the history of science at Queen’s University Belfast argues that Christians would have been more accepting of evolution had Darwin not explained it through natural selection.

This isn’t to say Darwin had a duty to rein in his genius but rather it suggests there’s nothing inevitable about the specific nature of today’s conflict between science and religion. Or, as Bowler hypothesises, providing today’s idea: “In a world without Darwin, both evolutionism and the selection theory would have emerged in a less confrontational manner that would make them much easier for religious thinkers and moralists to accept.”

Why do you say relations between science and religion would be less confrontational without Darwin?

“Liberal religious thinkers in the middle decades of the 19th century were becoming much more comfortable with the notion of God governing the world through law rather than miracle and more comfortable with the idea that this might include, given the fossil record they were already beginning to know about, some form of evolution, provided it was a kind of purposeful, progressive evolution, not just something totally random and chaotic.

“But then natural selection comes along and it makes the whole debate much edgier. It’s not the kind of process you’d expect a wise and benevolent god to use to create human beings.

“My argument is that had it not been introduced then, had there been other developments – Herbert Spencer and others were talking about rather more purposeful, progressionist views of evolution – and had natural selection not been discovered until it reared its head again with genetics in the early 20th century, then there wouldn’t have been the same outcry.

“Darwin jumped the gun by throwing out the most radical idea at a very early stage when nobody was ready for it.”

How would atheism look today without Darwin?

“Certainly, things would have been different. The radical, anti-religious people have always found natural selection a very useful argument. But there were plenty of other things they could draw on in the 19th century. Some physicists were pushing the idea that essentially the universe was just a machine that doesn’t show purpose.

“I’m not saying evolution wouldn’t be there as an issue but it wouldn’t be the kind of flagship bit of science they all focus their attention on. It would be perhaps one of a larger group of scientific issues that the atheists and intelligent design people would be arguing about.

“The reason you do counterfactual history is to try to prove whether connections that we think are absolutely necessary and essential really are so, or could they be the product of contingency or historical circumstances.

“We assume atheists and religious people have to fight over evolution as one of the central territories. Maybe it’s only central because of that set of events.”

Do scientists need to be careful with their language so that, for example, ‘survival of the fittest’ isn’t misinterpreted as endorsing eugenics?

“Terminology does matter; ‘survival of the fittest’ is not Darwin’s term, it’s Herbert Spencer’s term, and of course Darwin did try and soften the blow, particularly in the concluding paragraphs of On the Origin of Species to make clear that although there was not a direct arrow of evolution pointing to human beings, on the whole things did improve, get more complex and advanced.

“So Darwin does try to put a gloss on it that he hoped would make it less of a frightening thing for his contemporaries. It didn’t work very well because the conservatives were very sensitive to this and they could read between the lines.

“If you have got a potentially sensitive theory, I certainly don’t think scientists can be excused for refusing to put it out. But yes, you should think very carefully about how you put it out and who might have difficulty with it, and try to present it in a way that doesn’t deliberately get up the noses of people.”

It’s very human for people to resist facts that they find uncomfortable. Did Darwin fully believe in Darwinism?

“It is fairly clear Darwin was what we would call an agnostic. He always insisted he was not an atheist. On the whole, in the later part of his life, he was certainly not a Christian.

“He does realise himself that the theory is not really compatible with anything that most religious people regard as religion.

“The type of religion people are interested in is one where God ‘cares about us’, but the drift of science has been to make it much more difficult to believe that the world has been created by something that takes a personal interest.”