Unthinkable: Who’s running the show, you or your brain? 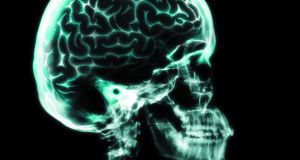 if we think of the mind not as an object but as a process, or an emergent state of the brain – in the way that life is an emergent property of a cell or a living organism – then you have much less of a problem in thinking how the mind, or mental states, emerge from brain states.

The nature of the mind has vexed philosophers and scientists for centuries. Though seemingly of esoteric interest, the issue has profound implications for all of us.

Where does your sense of “self” come from? Are you, as consciously understood, merely the by-product of the 3lb of neurons, other cells and blood vessels inside your skull? Have you a soul that outlives your body? Is there, in fact, a “ghost in the machine”, to use the phrase of British philosopher Gilbert Ryle (when dismissing René Descartes’s mind-body dualism)?

To that last question, Dr Kevin Mitchell firmly answers in the negative. This senior lecturer in genetics at TCD (and blogger at wiringthebrain.com) provides today’s idea:

The mind arises solely from the activity of the brain.

What sort of thing is the mind?
Kevin Mitchell: “Part of the problem with the debate that has gone on for centuries is when we say “the mind” it sounds like an object, or a thing that presumably should be made of some stuff – immaterial stuff, even though that phrase is an oxymoron, really – and then you have this huge problem of how that stuff interacts with the stuff the brain is made up of.

“But if you change that, and think the mind is not an object but a process, or a property, or an emergent state of the brain – in the way that life is an emergent property of a cell or a living organism – then you have much less of a problem in thinking how the mind, or mental states, emerge from brain states.”

How has neuroscience added to the stock of knowledge around the mind?
“Neuroscience has over the last century or so really demonstrated this correspondence between brain states and mental states, and the evidence from that comes from lots of different areas. One of them is you can actually look at the activity of the brain and see the parts of the brain that are active when mental states are happening.

“Even more powerful is that you can disrupt mental states by changing the activity of the brain. You can do that with drugs, for example. Or you can stick electrodes in somebody’s brain: you can give a little zap and somebody will have a mental state, and so on.

“All of that together really constitutes a pretty strong explanatory framework. We can manipulate mental states in a predictable kind of way and we don’t actually need anything else in our overall theory of how they emerge except for brain states.”

But can neuroscience explain all mental states? What about our broader sense of self-awareness, or consciousness?
“The main thing that is left to explain is exactly that: consciousness or the subjective experience. So I can say that if I zapped your visual cortex I can make you see a patch of purple out in the world in a certain position, and that might be an accurate statement but what it doesn’t capture is why it feels like something for you to have that experience. There is no real strong reason why it should feel like anything.

“So this question of subjective experiences, and where they come from and whether there is some way we can describe them that relates to the physical activity of the brain, is really an open one. We don’t yet have a good answer to that.

“And that brings up this philosophical question: Is it the case that we don’t have a good answer to that because we have not yet discovered it scientifically? Or because it is not discoverable scientifically and requires some other explanation – this reference back to an idea of an immaterial kind of a spirit or soul or something like that?

“I’m inclined to think we just haven’t figured out yet. That’s based on observation of the history of science and the fact that we’ve learnt so many things. Life was mysterious for a long time and people thought there was some kind of vital essence in living things, and now we can see it’s not necessary to invoke that. We already have a really good explanation: life just emerges from all the components of a system and the relations between them.”

This idea meets with religious as well as some philosophical objections. One might counter that if you really want to explain consciousness the best person to turn to is a poet rather than a neuroscientist.
“I think it depends on what you mean by “explain”. If you want to know about how consciousness emerges from states of the brain then you should talk to a neuroscientist and if you want to know something about the nature of the subjective experience and how one person can communicate that private experience to someone else then, yes, a poet is your best person for that job, or a novelist, or whatever.”

If you elevate the brain above the mind does it lead to some uncomfortable conclusions, and might this explain some of the resistance to the idea?
“Yeah, it’s uncomfortable for me as a neuroscientist as it is for anybody else probably: the idea that we are effectively androids, though made out of carbon; that my mind emerges from the workings of my brain and nothing else.

“There are a few implications: one is if my brain gets damaged or ceases to function when I die then that’s it for my mind, it just won’t exist anymore. So that’s obviously uncomfortable for lots of people. The other is that obviously it’s a fragile kind of a thing. If you know someone with Alzheimer’s, for example, you can see someone’s mind disintegrating due to physical deterioration of the brain.

“But while it’s uncomfortable that fact doesn’t bear on the truth of the matter.”

Question: How do I know if I’m being true to myself?