Unthinkable: Is religion just a matter of taste?

Ideologies have a power to build communities; that’s why they endure, says philosopher Alexandra Grieser 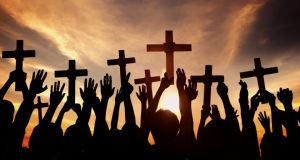 ‘That religion is back on the political stage has much to do with its power to build communities and provide blueprints for action.’ Photograph: Thinkstock

Philosophers such as David Hume and William James argued long ago that reason and emotion are intertwined. Discoveries in neuroscience have confirmed their hunch. Yet today’s debates on ideology and religion seem reluctant to acknowledge the evidence.

People are labelled either left or right, either religious or scientific, as though they wear ready-made uniforms of belief. But as Trinity College Dublin lecturer Dr Alexandra Grieser points out, ideology is never purely a matter of principles; it is also bound up with sensations and tastes. Grieser, who is assistant professor for the theory of religion, argues that we can deepen our understanding of religious belief through aesthetics: the study of sensory values.

She provides today’s idea: “Aesthetic forms are never only expressions of ideologies; they create the realities we live in.”

How is an ideology more than just the principles underlying it?

“Political ideologies have always linked up with forms of art, symbols and architecture; they ‘tuned’ the body, as in parades and by uniforms, and they prescribed how to sense, feel and behave between kitchen and bed, without much of a difference between religious and, say, communist ideals in this respect.

“Religion, however, has the advantage of being rooted in long historical traditions. It harks back to repertoires so well-established that even its critics have to deal with them.

“Today, it seems that the time of the great political ideologies is over. It is more the mediated world full of promises and advertisements that led sociologists of the 1990s to observe a ‘McDonaldisation’ of our perception; we’re thinking we have a free choice, but we’re choosing uniformity.

“Ironically, McDonald’s recent TV spot advertises that ‘taste is a powerful thing’ by showing that cheese and honey are disgusting, and only the burger gives the security of knowing what you get.

Does the experiential nature of religion explain why it is so resilient to attacks from science?

“That we expect religion to ‘go away’ has much to do with the western Enlightenment idea that science would replace religion and make it superfluous or wrong. But religions change over time, and they are not confined to explaining natural phenomena.

“For some time it looked like sociologist Robert Bellah was right in saying that religions have become a matter of ‘habits of the heart’. If you want to know about astronomy, you don’t need to ask the Vatican any more, but if you are looking for communal rites, for a meaningful form of coping with crises and death, you wouldn’t go to the university either.

“Moreover, science does not deliver the values that determine how to consequentially act. Science and technology even brought along problems we never had before, and religions gained a critical function when it comes to questions such as the redefinition of ‘brain death’, or what we should be doing on human embryos.

“That religion is also back on the political stage has much to do with its power to build communities and provide blueprints for action.”

Can you understand religion, then, unless you have also experienced it?

“Maybe it is even harder to understand religion when you think that the experience of others should resemble your own. If I want to understand the interplay between religion and violence, for instance, it might be more important to look at what motivates people than to share their experience.

“But if one wants to study the many aspects of religion, it certainly helps to assume that religious people are ordinary human beings, and not just ‘those weird people believing strange things’. It is on the basis of their humanity that we can understand even extreme actions or attitudes.”

How has neuroscience become a battle ground for ideologies?

“It might sound a bit like a political thriller to say that the military has a huge interest in brain research. However, Edward Snowden has shown that we are living in such a political thriller every day, and movies such as The Matrix have already responded to the idea that knowing about the brain also means knowing how to control it.

“We have great research that shows how the brain has been imagined as the steering centre of our personhood, as the commando bridge of our body, and as the computer that can be reprogrammed for optimal functioning. But recent findings show how strongly entangled our ‘embodied mind’ is, and that we create the brains we have, not least through how we treat and use our bodies.

“Instead of creating a neuro-religion and believing that fixing the brain will fix all odds of human life, it is important to ask the simple question that philosopher Catherine Malabou wants societies to discuss: what should we do with our brain?”

Dr Alexandra Grieser and cognitive scientist Dr Fred Cummins are giving a joint talk on March 4th, 6-7pm, called The Ground from Which We Speak, as part of the Dublin City Council Welcome Disturbances exhibition at the Lab Gallery, in partnership with UCD Art in Science. www.thelab.ie