A Trinity scholar warns against generalising about a population of 1.6 billion 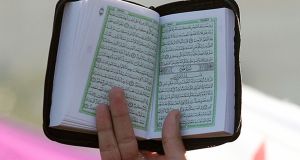 A charge commonly laid against Islam is that it is incompatible with western values. Certainly, passages of the Koran can be hard to reconcile with tolerance or respect for minorities.

But the same can be said for passages of the Bible. So does Islam pose no less a threat to the upholding of human rights than Christianity?

To properly answer such a question, Dr Roja Fazaeli, lecturer of Islamic civilisations at the department of Near and Middle Eastern studies, Trinity College Dublin, says “Islam should not be regarded homogeneously . . . Too often questions around human rights and Islam are reduced to dichotomies of compatibility and noncompatibility without taking into account context and history.”

She warns against generalising about a population of 1.6 billion, and provides today’s idea:

“No one person can speak for Islam nor can we say that there is a distinctly Islamic approach to any theory.”

What distinctive approach do Muslims take to human-rights theory

“Pointing the finger of blame to ‘Islam’ or any other religion as the source of human-rights violations is naive and simplistic.

“Scholars take different approaches to the debates around Islam and human rights, but broadly speaking we can follow [UK-based legal academic] Niaz Shah’s approach and separate these approaches into three strands:

“The first are those who advocate strict adherence to the Universal Declaration of Human Rights (UDHR) and to international human-rights standards in general.

“The second are those who argue that Islamic human rights norms are compatible with international standards in many respects and that where they conflict, those areas could be reformulated and reconciled with international standards. Those allied with this approach believe that Islamic law is reformable through a reinterpretation of the divine text of the Koran. This group of reformers are not trying to reconcile Islamic and international human-rights standards, rather they argue that the Koran ‘is a living text and can be reinterpreted to meet contemporary needs of given Muslim societies’ [Shah].

“The third approach is noncompatibility, which many Islamic governments and conservative Muslim scholars employ. This argues that the international human-rights system is a hegemonic tool of the West and a new form of western imperialism. In such a reading the Islamic legal system is regarded as being superior.”

Is the UDHR compatible with Islamic teachings on apostasy

– the abandonment of faith – and the status of women? “Most Muslim-majority countries have signed and ratified the majority of UN core treaties.

“From a treaty-based perspective the overall picture is positive. However, the relationship is more complex. While the UDHR is not a treaty, it both supports and broadcasts a set of normative aspirations that undergird the treaty-based system.

“With regard to the UDHR, one international legal scholar [US-based Abdullahi An-Na’im] notes how ‘the initial conception and formulation of the Universal Declaration of Human Rights, as the essential normative and institutional framework of all subsequent instruments and developments, was “negotiated” between delegates of primarily western powers, with minimal representation of African and Asian countries’, in short many Muslim majority countries.

In this light it is important to understand that for some Muslims the idea of the UDHR as ‘a yardstick of human integrity’ is fatuous from the outset.

“All the same, many Muslim-majority states have found it politically expedient and necessary to engage the legal mechanisms of the contemporary international human-rights system and to build a paper trail that models the ideal of compatibility.

“These same states are often rightly criticised when they ratify a convention, such as the Convention on the Elimination of All Forms of Discrimination Against Women, with reservations and do not follow through with subsequent national legal reforms.

“On the other hand some critics point to the fact that even an insincere engagement with the international human-rights community can help domestic reformers in many of these states gain traction in the long-term push to advance women’s rights and secure religious freedoms.”

How can Islam be reconciled with the demand in liberal democracies for the separation of church and state?

“If we take secularism to be understood as an aspect of the relationship between religion and the state, then an Islamic rationale for a secular state is entirely possible. This is the view taken by An-Na’im.

“In his view a well-constructed secular state should be the best protector of religious freedoms, and the least likely to violate freedom of religion or belief.

“Such a state, according to An-Naim, would also offer the security and stability to allow for Muslims to choose liberal interpretations of Islamic sources. This would create space for the reform of traditions so that communities would not bound to a so-called ‘historical sharia’. Rather they would be free to pursue new paths of self-determination and self-definition coherent with modern principles of constitutionalism, human rights and citizenship.”

Dr Roja Fazaeli delivered the opening lecture at Trinity College Dublin’s human rights and religions course 2016, which runs over eight weeks and is designed for educators, civil servants, gardaí and members of the public who wish to better understand minority faiths in Ireland. Cost is €150, with concessions for NGO staff, students, pensioners and the unemployed. Email holderr@tcd.ie for further details