Unthinkable: Can you cheat in sport and still be said to have won?

Making a case for the ‘moral victory’ in sport 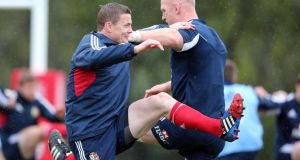 In a sport such as rugby, different positions in a team showcase distinct excellences: the virtues of Brian O’Driscoll are not identical to those of Paul O’Connell. Photograph: Inpho

Thinking and sport have an uneasy relationship. Normal priorities and even moral codes often go out the window when athletes take to the playing field, while fanaticism is celebrated on the sideline.

What coaches call “overthinking” is seen as a particular hindrance to sporting excellence. So if Johnny Sexton is lining up a place kick in tomorrow’s rugby international, he probably won’t be asking himself, “What exactly am I doing here?” or “What’s the meaning of all this?”

But why should sports people and sports fans be exempt from pondering such fundamental questions? John William Devine, visiting lecturer in philosophy at King’s College London (and a decent tennis player), is in the umpire’s chair, putting forward today’s idea: It’s not possible to win in sport unethically.


What’s the purpose of sport?
John William Devine: “At first glance, it may appear that sport has no single purpose. After all, what could possibly unify figure-skating with Olympic wrestling? Furthermore, different levels of competition within a single sport seem to exhibit different purposes.

“Recreational sport provides a means of promoting health, having fun and perhaps even building character. However, elite sport is often bad for athletes’ long-term health, it is commonly also their profession, and it is also, albeit uncomfortably, part of the entertainment industry. The intrinsic purpose that runs through every level of sport is that the rules are designed to require competitors to display certain kinds of ‘excellence’ – qualities of body, mind and spirit – in order to win.

“A sport like rugby, which involves kicking, passing, tackling and so on, showcases a complex web of excellences, and different positions in a team showcase distinct excellences: the virtues of Brian O’Driscoll are not identical to those of Paul O’Connell. This purpose of requiring players to display specific excellences provides the basis for argument about the value of a sport and the rules that govern it.”


Does a different moral compass apply in sport?
“The rules and norms that govern sport are derived from a different source to ordinary morality. If we don’t like the fact that it’s wrong to, say, kill innocent people, that doesn’t mean we can change morality to redefine killing innocents as morally right. However, if we don’t like the offside rule in football, we can simply decide to drop it from the rule book.

“Such changes can be costly, however. That the rules of sport are convention does not mean they are arbitrary. A change to the rules of a sport could undermine the purpose and distinctive value of that sport. Imagine if we decided to eliminate the rule against the forward pass in rugby or against outfield players handling the ball in soccer. These changes would radically alter the excellences that rugby and soccer challenge their competitors to display.”


Is it better to lose ethically or win unethically?
“If we understand winning unethically to mean employing means other than those permitted within the rules to achieve the desired end [scoring goals, winning points, crossing the line], then I’m not sure it is even possible to win unethically.

“Cheaters may enjoy the fruits of winning – trophies, money, adulation – but the appearance of winning is not the same as actually winning. The goal of any sport is inseparable from the means of achieving that goal. The marathon is not simply about crossing the finishing line before your opponents. One must run within the confines of the course once the starting gun has sounded.

“Using a car or taking a shortcut would not allow an athlete to win a marathon, even if it would allow her to reach the finish before her opponents. The end goal of sport is defined in terms of the means. If an athlete does not follow the prescribed means, she can’t achieve the desired goal. The slogan for this position might be: ‘Cheaters never win, because [by definition] they can’t.’”


Do fans bear some responsibility for cheating in sport by advocating an ‘ends justifies the means’ philosophy?
“Fans help to shape the incentives and moral standards to which athletes are held accountable. If fans have a weak commitment to fair play – perhaps failing to appreciate what it means for a victory to be meaningful – this can make it more difficult for their players to see and do the right thing. To say that fans can help to create conditions conducive to cheating is not to excuse the athlete who cheats. It is to extend the scope of responsibility to fans, not to extinguish the athlete’s responsibility.”


What moral difference is there between doping and taking non-prohibited bulking products or aids such as creatine?

“There is a spectrum, from eating large amounts of tuna to using anabolic steroids. Can we identify a non-arbitrary point to distinguish between permissible and impermissible substances?

“Difficult calls have to be at the margins, but we should make these decisions considering the health of athletes and whether the impact of any enhancement – pharmacological or otherwise – would undermine the display of the excellences around which the sport is organised. This latter element depends on each sport’s understanding of its purpose, so it points to a sport-by-sport approach to the banned list rather than the less tailored, almost one-size-fits-all approach that we have now.”

Are sports that involve a higher degree of physical violence or injury, such as boxing or rugby, implicitly less moral than, say, tiddly-winks?

“Sports involving violent collisions might appear morally objectionable on several fronts. The risk to health to which athletes expose themselves in these sports is concerning.

“This raises the question of whether athletes knowing the risks and having freely consented to participate dissolves any concerns we might have about the morality of people engaging in such dangerous activities.

“Is consent really enough to extinguish any moral concerns we may have? If it is, given both the often limited understanding that athletes have of the risks they are taking, and pressures from coaches, agents and sponsors, do athletes really consent in a meaningful way?”

Question: “Penalty! Referee, are you blind?”


Bertrand Russell replies: “We all have a tendency to think that the world must conform to our prejudices.”