Unthinkable: Are freedom and equality inevitably in conflict?

In the cry for freedom, what exactly are people looking for? 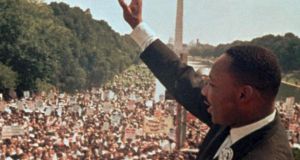 Was Martin Luther King right that white people in a position of supremacy can only be free if black people are free? Photograph: AP Photo/File

Freedom is almost certainly the primary political value of our time. It is invoked as the justification for innumerable causes, its two syllables echoing through history and popular culture (and I’m not just thinking of Mel Gibson’s Braveheart ). But who defines freedom? And are there limits to how free we should be?

These questions have taken on an ideological slant in recent years with wars being fought in the name of “spreading freedom”, and the Tea Party movement in the US campaigning against centralised government.


What does it mean to be free?
Maeve Cooke: “To be free is to have some power to determine the shape of the life you want to lead. Having that power will involve a certain measure of non-interference by other people but it will also involve having the resources and the capacities to develop your personality in certain ways.

“The philosopher Isaiah Berlin distinguishes between two broad ways of thinking about freedom historically, one negative and the other positive. The negative concept of liberty is freedom from interference by others. The positive conception is more slippery. Berlin associates it with self-determination or self-realisation – with having the capacity to shape your life in a certain way.

“Within the western, modern, broadly liberal tradition of thinking about freedom, most philosophers favour a more negative conception. They are suspicious of the more positively oriented conceptions because they think – like Berlin – that these ideas lead quite easily to forms of authoritarianism, where one individual or a group of individuals feels in a position to tell other people what they should do to shape their lives in the right way.

“The more positive conception ties freedom with ethics and morality in the way the negative doesn’t, and that’s what makes modern philosophers a little bit suspicious of it. But I think that can’t be avoided. I think freedom does have an ethical or moral dimension and it’s important to retain sight of it.”


The Irish philosopher Philip Pettit has advanced the notion of

freedom as non-domination. What does he mean by that?
“What Pettit adds to the Berlin conception of negative freedom is the idea that freedom is not just a matter of
non-interference; I have to be free from the arbitrary will of other people. And the very good example Pettit gives is that of a slave who has a very benevolent master – so much so, that

his life is idyllic, let’s imagine; Pettit would say that slave is not free no matter how well he is treated, no matter how subjectively good he feels about his life.

“It’s being subject to the arbitrary will of other people that detracts from freedom in Pettit’s account; I think that is absolutely right.”

“One of the thoughts that has been going increasingly through my mind, and was brought vividly to my mind during the summer on the occasion of the 50th anniversary of Martin Luther King’s ‘I have a dream’ speech was when King says at one point that ‘our white brothers [present at the speech] . . . have come to realise that their freedom is inextricably bound to our freedom’.

“Really think about that: why can white people in a position of supremacy only be free if black people are free? I think King is right, but to really make sense of that intuition requires quite a bit of philosophical work, and I think in the last 150 years or so there hasn’t been that much work in the western tradition of political philosophy of thinking about that question: why my freedom requires you to be free as well.”


Freedom doesn’t necessarily make you happy, and it brings its own problems, like the curse of excessive choice. As a value, then, is freedom over-rated?
“I don’t think so. I think some people interpret freedom in ways that are suspect, and perhaps the ways in which they live their lives are ones I would want to emulate or advocate to other people. But if you think of the basic freedoms most of us enjoy as citizens and take for granted – if one stops to think how much struggle and effort historically went into securing these freedoms for the general mass of people then it would be very hard to over-rate freedom.”


But what about freedom’s ranking against other values? Are there ideals more important than it?
“It is clear that any idea, concept or value can and often does become ideological, and there is no question that freedom is used in ideological ways in various parts of the world today, particularly in certain sectors in the US. But I would say, speaking as a philosopher, it’s a misapprehension as to what freedom is, or it’s a
one-sided view of what freedom is.

“Some people would say certain libertarian views just exaggerate the importance of freedom and neglect other values, such as equality or social cohesion. That’s one way of looking at it. I would prefer to say that they fail to see how freedom involves certain forms of social justice and equality, and that one can’t be free unless other people are free, and unless certain social structures are in place, and certain institutions are promoted.

“Coming at it from the other way, I would say that freedom, equality, and other core values are linked. It seems hard to think why anyone would want equality unless they would want some form of individual freedom as well.”

Question: F*** you! So what if I’m ignorant and insulting?


Sø ren Kierkegaard replies: People demand freedom of speech as a compensation for the freedom of thought which they seldom use.