Women with convictions: ‘This is a female show and it’s badass’

Netflix’s ‘Orange Is the New Black’, about a middle-class citizen who ends up in a tough prison, hands strong roles to its overwhelmingly female ensemble cast 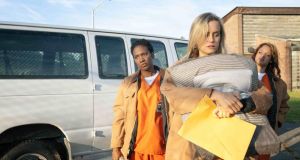 Taylor Schilling, centre, who plays the lead role of Piper Chapman in Orange Is the New Black: “It’s so unusual to get sent a script where the woman is taking the hero’s journey” 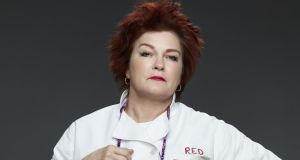 Kate Mulgrew: “I raised two boys, broke the glass ceiling in TV and did the best I could. It was diabolically difficult, and I wouldn’t want to repeat it, but when it was over I said to myself: ‘you really did something’ ”

In a blacked-out van, with rain bouncing off the roof, we’re crossing the Queensboro Bridge from Manhattan to Queens. The traffic, the gloom and the darkened windows ratchet up the claustrophobia, which is apt – as we’re heading for prison.

Okay, not actual prison, but the set of Netflix’s new incarceration drama, Orange Is the New Black. Before long, we’re walking around the same sound stage – Kaufman Astoria – where the Marx Brothers films and Sesame Street were shot, and into some filthy bathroom stalls, a fake visitors’ room and the prison canteen. Everything feels grimly realistic, until someone yells “aaaand cut” and a warning buzzer for a scene change reminds us that this is TV.

Inspired by Piper Kerman’s memoir, Orange Is the New Black tells the story of Piper Chapman, a middle-class citizen who ends up in a tough women’s prison. In 1993, Kerman had an affair with a woman called Nora Jansen, which led to involvement with an African drug lord and money-laundering. Ten years later, Jansen implicated Kerman, and she spent 15 months in jail, away from her now-husband, Larry Smith. Some names and details have been changed, and Jansen and Kerman are now Vause (played by Laura Prepon of That ’70s Show) and Chapman, played by Taylor Schilling.

Sipping a bottle of water and wearing wardrobe prison scrubs, Schilling sits in her dressing room after a long day on set. “It’s very important to me that we’re telling Piper Chapman, not Piper Kerman’s story. The prison – Litchfield – is somewhere between fiction and the real-life penitentiary. It’s liberating to not feel bound by Piper; it could be incapacitating.”

For the lead role in a high-profile new drama, Schilling is not a well-known name. Her sole TV role to date was in hospital drama Mercy, but she recently played Ben Affleck’s wife in Argo. The small role was heavily cut, and Schilling likens herself to Kevin Costner in The Big Chill (“doesn’t he just end up as a body where you never see his face?”), but she is warm in her praise for the director. “Ben is extraordinary. It was wild. I mean, I was in something that won an Academy Award. He better frickin’ cast me in another movie.”

Schilling as Chapman/Kerman is part of an overwhelmingly female ensemble cast. Chapman’s husband is played by Jason Biggs, but women dominate the cast, which runs the spectrum from non-actors to seasoned names. Kate Mulgrew (familiar to many as the TV wife of Columbo and Capt Janeway in Star Trek: Voyager) plays Red, a matriarchal Russian, a split atom of tough and kind. As the prison cook, she is well-placed to both observe all around her and bargain for favours. When I meet Mulgrew, she attempts a reasonable Irish accent and tells me how much she loves Dingle, before gushing about Red.

“She has a great capacity for love, and for allegiance, which most of the other characters haven’t learned yet, and that’s what Red teaches them. But the main reason I got involved was Jenji.”

Where race, class and age intersect
Here she is referring to Jenji Kohan, the show’s writer, who created award-winning series Weeds. Between scenes, in a setting of accidental realism, Kohan gives interviews in the cramped prison waiting room, at a small table with no elbow room.

“I’m always looking for those spaces where every race, class and age intersect – and prison is just that. It seemed like a great environment to filter every story through. So we start with a yuppie’s eye-view of prison, as our entrée, but once you’re in, you can tell all these stories – of racism, the cycle of poverty, the abuse of women – that you’d never be able to sell a whole series on.”

Several aspects of Orange Is the New Black are shamelessly meant to push heart-warming and uplifting buttons, but serious topics are tackled head on, from drug use and class to lack of education. A mother and daughter end up as co-prisoners; visitation issues are explored; and a character gives birth inside.

Kohan wanted to replicate the experience as authentically as possibly, visiting several penitentiaries for research.

“I asked a warden about the difference between men and women’s prisons,” says Kohan, “and they replied that women’s prisons are communal, because women help each other. Women end up in jail for very different reasons, but often it’s because of the men in their lives.

“After reading the book and making this show, I went home to my kids and said ‘never get sent to prison’. It’s a deeply flawed system, but I don’t know how to reform it. My job is to entertain but maybe some of the issues the show will raise will enter the public debate about how we choose to incarcerate.”

Television’s landscape has changed; from the way we consume or view it, to how roles for women have improved. If a show such as Orange Is the New Black proves anything, it’s that women are beyond passive roles, as ancillary sidekicks to leading men. Mulgrew is a veteran of Hollywood’s vagaries, and well aware how women of a certain age struggle to find acting work. She has never played “fluffy characters” and admits that the cast’s younger actors look up to her.

The glass ceiling
“A lot of them have come up to me to say, ‘I just loved you as Capt Janeway’, which makes me really proud. Star Trek was 18 hours a day, for 7½ years. I raised two boys, broke the glass ceiling in TV and did the best I could. It was diabolically difficult, and I wouldn’t want to repeat it but when it was over, I said to myself: ‘you really did something’”.

A predominantly female cast doesn’t necessarily translate into a smash-the-patriarchy feminist show (see Desperate Housewives, Sex and the City), but the tone is noticeable here.

The Bechdel Test
For Taylor Schilling, this is both important and distinctive. “Very few shows focus on so many women, where it’s not about them being a wife, or reacting to a man or being in a relationship with a man. It’s so unusual to get sent a script where the woman is taking the hero’s journey.”

So it definitely passes The Bechdel Test (a test created by US cartoonist Alison Bechdel to see if a work of fiction portrays at least two women who have a conversation about something other than a man)? “We were all just talking about that – it so does,” laughs Schilling.

We’re invited to watch some filming, and, standing hushed behind the cameras, there is a palpable camaraderie between the cast. Jenji Kohan is immensely proud of this ethos, and the characters she has created. “Turn on this show and there are 100 women – the men are almost auxiliary to them. I haven’t seen that in television, and I think it’s thrilling. I didn’t set out with a gender agenda, but this is a female show and it’s badass.”