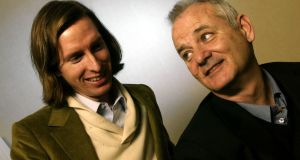 Wes Anderson and Bill Murray: “Without me they all would have faded out a decade ago.” Photograph: Anne Cusack /Los Angeles Times

Something odd has happened to the April Fool’s joke. At some point, companies convinced themselves that pranks were mandatory, and that they themselves were uniquely gifted to deliver them. The result is that April 1st is now a scattered landscape of remedial fakeries, all brewed up by the people who clap when their plane lands.

While there was some joy in the fact that Elon Musk – a man who has the comedic instincts of a lasagne – accidentally wiped 7 per cent of his market value by joking Tesla had gone bankrupt, for the most part pickings were slim.

One notable exception was on Reddit, where the site’s Ask Me Anything (AMA) section hosted an interview with director Wes Anderson.

“I’ll be fielding questions about all of my critically acclaimed, generally applauded and symmetrically brilliant films,” chimed the reclusive cineaste. “If I respond to you in French on accident I apologise. I’m not French, I just do that sometimes.”

Notably reclusive directors often affect a sphinx-like command of their own mythos, parcelling their process off in bitesize pieces. Not so user Best_Anderson, who admitted that when filming his immaculately helmed films, “most of the production budget goes towards levels and rulers”.

When asked how he got such mega-watt talent to work with him time and again, he shot back: “Without me they all would have faded out a decade ago.”

“I remind them of that often. We pay them very little and they sleep on cots that are all evenly spaced in Jason’s basement”.

Of course, the interview was unreal, in a very real sense, concocted by staff as a goof on the day, alongside similar – though comparatively leaden – Q&As with The Rock, James Cameron, Josh Brolin and others. In a spectacular double bluff, Reddit had managed to hide their joke in plain sight, nesting a funny fake interview in between half a dozen comparatively drab and lifeless ones.

And it worked. “Wes Anderson’s Reddit AMA Might Be One Of The Greatest of All Time” declared Esquire, who claimed “no one is better at making fun of Wes Anderson than Wes Anderson himself”. Along with Hypebeast, High Snobiety, and several other sites, many thousands of people were suckered in.

For those internet denizens who felt short-changed, however, all was not lost. The real Anderson had done a very funny and free-flowing interview for Adam Buxton’s podcast, released just one day earlier. And, while it lacks impromptu French or cast slandering, the hour-long ramble through his career should be a fair consolation for anyone slighted by Reddit’s nugget of fool’s gold.