Weekend TV guide: 14 of the best shows to watch

Brendan Grace’s wife and daughters on The Late Late, plus all-new IACGMOOH, War of the Worlds on BBC1, songs of the Irish wars, and Guy Martin tries tractoring 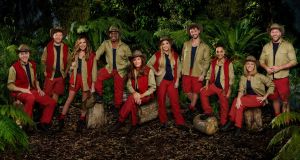 The Late Late Show
Friday, RTÉ One, 9.35pm
Four months on from the death of comedian Brendan Grace, Brendan’s wife Eileen and daughters Melanie and Amanda will talk to Ryan Tubridy about coming to terms with Brendan’s death, and to express their gratitude for the kindness of people throughout Ireland during his illness and when he passed away in July. Also: US crooner Harry Connick Jr and Irish folk singer Mary Black will join the RTÉ Symphony Orchestra for separate special performances. Plus: 50 members of RTÉ’s Youth Assembly on Climate will be in the studio with their answers to the climate question; and art from Banksy and Andy Warhol will be on display as presenter-turned-artist Thelma Mansfield discusses this weekend’s art fair, Art Source.

Did you know there’s a veterinary clinic solely dedicated to cats? RTÉ’s cameras take us inside Cat Hospital in Glanmire, Co Cork, where Claire Meade and her moggy medics work hard to fix feline ailments and nurse their pussycat patients back to health. If cats give you the collywobbles, you may want to change over to the doggy channel, but cat-people will be glued to the stories of Paulina, who has a growth on her throat; Del Boy, who is terminally snobby; Curley, who has bitten off more than he can chew; and Whitney and Bobby, who are infested with “chiggers”. Charming.

BBC Children in Need
Friday, BBC1, 7.30pm
The annual telethon used to last one night only, but these days it’s almost a festival. This week we’ve had a DIY SOS special and Rylan Clark-Neal performing a 24-hour karaoke marathon on BBC Radio 2, among other shows. A couple of weeks ago we were treated to Got It Covered, in which actors recorded a fundraising album, while It Takes Two announced which EastEnders stars were set to take part in a Strictly spin-off. Now the main event is taking place. Tess Daly, Ade Adepitan, Graham Norton, Mel Giedroyc and Marvin and Rochelle Humes return as hosts, with comedian Tom Allen joining in the fun. Among the treats we can look forward to is that EastEnders-themed edition of Strictly Come Dancing.

Mountain Vets
Friday, BBC2, 8pm
The Mountains of Mourne have been declared an Area of Outstanding Beauty. They also contains more animal residents than people – humans are outnumbered six to one. As a result, the nine local vets and nurses are always kept busy, and in this new six-part series will show them in action. The Northern scenery is stunning and there are different problems to solve. For instance, Noel Fitzpatrick never had to treat a calf with five legs, which happens here. Throughout the run we’ll also meet rescued seals, overweight cats, horses in need of emergency surgery and many other cases.

They’re indestructible and they’re pop gold: 1980s icons Martin Kemp from Spandau Ballet and his wife Shirlie Holliman from Wham! join D’Arcy to look back on their pop lives and why, after 31 years of marriage, they've finally recorded an album together. Also: Fair City cast members Wes Doyle, George McMahon, Adam Traynor and Johnny Ward join members of Baldoyle United Football Club to tell all about their upcoming charity football match. Plus: Nasa datanaut and Miss Universe Ireland Fionnghuala O’Reilly on women who code and the upcoming Miss Universe competition in Atlanta; Anna Kearney (13) on representing Ireland in Junior Eurovision ahead of the competition in Gliwice, Poland next week; and GP and mental health expert Harry Barry on the negative effects of social media and what measures we can take to safeguard our mental health.

The Hit List
Saturday, BBC1, 6.25pm
Marvin and Rochelle Humes return for a six-part run of the music-based quiz show, in which contestants must name as many hit songs and artists as possible under intense pressure, with a £10,000 jackpot up for grabs. Their knowledge is put to the test across three rounds as they attempt to identify huge hits across various decades. In the first episode, sisters Sara and Vanessa from London, friends John and Rachel from Glasgow, and father and son duo Fluff and Freddie from Kent take part.

This 2016 documentary celebrates the career of Essex-born football icon Bobby Moore (1941-1993), who led England to its 1966 World Cup victory against Germany. It explores his later personal struggles and features contributions from family, friends and celebrity fans, including Pelé, Wayne Rooney and Paul Gascoigne. Originally, proceeds from the film went to the Bobby Moore Fund, a charity which raises awareness of bowel cancer, the disease that killed Moore.

For the past three years, Australian TV drama Doctor Doctor has gone down a storm with viewers on home turf. For whatever reason, the show was renamed for this neck of the woods, but the saga of heart surgeon Hugh Knight, working as a country GP in his former home town of Whyhope, has lost little of its appeal. As the saga returns for a fourth run, Hugh (Rodger Corser) becomes distracted by the arrival of Tara, an alluring new doctor. In the second of the double bill, Hugh’s superiority has left him without a cardiac unit – and minus a job.

The War of the Worlds
Sunday, BBC1, 9pm

HG Wells’s famous sci-fi tale of Martian invaders has entertained generations of readers, but film-makers and TV producers have had a tough time adapting the story for the big or small screen. Orson Welles’ 1938 radio production was a huge success – scaring the bejesus out of Americans who thought an invasion was really happening, but Steven Spielberg’s 2005 film starring Tom Cruise and set in this century was a pointless exercise that barely raised a thrill or chill. For me, the story only works in its original setting of Edwardian England. The shock of the alien technology and brutality ripping apart the genteel fabric of late 19th-century life was what provided the tension, as ordinary folk are forced to flee their drawing-rooms without even their morning jackets to escape the alien terror. This three-part first-ever adaptation set in the novel’s original time stars Eleanor Tomlinson, Rafe Spall and Robert Carlyle. Alas, Jeff Wayne won’t be doing the music. Is the world ready for a sci-fi costume drama featuring hansom cabs dodging death rays? We’ll see.

I’m a Celebrity . . . Get Me Out of Here!
Sunday-Friday, Virgin One/UTV, 9pm
Everyone from former speaker of the House of Commons John Bercow to Girls Aloud’s Nadine Coyle was rumoured to be taking part in this year’s series, while presenters Ant and Dec have suggested that their dream signing would be Richard Madeley. Now we’ve gotten our first look at the class of 2019 before they arrive in the jungle. Coyle is in there, along with Caitlyn Jenner, Kate Garraway, Ian Wright, James Haskell, Jacqueline Jossa, Myles Stephenson, Adele Roberts, Roman Kemp and Andrew Maxwell. After all these years, the “celebs” should have a pretty good idea of what they’re letting themselves in for, but the realities of roughing it in the camp (not to mention those infamous Bush Tucker Trials) can still be tougher than they ever imagined. And on the off-chance they’ve been preparing by sleeping in the garden and sticking their faces into bowls full of bugs, we’ve been promised some surprises.

Ceol Chogadh na Saoirse
Sunday, TG4, 9.30pm
With 17 new original recordings of songs associated with the Irish War of Independence and Civil War, Ceol Chogadh na Saoirse explores the complex relationship the Irish people have with these songs and how it has changed over the lpast 100 years. By examining the works of notable song writers such as Peadar Kearney, the first programme shows how the songs that were instrumental in igniting the War of Independence and keeping up morale during some of the darkest days, were subsequently shunned by the newly established Free State government

Just when you thought you had seen everything, along comes speed demon Guy Martin with one of his quirkiest projects yet. He hopes to win a Guinness world speed record in, you guessed it, a tractor. Martin has not chosen this random machine for the sake of it – he is a “wannabe farmer” who does a bit of ploughing and muck-spreading in his own tractor. Over the past 12 months, he has been working with JCB to produce the world’s fastest tractor, and naturally his quest to be the fastest Guy on Earth led to one of his most unusual challenges.

Reggie in China
Sunday, BBC2, 9pm
This new series sees Reggie Yates travelling to China and visiting four very different cities. His first stop is Shenzhen, which over the past 40 years has grown from a region dominated by fishing and farmland to a bustling metropolis that is home to 12 million people and at the centre of the country’s technological revolution. He meets the inventors of an earpiece that uses algorithms to translate speech into other languages, discovers more about the differing attitudes between generations, and witnesses a demonstration of a flying motorcycle.

Many people dream of changing the world, but few of us can claim to having done it. But engineer and computer scientist Tim Berners-Lee can proudly hold up his hand on that score. The man with more letters after his name than a hand at Scrabble will be talking about his aspirations for the future of the world wide web, which he invented 30 years ago. The talk takes place at London’s Design Museum, and is hosted by Jonathan Dimbleby.