TV review: The Blindboy leads the blind in the Rubberbandits Guide to Money 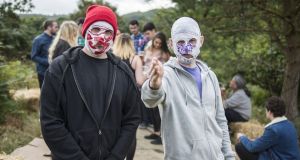 “Don’t try and make sense of something that doesn’t make sense,” insists a talking fish. “It’s completely arbitrary.” A trout, with a molasses-thick Limerick accent, who has recently bought a home, and is currently operating an electric strimmer, he may be on to something.

The topic of conversation in the first of The Rubberbandits Guides series (RTE 2, Mondays, 10.30pm) is money, a subject that was already surreal before Blindboy Boatclub and Mr Chrome decided to take up economics. Since the Rubberbandits first came to attention, in a rustle of comic rap and shopping-bag balaclavas, the funniest part of their shtick has been a snarling display of confidence over a loose grip of the facts. It’s as though they studied politics, history and art in a chaotic and ketamine-addled session gaff.

Once fleetly summarising Irish history from “the great potato famine of 1916” to Éamon de Valera’s subsequent death on hunger strike, a typical Rubberbandits gag is reliably crude, but placed within a kind of art comedy that is more Dada than juvenile. To begin this new series, the Bandits and their director/co-writer James Cotter seem intent to discover in how many directions their guide can spin at once.

The last thing they are is lazy. At one point, a deliberately weak joke about currency and value comes with an ad-libbed review of their own satirical prowess (“That was record levels of satire!”), and so they pull away away from anything so obvious, so radically devalued.

Nonetheless, in this economy, their talking trout friend is something even more implausible – a new homeowner – and watching him slip from a life of hard partying into a domestic routine measured out in vegan sausages and Kodaline tickets still counts as wickedly funny observation.

Elsewhere, familiar phenomena are archly transformed. Explaining a choppy economy as an ever-shifting obstacle course that is being run by a transnational employee, civil servant and entrepreneur would be hackneyed enough to work as a David McWilliams analogy. But here it flies, thanks to the fast pace of new ideas, wrong-footing editing, way-past-the-watershed remarks and contentedly cheesy graphics. There’s something particularly satisfying about a show that looks like it could have been shot on a borrowed phone while someone keeps sketch for the security guards, among a chaos of DIY props and effects. The Rubberbandits defining style, creative and resourceful in a punishing economy, is as instructive a guide as anything else here.

With just one brief attempt at a rap, you miss the music, but at least they take a fresh approach to crowd interaction. Loosely explaining rivalling ideologies to randomers, they conduct a straw poll on Ireland’s favourite ideology. Marxism and Transhumanism just beat out “Isis” (Capitalism gets no votes). “The people want communism, holy war and robots . . . I’m as confused now as I was at the start,” worries the Blindboy leading the blind. But these guides seem pretty sharp-sighted to me.