TV review: Portillo’s predictable train of thought, and a wild ride to the US presidency

Michael Portillo is chasing his Brit-centric idea of the US, while Cal Saville’s plan for taking the Oval Office is all slogan and no substance 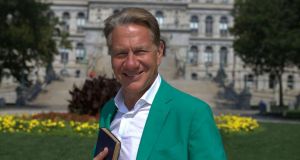 A Spanish-born Eurosceptic and Brexit champion, Michael Portillo is not looking for the true history and legacy of the locomotive America but a more elusive ideal of England, one that has gone firmly off the rails.

All political careers end in failure, we know, but at least one is bound for Gettysburg.

At least, that’s the destination of Michael Portillo’s Great American Railroad Journeys, now halfway through its first season on BBC Two, in which the former Tory minister and “darling of the right” takes a sentimental journey through the former colonies. His path is informed by a trusty leather-bound guidebook, Appleton’s General Guide to the United States and Canada, from 1879, which is probably no less reliable than the current Rough Guide, and may help to explain why Portillo seems to regard American independence as an endearing, possibly temporary quirk.

Those who have been following Portillo’s rebirth as a media figure with a seemingly limitless collection of brightly hued sports jackets may notice a faint blush of similarity to previous projects such as Great British Railway Journeys (in which he was assisted by a 1863 guidebook for seven series) or Great Continental Railway Journeys (assisted by a 1913 guidebook for four). So, as a sepia map traces his current adventure in lines that resemble a reversed question mark, you could be forgiven for thinking he is now merely going through the motions.

As a presenter, he certainly is, relying on a grand unclasping and reclasping of his hands, as though playing an invisible hand organ. His tune rarely alters: a soupçon of history, a bite-sized interview with a representative of the plain folk, a self-deprecating gag and a nation-deprecating remark. In Philadelphia he admires plinths, spurting fountains and skyscrapers, and if this weren’t already enough for armchair Freudians, he exclaims, “Philadelphia, laid at my feet!” a priapic conqueror.

Portillo makes for a likeable companion nonetheless because of his fascinating awkwardness, his lingering ambiguity. “It’s been a real joy sharing lunch with you,” he tells a stranger, quite earnestly, after a clearly joyless and gloop-filled Philly Cheesesteak, as though there might still be a vote in it. In an Atlantic City casino he charms his way into a poker table, declares himself good luck and offers to stay, bolting away as soon as he is accepted (“Actually, I have to go”). An infamous supporter of capital punishment, his interest perks up with a visit to Eastern State Penitentiary, a 19th century Quaker experiment in corrective isolation that Charles Dickens considered “a slow and daily tampering with the brain… immeasurably worse than any torture of the body”. Portillo, apparently gregarious, considers isolation the worst form of punishment. Which may be why he favours lethal gas.

Otherwise, he compares anything he encounters in America to an English equivalent. The exhibition halls in Philly would dwarf Crystal Palace; American Football (for which he kits up, immensely pleased) is “derived from British rugby”; at one point, passing through Philadelphia, he quibbles unhappily with his historic guide: “With apologies to Appleton, it doesn’t in any way remind me of England.”

More than the nostalgic plumes of the functioning steam engine he rides on the Strasburg Railway, or his uncontainable glee to find a young station master with an artfully waxed moustache (a recreationist, perhaps, or just an East Coast hipster) that, you realise, is what Portillo is looking for. A Spanish-born Eurosceptic and Brexit champion, Portillo is not looking for the true history and legacy of the locomotive America but a more elusive ideal of England, one that has gone firmly off the rails.

For another very British view of the US which seems to say considerably more about the viewer, try How to Win the US Presidency, arriving to Netflix this week as buoyantly as a Clintonian cascade of star-spangled balloons and with all the topicality of a Trumpian torrent of hate speech.

Like Portillo’s programme, Cal Saville’s amped-up documentary is guided by a sense of historical fascination, wry observation and utterly undisguised infatuation. But unlike Portillo, the tone of Saville’s programme is so unsure of itself and shot through with so many American inflections it could pass for an ebullient entry in the green card lottery. Saville, whom we never see, is writer, director, producer and narrator of the show, which may give us an idea of the cost-effectiveness of 3DD, an independent London production company of music and history documentaries and an employer of a great number of Savilles.

Advertised as “whimsical”, Saville’s mode is actually something far giddier, like a history grad student’s goof. Combining talking head interviews with English academics and journalists, with a terabyte of found footage from various archives, it can’t decide whether it is a serious documentary compromised by its frivolity, or a frivolous documentary redeemed by its seriousness.

In a blurted history of America, for instance, over drawings and stock clips that are forever swiping and zooming, Saville’s estuary tones tell us how, in 1776, America declared its independence from King George “and his fabulous clothes”. Later, comparing American democracy to that of the Roman Republic, he offers, “Heck, even the symbols are the same!”

That ill-fitting “Heck”, however ironic, suggests a television programme without any persuasive voice of its own, no matter how fabulously it is dressed.

It’s a shame, because at a time when the US presidential elections look more monstrous than ever, in a race between a free-associating narcissist who is easy to loathe and an uncharismatic robot who is difficult to like, some historical perspective on how we arrived at this mess would be much appreciated.

Finding among his exclusively English assessors, “an unbiased and level-headed” approach, Saville divides his show into headings (Money, Celebrity, Religion, The Look, Family, The Message – all of which, I understand, are important to have) with the fidgety energy of someone almost neurotically afraid to appear boring. The consequence is that the programme is oblivious to both its bias and carelessness.

Sure, it’s got an admirably clear explanation of the Electoral College system, and a breezy attention to historical marginalia: Warren Harding’s carefully concealed philandering; JFK’s partly concealed chronic ill-health; Andrew Jackson’s nerveless appropriation of the jackass – a slur – which would become the Democratic Party’s insignia. It also has a pronounced taste for notable quotables. One that leaps out, at the time of our watching, belongs to Dwight Eisenhower: “Anyone who wants to be president is either an egomaniac or crazy.” You can decide who’s who.

A reliance on such blips is telling, though, because even as one don insists the art of being US president is the art of rhetoric, the documentary is far more fascinated with the art of slogans: Keep Cool with Coolidge, I Like Ike, Let’s Make America Great Again, Yes We Can. That’s a neat history of political advertising, tailored to contemporary attention spans, but the documentary doesn’t go any deeper. You don’t have to be Walter Mondale to ask, Where’s the Beef?

It doesn’t help that only one contributor here is a woman, and that even she speaks, in awe-struck tones, of the presidency as the exclusive pursuit of a single gender: “When that person is elected it seems like that person is the father.” Another pundit even mischievously predicts a Trump presidency, carried once more by the “silent majority”.

Saville concludes, moreover, with what seems like a non-sequitur, the thoughts of Ulysses S Grant on the art of war. Maybe he’s right. Winning this presidency will likely involve carnage, but the opportunity to make something beautiful of it has long since left the station.