Trust Me review: Jodie Whittaker gets her first doctor’s internship

How long will it be before Jodie Whittaker’s A&E doctor is found out? Longer than it takes for the many implausibilities of Trust Me to unravel, hopefully 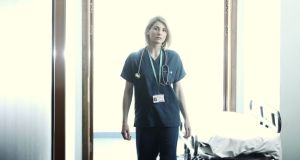 Faking it: Jodie Whittaker plays a nurse pretending to be an A&E doctor

Just as the rise of the mobile phone obliterated one reliable predicament of the horror movie (“The phone line’s dead!”), so the prevalence of internet searches and social media profiles has made it much trickier for anyone constructing an imposter drama. (And for imposters too.)

Just imagine how much shorter a film Catch Me if You Can! would have been if nobody understood why Leonardo DiCaprio’s character wasn’t on Facebook. One of Frank Abagnale’s guises in that film, as an utterly unqualified hospital doctor (“Do you concur?”), might as well be the inspiration behind Trust Me (BBC One, Tuesday, 9pm).

Here Jodie Whittaker plays a dutiful Sheffield hospital nurse, Cath Hardacre, ready to turn whistle-blower over evidence of her hospital’s malpractice. Her own ethics, however, are not easy to determine. Suspended from work over charges of bullying – not wholly baseless – she quickly decides to take up malpractice herself.

“Anything you need from me – and I mean anything,” says her retiring medic friend, Ally Sutton, “and it’s yours.” Cath takes this literally, seizing Ally’s conveniently discarded CV, diplomas and entire identity, breezing into a job as an A&E doctor at a beleaguered Edinburgh hospital. Hey, how hard can it be?

Creator Dan Sefton finds himself in a similar position to Cath, caught up in improvisations and evasions in an effort to skirt past every implausibility. The challenge to Sefton, and to Whittaker’s performance, is whether to see Cath as a total psychopath, so nervelessly dishonest, self-assured and dangerous, or a decent, caring professional who snaps in an impossible situation.

Filming Whittaker in moments of muted panic, her heartbeat loud, they insist on the latter, nudged along by a profound scepticism towards doctors and a pulsing electronic soundtrack. That lessens the gravity of the set up – when one doctor needlessly offers an “I concur” to Cath’s diagnosis, it feels like a nod to weightless tellings of serious forgeries.

Director John Alexander even presents the crises of the A&E ward in woozy combinations of glare and haze, as though Cath’s risk of being exposed as a fraud is our collective anxiety dream. She is assisted, of course, by straight-talking Scottish nurses who instruct her with earthy directness: “Basically, just make a bloody great hole with a forceps.” Perhaps this is what Michael Gove meant when he said Britain has had enough of experts?

Whether she is given away by her sympathetic beside manner, or simply her legible handwriting, it’s just a matter of time before Cath is found out, of course. Whittaker’s assured performance helps Trust Me get away with its own unlikelihoods – but for how long? Given that she will soon make history playing another doctor for the BBC, whose identity will always be a question, this may just count as a beneficial internship.

New Irish Writing: A Little Cloud by A Joseph Black
8