They think it's all over. It is now

Off the Ball’s biggest story this week was off air, so could Ger Gilroy play super sub? 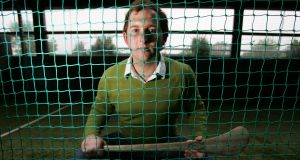 It was the end of an era, as swift as it was unforeseen. Ger Gilroy, unexpectedly thrust into his new role as host of Off The Ball (Newstalk, weekdays), acknowledged as much as Monday’s show started. Sport is a cruel game, Gilroy commented, in which you don’t always get to pick the time of your leaving. It wasn’t about the surprise absence of the acclaimed sports show’s usual presenters of Eoin McDevitt, Ken Early and Ciaran Murphy, but the parallels were obvious.

For the benefit of confused listeners, Gilroy explained that “the lads” had tried to convince Newstalk management to start their programme an hour earlier every night at 6pm.When this proposal was rejected the team resigned. Gilroy paid generous tribute to his erstwhile colleagues, but this only amplified the shellshocked and bereft atmosphere.

Given all this, the show went well. A seasoned broadcaster and the original presenter of Off the Ball , a decade ago, Gilroy had the experience and knowledge to ensure his interviews were enlightening and entertaining. He elicited anecdotes of training-ground punch-ups from regular soccer contributor Pat Nevin that were both frank and funny.

But the show missed the sparky chemistry that has become its trademark. Its old freewheeling ambience, particularly the meandering exchanges between McDevitt and Early, took time to evolve, and is unlikely to be easily replicated.

Gilroy did well to ensure the improvised replacement was an authoritative-sounding sports show with professional values. But such programmes are readily found elsewhere, most obviously in the form of Game On (2FM, weekdays), Montrose’s much-heralded but rather arid magazine show, which now finds itself in the position of a callow pretender seeking battle with a superior incumbent, only to see the opponent march off in a huff. At its best, the Off t he Ball of yore was so much less than a slick product, and all the better for it.

Nonetheless, if Gilroy’s assessment was accurate, McDevitt and his compadres arguably overplayed their hand. With Newstalk’s daytime schedule already overpopulated with male presenters – an all-too-common trait in Irish radio – bringing Off the Ball ’s blokeish banter forward by an hour was unlikely to attract those coveted female listeners who have so far proved immune to the metrosexual charms of George Hook.

This overarching lack of diversity was underlined last week on Newstalk Breakfast (Newstalk, weekdays), when copresenter Norah Casey hosted an item that brought new perspectives to a pressing issue frequently relegated to the margins.

On Monday, Casey spoke to the Danish academic Tine Rostgaard about the Scandinavian childcare system and the lessons it held for its Irish counterpart. Predictably enough, Denmark came across as a bountiful paradise of extended parental leave, subsidised creche facilities and state-funded childminders. But, according to Rostgaard, there was more to the Nordic model than mere state largesse. By enabling more women to work, and thus producing double-income families, the system ensured much lower child poverty rates. Nor was such a system impossible in Ireland, at least in terms of funding: instead, it was a matter of prioritising investment in infrastructure over cash payments.

But Rostgaard’s most arresting observation was that childcare in Ireland seemed to be framed as a women’s issue. “I think it’s a family and societal issue.” It was a view shared by her host. When one listener tweeted that “the Irish model of raising a child in their own home is still great”, Casey gave a pointed response. “I’ve paid the equivalent of a small house in Leitrim in terms of childcare costs,” she said. “The problem [in Ireland] is you have women who can’t afford to go back to work.”

Notwithstanding chronic unemployment, the Irish approach deprived families of vital potential income, while implicitly suggesting an issue of vital importance was somehow unworthy of the attention of earnestly busy men. Casey may not possess the most electrifying on-air persona, but she brought much-needed balance to a radio landscape in which, for example, the male-oriented subject of sport is discussed hourly.

Of course, sport has wider lessons to impart. On Wednesday, the Cork hurler Donal Óg Cusack spoke on The John Murray Show (RTÉ Radio 1, weekdays) about his experience of coming out as a gay man in the robustly heterosexual world of the GAA. While he hoped that his example might inspire people grappling with their sexuality, Cusack was keen not to be pigeonholed by what Murray termed his “new status”, preferring to see himself as “a sportsperson who happens to be gay”.

It wasn’t the only time Murray employed ill-considered phraseology. He recalled an incident in which a spectator verbally abused Cusack with “very personal stuff about what you get up to as a gay man”.

“Or what he thought I got up to as a gay man, anyway,” his guest replied drily. Such gaffes aside, Murray proved a successful foil for Cusack. The presenter’s naturally manly instincts meant that Cusack’s sporting side did not play second fiddle to his personal story.