The Handmaid’s Tale: A truly moving close-up of sex slavery 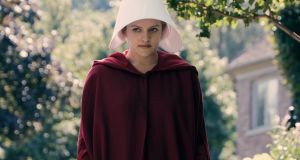 Elisabeth Moss as Offred in The Handmaid’s Tale. Photograph MGM/Hulu

There is something uniquely horrifying about having Elisabeth Moss star as Offred in the new adaptation of Margaret Atwood’s dystopian masterpiece The Handmaid’s Tale. For most, she will be etched into popular culture as the dogged Peggy Olson,a character audiences have cheered on, seeing her  thrive, moving from shy secretary to confident copywriter, succeeding as the very image of the modern woman in the testosterone drenched world of Mad Men.

Now, as Offred stripped of her civil liberties and bodily autonomy she is trapped in a backwards fairy tale, her character watching as the achievements and freedoms of women rapidly deplete. This nightmarish vision is not something that can be dismissed as past primitive behaviour, as the United States of the republic of Gilead is a parallel universe, a near future that edges ever closer.

It’s a place of civil war, of environmental disaster that is ruled by a totalitarian, religious fundamentalist government who deal with the decreasing birth rates by forcing lower-class women into sexual slavery as reproductive servants for the infertile elite.

Unlike the 1990 Harold Pinter-scripted film version of the novel, this take on The Handmaid’s Tale is filled with realistic modernity, not the removed, almost sci-fi coldness of its predecessor. Jumping from memories of the beginning of Offred’s time in captivity and memories of “the before” – we see the familiar, small moments of ordinary pleasure where a pre-Handmaid June (Offred) and her friend Moira enjoy a joint at a summer barbeque or a day out at the aquarium with her family.

These identifiable, mundane memories are juxtaposed with the harrowing events within the Red Centre where the women are trained up to perform their “duties” reinforcing how ordinary acts of independence are taken for granted and the ease in which the rights of the women were decimated.

The 10-part Bruce Miller series is shot through with the hazy sunshine of a flattering Instagram filter, deep reds, honey golds and gem tones and an attractive New England quaintness that transform it into a dramatic Norman Rockwell painting. A simplistic, patriarchal idyllic world for some, a brutal living nightmare for others.

It is this dreamy softness of the cinematography that makes the banality of evil even more upsetting and disturbing. A picturesque walk by the river is interrupted by the gruesome triptych of the bodies of a doctor, a priest and a gay man hanging over the quayside, swinging in the sunshine. The glossy uniformity of the supermarket revealed to be a place of paranoia and tension by the nervous Handmaids who stutter information whilst scanning the aisles. The jade of Serena Joy’s gown, a silent sea flowing beneath Offred’s rigid body as she undergoes the torturous subjugation of The Ceremony.

There are no safe spaces as the women are observed by the ever-present Eye (the Gilead secret police) the whispered conversations, bowed heads and the necessary invisibility of the Handmaids make it feel as though a breath can never be fully exhaled by them in this world of relentless dread and fear.

When this grinding tension is broken in a furious act of violence which sees the women tear apart a man accused of rape with their bare hands, Offred’s face comes alive from this stunned somnambulance with a suppressed rage that is incandescent and hints at the internal strength she needs to survive.

It is Offred’s story, her point of view told through a series of voiceovers, that act like explosive diary entries, puncturing the oppressive routine of her life revealing the truth. It is Elisabeth Moss’s tiny reactions, her expressive face, enormous liquid blue eyes framed by the “wings” of her Handmaid’s bonnet in a series of almost intrusive close-ups that are truly moving.

With a flicker of an eyelid or a strained swallow, she portrays the stupefied shock of an intelligent, educated once-free woman caught in this bizarre hell determined to break free at any cost.