The Cards get set for another shuffle 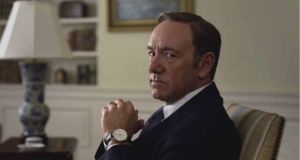 Today is House Of Cards Day and expectations are high for the third season of the political drama. When we last saw Frank Underwood, he was sitting pretty in the Oval Office after becoming president of the United States.

He was finally at the top of the tree but, as all good students of Machiavelli know only too well, what goes up must come down – which augers well for the new series.

Those same students also know that every success begets parodies and take-offs. We’ve already had Sesame Street’s fantastic “House of Bricks” so we got to wondering about some other possibilities involving Underwood talking to himself.

House of Cards: The Prequel
Frank Underwood comes face to face with Francis Urquhart from the original BBC series and the two men spend the entire 13 episodes talking in monologues and asides. Hey, it works in the theatre.

House Of Cads
Claire Underwood’s many exes arrive en masse in town to have a collective therapy session about her conniving, scheming and fringe fetish.

House of Carbs
No longer able to fill his belly with ribs at Freddy’s BBQ and nursing a dislocated shoulder after an inexplicable rowing machine incident, Frank takes to quaffing donuts, cakes and sandwiches in the White House and piles on the pounds.

House of Carells
There’s a new dastardly threat in Washington and that’s Steve Carrell and his evil identical twin. They’re even worse than the Koch brothers.

House of Cats
Frustrated at how his various schemes to get even with Frank have come to nowt, Raymond Tusk sends a wave of mutant blue cats to take over Washington and only Frank’s driver Edward Meechum can save the day

House of Kim
The Republican Party decide the only way to deal with Frank is to get someone other than a Bush elected – so they convince Kim Kardashian to be their candidate.