Television: Rising from obscurity – the women airbrushed out of Irish history 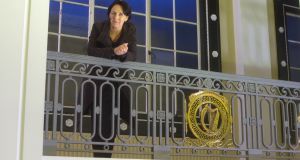 Just as unread books pile up beside the bed, their pristine spines staring accusingly, I wonder if it’s going to be the same with 1916 programmes. So many are piling into the TV schedules that I’ve started to consign some to the television equivalent of the book stack: recorded, with the vague notion that I’ll watch them later – but in truth probably won’t.

I tune in to just one this week, Seven Women (RTÉ One, Sunday), knowing that the reclamation of women’s roles in the Rising is one of the big stories of this centenary commemoration. Presented by Fiona Shaw, who tells the stories vividly but without stealing any limelight, the lively and absorbing film explores the roles played by seven women and one teenager: Constance Markievicz, the ace sniper Margaret Skinnider, the actor Helena Molony, the teacher Louise Gavan Duffy, the courier Leslie Price, the nurse Aoife de Búrca, the magnificently unlikeable Trinity provost’s daughter Elsie Mahaffy, and the teenager Mary McLaughlin.

Examples multiply to show how these women were mostly busy, committed, long-time political and social activists in the run-up to Easter 1916 but quickly found themselves sidelined when the fighting began – whereupon they had to conduct their own mini battles to fight being put on sandwich-making duty.

Filmed in Rising-related locations around Dublin, with fascinating archive film and evocative re-enactments using the women’s own testimonies, Seven Women quickly paints a picture of the women’s seriousness and commitment. It makes their airbrushing out of history – Markievicz excepted – so frustrating. It’s a feeling that simmers beneath the film; as the historian Lindsey Earner-Byrne points out, the women weren’t accidentally forgotten: it took considerable effort to sideline them out of the history books.

The new Danish thriller Follow the Money (BBC Four, Saturday), about greed and white-collar crime, gets off to a familiar crime-drama start. On a grey, grainy morning – the series uses the standard Scandi-crime palette – a body is fished out of the sea near some wind turbines, and a top cop – or, this being a Danish drama, a low-key, sensitive but still slightly rugged detective – Mads (Thomas Bo Larsen), strips down to his skivvies and dives in to retrieve evidence from the water.

He quickly establishes that the death is somehow linked to an energy company, Evergreen, and its exploitative employment practices. And while that is going on – the scenes are as choppy as the North Sea – we meet the company’s chief executive, Alexander (Nikolaj Lie Kaas), a high-profile media performer, adept at selling his company’s green-energy story, whom we see in a succession of slick glass-box offices.

But things aren’t as clean in the company as they appear: police are investigating share manipulation. (Mads is outside that loop.) The investigation is brought to the attention of the suave Alexander by the company’s ambitious junior lawyer Claudia (Natalie Madueño Wolfsberg). There’s also another key character, a young mechanic and ex-con, Nicky (Esben Smed), whose main role so far – two of the 10 episodes are shown back to back each week – is a bit sketchy.

The first episode is very slow, with a feeling that several plot boxes are being ticked before we can move on. But the drama has been created by Jeppe Gjervig Gram, a writer of Borgen. Fans of that series will remember that it made coalition politics in Denmark edge-of-your-seat stuff. And compared with pig farming in rural Denmark (even that episode of Borgen was fantastic), wringing compelling drama about the fine line between acceptable corporate activity and regulation-skirting greed should be a cinch – and worth staying watching for.

It takes until the end of the first episode of The A Word (BBC One, Tuesday) before the word is mentioned, but by then we amateur medics have already made the diagnosis: noncommunicative, in-his-own-world, music-obsessed Joe (Max Vento) has autism. But before we can even focus on the five-year-old’s complexities we have to cut through a lot of family drama – the tense kind where adults seem determined not to understand each other, to rub each other up the wrong way as only family can.

If the idea is to make us understand that communication is difficult for everyone, that people are different and that we all just need to get along, it’s done in spades. The adults are to the fore of much of the first, foundation-laying episode of this six-part drama written by Peter Bowker: Joe’s parents, Alison (Morven Christie) and Paul (Lee Ingleby), are busy pushing their fears about their son down so deep they can’t bear to let them surface when they are given the diagnosis; Joe’s bluff, plain-speaking grandad (Christopher Eccelston) – wait a minute, when did Dr Who start to play grandads? – can’t fathom his grandson’s ways: the child has headphones clamped to his ears at all times and knows every verse of an impressive number of pops songs.

“If I had my way I’d flush those headphones down the toilet,” he says before the diagnosis, and he’s no more sympathetic afterwards. Alison’s brother, Eddie (Greg McHugh), and sister-in-law, Nicola (Vinette Robinson), come to live next door in their chocolate-box Lake District village.

At times it’s slightly tricky to plug into the mood of The A Word: it’s so determined not to be cute or sentimental that it never stays on a firm emotional footing for long, sometimes veering from realistic domestic drama (Joe’s family) into corny-comedy territory, with Nicola and Eddie’s infidelity side story, which the entire village comments on. And Eccleston gives a strangely hammy performance.

The risk of delivering a great big spoiler means it’s almost impossible to write about the return of the excellent police drama Line of Duty (BBC One, Thursday). Remember the second series, which lovely DI Trottman (Jessica Raines) exited through a window? It was so breathtaking and unexpected that for several minutes you couldn’t believe it. Jed Mercurio, the series’ writer, has done the same in the first episode of the third series: it’s not defenestration but it is something as audacious – and my lips are sealed except to say that scene arrives it lights a flame under what has been a damply smouldering drama covering Line of Duty’s usual beat: what happens when corruption in the force chips away at the thin blue line.

First episodes usually give pointers to what happens next; this one whips them away in that scene. It’s very clever. You’d watch more just to see how Mercurio moves the story on, having apparently killed it.