Television: No superpower can save James Nesbitt’s detective dud 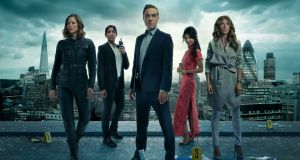 Lucky man: James Nesbitt and his bevy of femmes fatales

If I tell you that James Nesbitt plays a middle-aged London detective in the flashy-looking cop drama Stan Lee’s Lucky Man (Sky1, Friday) you can probably fill in the rest.

Harry Clayton’s marriage has broken up, but he’s still in love with his wife; he’s got an addiction (to gambling); and he’s a maverick, solving crimes while always at loggerheads with his by-the-book bosses. Clayton’s sidekick is a beautiful young detective who is probably a little in love with him. And he drives a vintage car (of course he does).

Into this loser’s life comes a mysterious, gorgeous young woman who, having brought Clayton some unaccustomed luck at a casino, decides to sleep with him. (This isn’t presented as a fantasy, just as what happens to not particularly attractive men in TV dramas.) When he wakes in the morning he’s wearing a mysterious bracelet that will be the source of a superpower: it’s going to bring him luck. (This is the script’s actual fantasy element.)

Other women in this week’s first episode include near-naked pole dancers – because where better to film a scene in which a policeman quizzes an informant than a place where a woman’s bare backside is rarely out of shot?

Just how the detective’s luck plays out will be revealed in coming episodes, but what we know now is that bad people are after the bracelet and that, as well as good fortune, the Faustian pact that Clayton has unwittingly entered has brought bad luck of the deadly kind to previous owners.

Stan Lee, the man who, as you have probably worked out, devised Lucky Man, is the comic-book genius behind Marvel Comics. Indeed Lee makes a cameo appearance in this first episode (of 10), which will delight his fans but won’t make up for the disappointment of Lucky Man.

There’s much hat-tipping to James Bond, including stunning aerial shots of London, Clayton’s designer suit (on a copper’s salary?) and even a speedboat chase on the Thames. But it feels like a cut-price copy rather than an homage. Nesbitt looks bored, as though he’s going through the motions – and on-screen boredom is catching.

In 2014, while researching the phenomenon of Islamist extremist groups in the UK, the director Jamie Roberts interviewed a father-of-four named Abu Rumaysah. He was a bouncy-castle salesman with a lock-up garage full of jumble-sale tat – and several black Islamic State flags, which Rumaysah said would soon be flying over 10 Downing Street.

Seen at the start of The Jihadis Next Door (Channel 4, Tuesday), Rumaysah comes across as a mouthy fanatic in a grim part of London, more to be smirked at than taken seriously. Now he’s one of the world’s most wanted men. Not long after the filming, and having been arrested in the UK for promoting his extremist views, he skipped bail and fled to Syria with his wife and children.

Rumaysah is suspected of featuring in an Islamic State, or Isis, execution video, so apparently proving what many fear: a link between nonviolent extremism and terrorism.

Roberts focuses on two other British-born Islamic extremists, Mohammed Shamsuddin and Abu Haleema, neither of whom, despite much prodding by the director, says he supports Isis: “Saying that’ll get you nicked,” Shamsuddin says in his broad London accent.

In a scene set up to shock, the two are shown Isis propaganda videos of executions as they eat dinner in a cafe. The two watch, casually comment and, disturbingly, laugh at scenes of brutal execution. Men are beheaded and others lowered into water in a cage. “Oh, look, he’s foaming at the mouth,” Shamsuddin says. They seem delighted.

The film-maker talks off camera about his conflicted feelings in giving these extremists the publicity they so clearly crave – and it’s a valid concern. Haleema’s pulpit is YouTube. Before filming one of his provocative speeches glorifying sharia law, the former London bus driver comments that his beard is soft because “I use moisturising cream for the hair, innit”. These men are narcissistic in so many ways.

Roberts shows us many times that Shamsuddin leads a tiny group of followers – really just a handful – and, more valuably, shows what we rarely see on TV: multiple scenes of much larger groups of ordinary British Muslims, outside mosques and on the streets, vociferously challenging these extremists. That at least gives the otherwise grim Jihadis Next Door a hopeful note.

The Hollywood character actor Arthur Shields was an armed rebel in his Dublin youth, a biographical nugget explored in Ar Son na Poblachta (RTÉ One, Monday) but one pretty much ignored in the history of 1916 we learned at school.

Shields and his better-known older brother, Barry Fitzgerald – real name Will Shields – made fortunes playing priests on screen, and Arthur worked for everyone from John Ford to Cecil B DeMille; he was even in Bonanza. As a Volunteer the 20-year-old fought throughout Easter Week, in the thick of it alongside James Connolly, and was arrested with other rebels after holding out as long as they could on Moore Street.

The new State didn’t celebrate Shields, the film argues, because he was the wrong sort of armed rebel: he didn’t fit the vision. Shields was a Protestant, didn’t speak Irish and had no interest in the GAA. When he was imprisoned along with other 1916 rebels in Frongoch, in Wales, he was alarmed by all their frequent praying and social conservatism. He quickly decided that the independent Ireland he had fought for wouldn’t be one that he, a socialist and liberal free-thinker, wanted to live in. After his release Shields went back to acting at the Abbey Theatre. It has to be one of the few cases of postconflict imprisonment making a fervent revolutionary lay down his weapons.

Ar Son na Poblachta, the first in a three-part series on forgotten participants in the 1916 Rising, successfully mixes interviews, archive footage and re-enactments to create, economically, a vivid – if economic – picture of a fascinating life.

Shields’s dramatic story gives tantalising hints that many more stories about this era could be told – not least how, for some (including Abbey actors), Dublin in the 1920s was a heady and bohemian place to live. It seems they had a ball.

I don’t remember that being in the history books at school either.

A Winged Victory for the Sullen: ‘There is anxiety all over the world’
Real news has value SUBSCRIBE