Television: Faces of a modern-day Exodus

Hassan, a teacher from Syria, pays €2,000 for a dinghy crossing from Turkey to Greece 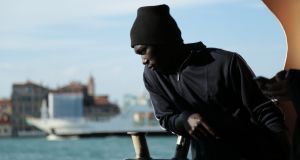 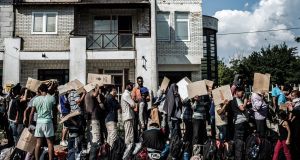 Refugees arrived from Macedonia waiting for papers to be processed in Presevo, Serbia. Photographer: Gus Palmer

Outside the foreign pages of newspapers the horrors of the refugee crisis have quietly slipped off the prime-time end of the news cycle. The global outcry to do something, which reached a crescendo last September, when the body of the Syrian toddler Alan Kurdi was washed up on a Turkish beach, was replaced by the hum of migrantphobia during the Brexit debates, when the Leave campaign pitched the refugee crisis in terms of quotas and barriers.

The brilliant Exodus: Our Journey to Europe (BBC Two, Monday-Wednesday) humanises the story, putting faces on the vast crowds we have seen crossing Europe’s borders and fields. The three-part documentary, filmed over a year, and mixing professional footage with that from migrants’ camera phones, follows the desperate journey of several people, mostly Syrians, as they attempt to reach Europe.

There is a life-and-death immediacy as the film goes along with the migrants in dangerously overcrowded dinghies and in cross-Channel lorries, or as they walk for miles, carrying babies, helping old people and pushing wheelchairs, and all with their entire belongings on their backs.

It is clear from the interviews that these are people who could never have imagined themselves leaving their homes and families to huddle under tents in refugee camps or sleep in Greek parks.

Every story features unseen human traffickers, showing how a profitable industry has grown up from the human desperation in the greatest movement of people in Europe since the second World War.

Hassan, a softly spoken 27-year-old English teacher from Syria, pays €2,000 for a dinghy crossing from Turkey to Greece; a tourist would pay €22 on the ferry. “People seem amazed that refugees have money, but we sold everything to make this journey – houses, cars, everything,” Hassan says.

But the dinghy is overloaded. Instead of the promised 30 people the traffickers have allowed on 65. It soon starts to sink, and Hassan’s camera phone – the migrants all rely heavily on mobile phones – records the quiet panic as they attempt to bail out the boat with water bottles. But it sinks anyway in Turkish waters, and they are brought back to Izmir. Hassan is alive, but his bag is gone. All he has left are the clothes he is wearing.

Hers is a multigenerational family of 16; the boat trip will cost €12,000. Her father owned a falafel shop in Syria; it was destroyed, along with their house, in a bombing. He is reluctant to put the family at risk of drowning – they have heard the stories of the deaths at sea, and some of the life jackets for sale from stalls in Izmir are fake, destined to sink. But Isra’a’s teenage cousin points out that shells fell on them all the time in Syria, so “how can we be scared of the waves?”

Always smiling, Isra’a talks of the family “building a new life”. But when we meet her again later, hundreds of walked and bussed miles away, she has seen two children die of cold at a chaotic refugee camp on the Macedonian border, where her own family spend days huddled in the rain and mud without shelter. Isra’a’s father worries how she will be able to handle all that she has seen.

A million migrants made the journey to Europe in 2015. So we follow Anas, who is 24, from the start of his journey in the destroyed city of Aleppo, to see what he and many others have left behind. When Anas leaves his partially bombed building for the airport, snipers shoot at his taxi all along the route. He jokes about their poor aim, underlining how bizarrely accustomed he has grown to that reality.

In Kabul a family of sisters and their brother have sold everything to leave for Europe. We see them crowd around an iPad to watch news of a woman being stoned in the city. It’s a disturbing mix of modern technology showing an utterly medieval punishment.

It’s easy to predict that this ambitious and necessary film will win every documentary award going. What is uncertain is what will happen to all the refugees it allows us to get close to – and when or if, after the long, harrowing journey, they will reach their goal.

The second was when, in response to a warning that my mailbox was full, I set to clearing ancient emails and discovered that I took over as the Irish Times TV critic more than six years ago. That sparked a memory – are mailboxes the modern, less tasty madeleines? – of the conversation at the beginning, when I thanked my editor for such a plum job and told him that I would be happy to do it for three years.

That seemed seemed to me, at the time, a good stretch for a weekly column. As a deadline stickler I am amazed at how easily I overshot that self-imposed endline. That was also a cautionary reminder of how quickly years pass without me fully noticing.

There was a growing sense that although television drama is enjoying a golden age of storytelling brilliance – it is rare to come across a turkey – for every Exodus there are 20 observational docu-duds. For every Veep there are hours of laugh-free comedies, shouty talent competitions and chatshows long past their amuse-by days.

The balance between watching TV for enjoyment and watching it in order to write about it – a sure privilege – had shifted to spending too many dutiful hours watching programmes I would never otherwise bother with.

And so, after much more 250,000 words about what’s on the box, I’m losing the remote control – for once, intentionally – and getting off the sofa.