Easier than ‘Dementiaville’ is ‘The Syndicate’, a drama about a group of ordinary Joes who win the lottery 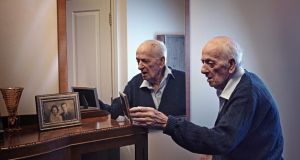 Dementiaville turns out to be, not exactly uplifting – who could spin that one? – but undeniably positive. We’re living longer, and with that medical miracle comes the medical mystery that is dementia.

You can guess what you’re going to get from Dementiaville (Channel 4, Thursday), so you steel yourself to watch, thinking that if it’s Thursday it’s Scandal night (Sky Living), much easier to watch that, to be mesmerised by Kerry Washington’s quivering mouth, her fabulous Olivia Pope clothes and the cartoonish plot than to watch the first in a three-part documentary on dementia.

But then Dementiaville turns out to be, not exactly uplifting – who could spin that one? – but undeniably positive. We’re living longer, and with that medical miracle comes the medical mystery that is dementia. The challenge is how to deal with it. This first film in the series visits Poppy Lodge, a care home in the British midlands with 30 residents in various stages of dementia, where the care workers – dedicated, tireless – are pioneering a controversial approach to the disease. “For many people with dementia, the past is more real than the present and so the approach here is to go there with them,” says matron Joanne.“It’s about validating that feeling, reinforcing their delusions.”

And so when 91-year-old Les spends his days looking for his father, calling out for him, it’s so sad. The staff affirm that, yes, his dad isn’t home – but it’s because he’s probably doing overtime. And Les is momentarily content. He worked in the Riley car factory when he was 15 and in his mind he’s back there – so the staff organise an outing in a Riley. He can’t recognise his own children, but he knows every detail of the vintage car.

It’s the same with the octogenarian former matron who spends hours giving medical advice and bandaging a caregiver’s hand (their patience is awe-inspiring) or the 1940s-themed evening where everyone knows the songs and the staff dress in retro glam. Dementiaville is filmed over several months. Some people in the home deteriorate; there’s a death; it’s all very raw and real, filmed with an obvious kindness and sympathy, and the positivity comes from the idea that there are caregivers such as Craig who, as he says, spends his days “trying to navigate the unpredictable world of dementia” for people, strangers, in his care.

“The staff play along with the residents’ realities,” says Joanne of Poppy Lodge’s policy of never contradicting patients or reminding them of their present reality because, “Whose truth is it and what’s to be gained by it?”

A much easier watch – the TV equivalent of a big fat beach read – is The Syndicate (BBC One, Wednesday). The six-part drama is the third version of scriptwriter’s Kay Mellor’s simple but clever idea: a syndicate of ordinary Joes wins the lottery. The first series saw a group of supermarket workers scoop the big prize. Then it was hospital workers. Now, because Downton Abbey’s influence has seeped everywhere, the syndicate are workers in a big house in Scarborough who win €14 million.

Below stairs they’re salt of the earth, work ’ard, know-their-place types; upstairs Lord and Lady Hazelwood (the reliably posh Anthony Andrews and Alice Krige) are snooty toffs with strangulated vowels, a pair straight from central casting. Rich Americans arrive for a visit – yes, it’s the sort of drama where “the Americans” arrive – all sunglasses and wowing about the portraits in the hall. They’re part of a devilish plot, cooked up by Lady Hazelwood (the lord’s second wife, so immediately suspect) and her scheming dim-Tim son, to flog the estate for a golf course.

Through heavy-handed, exposition-filled scenes we know the Hazelwoods are £6.5 million in debt and can’t afford to turn the heat on. So by the end of the first episode the staff have won the lottery and can buy and sell the bosses – but do they? Does all that cash wreck their poor-but-happy dispositions? That’s the plot. And the cast – particularly the below stairs lot, all familiar TV faces, cook Julie (Melanie Hill), cleaner Dawn (Elizabeth Berrington), housekeeper Sarah (Cara Theobold), groomsman Sean (Richard Rankin) have lines that people might actually speak – even Lenny Henry as the gardener isn’t as annoying as he usually is. See? Lovely, nothing to tax the brain.

Red Rock (Wednesday, Thursday) TV3’s twice weekly soap, set in a Dublin police station, wrapped up this week with a proper eye-popping shocker in the final scene (it’s coming back in the autumn) and it’s been entertaining, sharp, with strong acting and pacy good-looking direction; with scripts that balanced humour with grit, and believable characters played by some of our top actors.

The first episodes back in January introduced a Garda station full of likely characters. And so it has proved as several have emerged with good storylines, while the central storyline – underpinning the whole thing – of two warring families from different sides of the tracks led by fierce matriarchs (Cathy Belton and Denise McCormack) hasn’t flagged.

Red Rock has given some of our best actors screen time (and it’s been a weekly reminder of how little homegrown TV drama there is here – I know it’s expensive, but...) and so too has No Offence (Channel 4, Tuesday) which showcases a large amount of Irish talent. Paul Abbott’s (Shameless) crime drama started off sitting somewhere between a spoof and gritty police procedural – it was raucous and filthy but with the look of any amount of Manchester crime dramas. Now No Offence seems to have dropped the spoof part and settled down to try to be the real thing and it’s not as fierce and daring as episode one. And the serial killer main plot is getting lost in unconvincing almost dominant subplots – last week’s cash for kidneys story with smooth-talking Andrew Curtis (Emmett Scanlon) to this week’s boring subplot involving a child murderer whose post-release new identity is blown (with David Herlihy as his shady family member). Though Alexandra Roach, Joanna Scanlan and Elaine Cassidy as the three female detectives are terrifically well written, strong feisty characters that makes No Offence, which ends next week, still a must-see.

Ones to Watch: Men in labour; wild in Paris

Adapted from Joe Penhall’s sell-out 2012 Royal Court comedy, Birthday (Sky Arts, Tuesday) explores what might happen in the delivery room if men could get pregnant. Stephen Mangan is the man with the bump alongside Anna Maxwell Martin.

How To Be Bohemian With Victoria Coren Mitchell (BBC 4, Monday) is a romp through unconventional arty lives beginning in post-revolutionary Paris, where poverty-stricken, garret-dwelling artists and writers gained a reputation for loose living, colourful clothing and wild parties.