Television: Bigotry in homophobia hotspots, and philosophy in the back seats of taxis

Stephen Fry got personal with zealots, and a timely fly-on-the-dashboard documentary ticked a lot of boxes 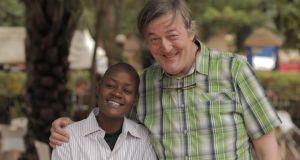 Out there, right now: Stephen Fry in Uganda with Stosh, who is gay, and who was ‘correctively’ raped at the age of 14

For Out There (BBC Two, Monday and Wednesday), Stephen Fry’s latest globetrotting documentary, the polymath, who is gay, set out to visit the world’s homophobia hot spots. Not Iran, which imposes the death penalty for homosexuality – the producers were advised it would be too dangerous – but Uganda, the US, Russia, Brazil and India. Homosexuality is still criminalised in 84 countries, of which almost half have a British colonial background. Fry started in his home city of London, at the civil-partnership ceremony of two men – he blubbed ostentatiously, which seemed a bit much, as he had met them only five minutes earlier – visited Elton John and David Furnish in their mansion, and ended the episode by meeting the actor Neil Patrick Harris at his Hollywood home.

That was all fabulous, air-kissy and lovely, in sharp contrast to other interviews, which turned ugly very quickly as he exposed dangerous levels of intolerance and ignorance. In Uganda, where the government is proposing a law that would put gay people to death, Fry took part in a radio debate with an influential anti-gay pastor who had quite a list of ills he said homosexuality would cause. “You’re obsessed with sodomy,” said an exasperated Fry.

Later he met a lesbian, Stosh, who at the age of 14 was a victim of “corrective rape”, which is widespread in Africa and left her both HIV-positive and pregnant. “Grotesque figures like the pastor stop being funny because it’s their rhetoric that ultimately causes this,” said Fry.

It was the same wherever he went, from Brazil to St Petersburg, encountering ranting illogical but, crucially, powerful homophobes who are convinced there is a “gay agenda” set on recruiting young people and destroying “our culture”.

Fry has made many documentaries, and his style is to turn up and have a collegiate urbane chat, but here he lost his cool many times – always a mistake with ignorant zealots, because it makes them feel as if they have won. At the end of a trying interview with a Ugandan government minister, he said, “You should try homosexuality: you’d like it,” which wasn’t big or clever. And his parting shot to a US therapist was, “Have you heard the term metrosexual? You could easily pass as a gay man.” The therapist, who has a busy “reparative practice” offering a psychobabble version of “pray away the gay”, looked stunned.

Clearly I have to up my game if I’m to match the customers in Taxi (RTÉ One, Monday), a fly-on-the-dashboard documentary. The passengers didn’t mumble their address, grumpily ask for the radio to be turned down or say something boring about the weather.

They talked in complete sentences that touched on the big issues of the day. So a Traveller commented: “In relation to education, resource teachers have been cut”; a retired business type said: “We need more indigenous industries”; and a young neurologist with impressive sideburns remarked:, “It’s not safe to be seen by a doctor who has been awake for 30 hours.”

All they were short of was a member of the ASTI complaining about how hard teachers work and defending their holidays.

As a pre-Budget programme, this felt very on-message. I expected something a little less contrived, and not to feel that a researcher was standing just off-camera with a clipboard: young guy talking about his friends having to emigrate, tick; a gaggle of women on a hen party, tick; ghastly Dublin couple harrumphing about social-welfare scroungers – “I’m paying for people, a lot of whom I truly believe are choosing not to work” – tick.

The taxi drivers were great: stoic with the right mix of indifference and interest, and uncharacteristically silent about the state of the nation. Sometimes they weren’t able to help themselves, though. “In Dublin?” said one driver, his voice raised to an incredulous squeak as his German passenger remarked how clean everything was.

Taxi was a polished piece of filming and editing, as it cut seamlessly between the cities and the conversations of a wide variety of people from Cork, Limerick and Dublin. That they were airing their views from a back-seat soapbox was a refreshing reminder of how rarely TV bothers to hear directly from Joe Public.

The comic genius of Julia Louis-Dreyfus, best known for playing Elaine in Seinfeld, and the talent of Armando Iannucci, known mostly for his epic, foul-mouthed creation Malcolm Tucker, in The Thick of It, got me though the first series of Veep (Sky Atlantic, Wednesday). The HBO series is The Thick of It meets The West Wing with hints of The Office, and the first series was the sort of comedy you nod at in an “Oh, that’s funny” rather than a laugh-out-loud way.

Set in Washington DC, it features Louis-Drefus as Selina Meyer, the power-hungry, sweary, nasty but sweet-looking US vice-president. It was chock-full of biting one-liners and running gags, and brimming with cynicism, but it felt superficial compared with The Thick of It; it lacked the white-hot anger that was at the heart of that series.

The new series of Veep opens during the midterm elections. Her party (Which party? It’s never said) has lost the House, but her successful campaigning – “It’s like happy Nuremberg,” says an aide after one rally; the one-liners are distributed evenly among the cast – has seen her carve out more power.

Crucially, she now has a foil, a key character device that was absent from the first series. He is the senior strategist Kent Davison (Gary Cole), “the Pol Pot of pie charts”, and he is as ruthless and self-obsessed as she is. He might give Veep the edge it has been missing.

It’s at the end of its second series, and perhaps you could be forgiven for assuming The Science Squad (RTÉ One, Friday) was a children’s programme – perhaps it’s the “squad” in the name, the title graphics or the time it’s on. However, this is a no-frills magazine programme about the work of Irish scientists. And it has three peppy informed presenters, in Aoibhinn Ní Shúilleabháin, Kathriona Devereux and Jonathan McCrea, so all in all it’s a good thing. This week’s final programme looked at the science behind running, at wind turbines and at Irish scientists working to help eradicate malaria: that’s plenty of strong material.