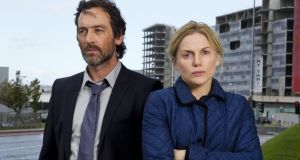 Something missing: David Murray and Eva Birthistle as Amber’s parents

A lot rested on young Amber’s shoulders. A huge sense of expectation for a start: RTÉ’s “big drama” output is sparse, so when a new series comes along, all eyes are on it and the station gave Amber (RTÉ One, Sunday-Wednesday) a justifiably large publicity push.

Dramas come and go on ITV, BBC and Channel 4 without klieg lights shone on their every minute. The mediocre ones, such as Amber, simply get lost and forgotten. On RTÉ, though, there’s just not enough output for that to happen. Amber was a crime series, and that’s the TV genre with any number of recent gripping, smart examples, from Broadchurch (now on TV3 on Wednesdays) to The Bridge (BBC Four, Saturdays), that continue to layer intriguing, clever elements on top of the standard police procedural.

Amber was the story of a missing daughter and the impact of her disappearance on her parents (Eva Birthistle and David Murray). And how were viewers – loyal for four consecutive nights, which was a big ask – rewarded at the end? A flashback to the day the teen went missing, showing her heading up a lonely country road followed by a white van. Really? It was White Van Man – the tabloid favourite in every missing-child story – wot did it. Or maybe not. Who knows? I don’t think the writers did. Apart from one convincing red herring, the creepy prisoner in episode two, there weren’t really any viable options. The repeated shots of the same man walking his dog was as good as it got when it came to a tantalising clue.

Episode one promised much, with a strong set-up of a middle-class mother and father in contemporary Dublin dealing with the tensions of a recent separation when their artistically gifted 14-year-old daughter (beautifully underplayed by the newcomer Lauryn Canny) goes missing.

The second episode played with time and perspective, with the story told mostly from the perspective of the mother’s friend, who was a journalist. (She looked for an advance from her editor – at which point, in the real world, every freelancer will have shrieked, advances being as mythical as the Yeti.)

In episodes three and four, despite the time shifts and sparse new details, the fragile sense of suspense dissipated and the improbabilities piled up, especially the sequence involving Charlie, a Chinese man who handled stolen phones. Amber’s dad owned a security firm, and there were shades of the film Taken, in which the daughter of Liam “I will find you” Neeson’s character is abducted and trafficked. Amber’s dad, concluding that she had been trafficked, went on a lengthy, ultimately dead-end detour into the porn industry. But Amber’s dad was rubbish at even basic security: how could an undocumented person get access to his office?

Amber looked good, with strong production values, and there were interesting time shifts and perspective choices, but, crucially, they delivered none of the clever plot twists such devices afford and viewers reasonably expect. None of the characters was fleshed out enough, so it was hard to care, and the acting was uneven, with some actors pitching as though they were on stage; others, notably a naturalistic Birthistle, were more TV-friendly. The weak plot was neither able to go forward with the suspense and intelligence a crime drama needs nor able to come to a stop with a satisfying conclusion.

The real drama this week happened in the flat over the cafe in Coronation Street (UTV, TV3), where Hayley Cropper (Julie Hesmondhalgh) did what, weeks ago, she told her devastated husband, Roy (David Neilson), she was going to do. When the time came that she was no longer able to live with the life-limiting effects of her terminal cancer, she would kill herself. It was a masterclass in writing, acting and direction with grief-racked, tender moments that never tipped over into soap sentimentality.

While the street went about its normal business – with Gloria sniping, Tyrone hunting for a missing soft toy, and Rita and Norris bickering – time ticked down to what was the inevitable end for Hayley, though not for Roy. “I’m ready,” she said. “I’m not,” he replied. The eccentric couple were true to themselves until the end; gentle nagging alternated with sweet, anguish-filled words. When Roy was out at the shops she ironed his shirt, in agonising pain, one last time. “I won’t have you showing me up at the funeral,” she said, “and you’ll take a brush to your good shoes.” Unable to accept that Monday was indeed the day, and reminding her that she had a choice, he pleaded, “We could start today again. Do it better. Do today better tomorrow.”

In Coronation Street, characters who want out usually disappear or meet an improbably explosive end. If they want to leave the door open they go somewhere unlikely, such as when Bet Lynch flounced off to “Tener-ee-fee”. Hayley’s exit will go down as the most memorable in the long history of Coronation Street, not only because it raised the difficult subject of a terminally ill person’s right to die, which is a huge nettle for any drama to grasp, and which it did with such nuanced sensitivity, but also because it was so extraordinarily well acted and so devastatingly sad.

So from the sublime to the rag-rolling: The Great Interior Design Challenge (BBC Two, weekdays from Monday). I don’t know how the makers resisted slipping the word “British” into the title, because this boring-as-beige series follows the much-copied Great British Bake Off format: two judges telling each other things they already know; a presenter filling time with historical yarns; and contestants who think this might be their big break. Each episode features three amateur interior designers doing up a room in neighbouring houses, and at the end of the episode one is judged the winner.

Some years ago Neville Knott presented Showhouse on RTÉ. Its format was virtually identical, but it had far more panache and humour. In the first episode of the BBC series a posh young fogey, in a navy blazer with gold buttons, and a woman with alarming red hair and a penchant for trompe l’oeil lost out to the inevitable lover of twee mix’n’match vintage.

Give it a miss unless you’re in the market for daftness such as one judge’s advice never to have yellow in your bedroom, “because it makes you look sallow”.