This cliched French political drama is close to an undercooked soufflé 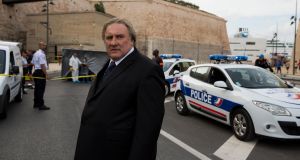 Gerard Depardieu: poor lighting and bad make-up leave him looking like a crumpled Yorkshire pudding that’s been put into a suit

When writing about Netflix’s new French-made political drama Marseille, I wanted to avoid the kind of lazy caricatures of French life or society that are ubiquitous to such discussions.

Then, 15 minutes into the first episode, Gerard Depardieu’s character shrugs while comparing the strain of a bureaucrat’s life to that of juggling a wife and a mistress. It quickly becomes clear that I can’t avoid those dog-eared tropes about the French because, zut alors, Marseille makes no such effort itself.

Everyone’s favourite spherical tax exile plays Robert Taro, the embattled mayor of Marseille, whose reign is threatened by his erstwhile lieutenant Lucas, played with scenery-devouring abandon by Benoit Magimel (a Eurosaver menu Mads Mikkelsen). Marseille also delves into Taro’s family relationships, life in the city’s projects, regional political intrigue, and the criminal underbelly connecting the above. Unfortunately, Marseille does not execute this rich melange very well. At best, it has the dramatic solidity of a scandalously undercooked soufflé; at worst, it’s basically a sexed-up parody of House of Cards.

A fondness for sex is among the more well-worn clichés about the French, and Marseille’s sex stats are pretty high – although the majority of its sex scenes are completely irrelevant to the narrative drive. The references to sex in the script are also cringe-worthy – such as the surreal aside in which one gangster describes another “getting a boner” each time he does up his tie, or Taro telling his daughter how delighted he is by her roommate’s promiscuity. “The more she gets laid, the more we see you,” he declares, causing adoring laughter from said daughter.

Much of Marseille’s political dialogue is similarly heavy-handed. In one scene, a politician tells her colleague “I admire men with balls” before immediately adding, “in other words, principles”. Elsewhere, a cagey newspaper editor tells Lucas “politicians and journalists make strange bedfellows. It’s really a business relationship. We just want to sell papers and you just want to buy votes.” The 30-second short films shown between songs during Eurovision do a better job at political commentary.

As for the gangland subplot, we’re treated to a literal rogue’s gallery of criminal clichés: expense-fiddling bureaucrats, Middle Eastern archetypes from central casting; and that breed of chic, be-suited Euro-gangster often seen in Bond movies – the type that sneer from a distance and mutter into their cufflinks while Bond introduces himself to a femme fatale named Thrusty Leglongs or Sexica Joyhinge.

Stagey and flat
The show’s action scenes are largely stagey and flat, with stilted knife fights and slow-motion explosions straight out of an All Saints video. There’s one political assassination that’s as inert and lifeless as those anti-piracy warnings, with balaclava-clad men breaking down grannies for scrap, implying you’d be the same if you torrent Cheaper By The Dozen 2.

Marseille is a hot mess, but Depardieu remains watchable throughout. His hangdog charm brings a depth to the show that neither its plotting nor script deserve, even if a combination of age, poor lighting and bad make-up leave him looking like a crumpled Yorkshire pudding that’s been put into a suit. He spends most of his scenes in a flop sweat, and it’s often unclear if said perspiration is his or the character’s.

Lightly damp and ponderous, he plods from scene to scene with the queasy seriousness of a man who’s found a suitcase full of shellfish in a bus station and intends to keep working his way through it, no matter what his doctor says.

To borrow some metaphors befitting the show, watching Marseille is like having an extravagant and labyrinthine affair, or wearing onions as jewellery, or smoking inside all the time – an unwise pursuit not without its pleasurable diversions but, in the end, most likely more trouble than it’s worth.