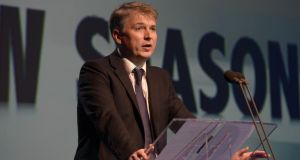 Steve Carson who is leaving RTÉ Television to take up a new role with the BBC. Photograph: Brenda Fitzsimons/The Irish Times

The 45-year-old Belfast native will join BBC NI as head of productions.

He joined RTÉ in 2009 as director of programmes and also became responsible for current affairs after the Mission to Prey programme involving Fr Kevin Reynolds.

He was perceived to have lost out when channel controllers were appointed to both RTÉ One (George Dixon) and RTÉ Two (Bill Malone) in March.

Earlier this year he took up a new role of chief editorial adviser and director of factual group at RTÉ Television. He also headed up regulation.

Mr Carson started at the BBC in London before moving to Ireland in 1997 where he set up Mint Productions based in Dublin which made programmes including a documentary series on Charles Haughey and Bertie Ahern.

He married RTÉ presenter Miriam O’Callaghan in 2000 and the couple have four sons. He also has four step-daughters. Ms O’Callaghan is to remain at RTÉ.

Mr Carson said the BBC had a “vital public service that’s at the heart of life in Northern Ireland. I’m looking forward to working with all the production teams to help make ambitious programmes that will appeal to local and network audiences. I look forward to this exciting new role.”

BBC Northern Ireland director Peter Johnston added: “I am delighted that someone of Steve’s calibre and experience is joining us and at such an important time. Our local programmes are making a significant impact with audiences here; we are increasing our content supply to the BBC’s networks and harnessing the benefits and opportunities of digital technology.

“I look forward to Steve’s arrival to the senior team at BBC Northern Ireland and the experience and creativity he will bring.”

Mr Carson is expected to take up the role before the end of the year.