‘Snakes vs Iguana’ named TV moment of the year at Baftas 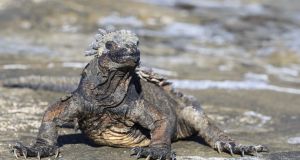 Iguana: the animial features in the Bafta Must See Moment on TV in 2016, which went to footage of an iguana being chased by snakes from David Attenborough’s Planet Earth II series 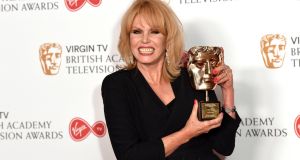 Joanna Lumley, winner of the fellowship Award, at the Bafta Television awards at The Royal Festival Hall on May 14th 2017 in London. Photograph: Jeff Spicer/Getty Images

The Bafta for TV’s “must see moment” of 2016 went to breathtaking footage of an iguana being chased by snakes. The footage, from David Attenborough’s Planet Earth II series, beat Ed Balls’ performance of Gangnam Style on Strictly Come Dancing.

Attenborough’s Planet Earth II also won the best specialist factual award, in a night of sweeping success for the BBC at the Bafta (British Academy of Film and Television Arts) ceremony devoted to for television awards.

There was disappointment for Netflix as its opulent drama The Crown walked away with nothing. It is the second time Sally Wainwright’s police procedural series won the Bafta for best drama, while Sarah Lancashire won best leading actress for her portrayal of Sergeant Catherine Cawood, with the first series picking up the award in 2015.

Picking up her award, Lancashire paid tribute to the “phenomenally talented Sally Wainwright” but also thanked fellow nominee Claire Foy, star of The Crown, for “the best ten hours I’ve ever spent under a duvet”.

The £100m Netflix drama about a young Elizabeth II, written by Peter Morgan for streaming service Netflix, led the nominations but lost out in all major categories.

Damilola, Our Loved Boy, the BBC drama telling the story of the 10-year-old killed in London in 2000 and his family’s fight for justice, was also one of the the biggest winners of the night. It was named best single drama, and Wunmi Mosaku, who played Damilola’s mother Gloria, won the award for best supporting actress.

In one of the most moving speeches of the night, producer Colin Barr was joined on stage by Damilola’s father Richard and older brother Tunde, who worked closely with those making the drama.

“There are a couple of people who are up here with us for whom this was much more than just a film, this was their lives,” said Barr.

The award for leading actor went to Adeel Akhtar for his role in BBC three drama, Murdered By My Father, an account of a true-life honour killing of an Asian girl. Akhtar said he wanted to “dedicate this to my wife and my nine-month old baby who remind me to be kind and compassionate every day”.

Best female performance in a comedy went to Phoebe Waller-Bridge for Fleabag, her filthily funny series about a sex-obsessed and fragile protagonist struggling in the wake of her best friend’s death.

“I promised I wouldn’t say anything rude but I have been wet-dreaming about getting a Bafta my whole life,” said Waller-Bridge, who beat co-star Olivia Colman to the award. “Most of all I want to thank my mother who said: ‘Darling you can be anything you want to be as long as you’re outrageous.’”

Despite the Night Manager missing out on nominations in most major categories, Tom Hollander won best supporting actor, beating both Jared Harris and John Lithgow for their roles in The Crown.

Best mini-series went to National Treasure, landing writer Jack Thorne his fifth Bafta for his drama based around historical sex abuse cases such as Jimmy Savile and Rolf Harris.

“There seem to have been a lot of people tonight talking about untold stories and this is for those who were brave enough to come forward and those whose scars were too deep to do so,” said Thorne.

The provocative BBC Two reality series Muslims Like Us, which brought together 10 Muslims in one house, won best reality and constructed factual.

Steve Coogan won best male performance in a comedy for Alan Partridge’s Scissored Isle, while best international series went to The People Vs OJ Simpson. Picking up the award, Cuba Gooding Jr said: “I’m a boy from the hood and now I’m on this stage picking up gold.”

Hassan Aad, whose journey from Damascus to England was a focal part of the series, collected the award. He said: “Since we’ve made this documentary over 10,000 people have died trying to find refuge in Europe. They are not just numbers. It goes to them and their untold stories.”

Politics was noticeably absent from this year’s ceremony, with nominees warned prior to broadcast that “we are in a general election period so be aware if you mention anything in that territory, it may be cut” to keep in line with rules about the BBC’s impartiality.

It followed pre-emptive attempts by Bafta to curb possibly controversial speeches in the run-up to the upcoming election. An email recently sent to all nominees, written by Pruthvi Pandit, Bafta’s head of television, asked them to offer “some insight into the winning programme by including a short anecdote or an interesting detail about the production” in their awards speeches.

Nominees also were told that, as is the case every year, they should keep their speeches to less than one minute. If nominees spoke too long, a clock appeared on the autocue as “gentle reminder to wrap up”.

Absolutely Fabulous star Joanna Lumley, 71, was given this year’s prestigious Bafta fellowship, which she called the “grandest and most unexpected prize I have ever had the joy of receiving”.

The Bafta for single documentary went to BBC Two documentary about the Hillsborough disaster, which was commissioned five years ago.

The television Baftas were presented for the first time by Sue Perkins, replacing the host of nine-years, Graham Norton, who was still in Kiev after hosting Saturday night’s Eurovision Song Contest.

“I know what you’re thinking, not another awards show presented by a woman,” said Perkins sarcastically. “When will it end? I find it a little like Halley’s comet but a little less frequent.”

Making reference to having left the Great British Bake Off in the hands of new presenters Sandi Toksvig and Noel Fielding she wished the “best of luck to the new Bake-Off team. They’re going to need it. They’re about to discover what Mel and I left in the groundsheet.”

Who took the spoils? List of winners at Bafta TV awards

Features: Who Do You Think You Are?