Hugh Linehan: The New Year’s Eve rape joke was less satire than a failure of imagination 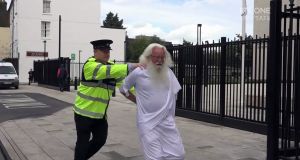 One of the more unpleasant aspects of contemporary life is the hyper-tribalisation of every disagreement into a binary choice . On the progressive side of the aisle, they even have a word for it: “allyship”. If you agree with us on subjects A, B and C, then you’d better sign up wholeheartedly for cause D. If you don’t, then you’re either a traitor or a dupe. Deviation from this rule will not be tolerated.

So when it comes to the recent controversy over a woefully unfunny Waterford Whispers News sketch broadcast by RTÉ on New Year’s Eve, criticism of the decision to broadcast the skit inevitably came almost exclusively from religious leaders and conservative commentators. And the (much quieter) defence inevitably derived from the secular left. In this instance, the conservatives are (mostly) right and the liberals are (mostly) wrong. So should I send my membership card back or just burn it at home?

If you missed it, the sketch, which took the form of a fake bulletin presented by former newsreader Aengus Mac Grianna, featured God being arrested. “In another shocking revelation this year,” Mac Grianna told viewers, “God became the latest figure to be implicated in ongoing sexual harassment scandals. The five-billion-year-old stood accused of forcing himself on a young middle-eastern migrant and allegedly impregnating her against her will. He was sentenced to two years in prison with the last 24 months suspended.”

Watched live, as part of a mainstream flagship entertainment programme in the context of a national lockdown which would have boosted audience numbers well above the norm, the item was crude, jarring and clearly offensive to many viewers. Buried somewhere within the bad writing was a hamfisted attempt to make a point about the Irish court system’s treatment of sexual assault – by making a rape joke about Christian belief. And a Happy New Year to you too.

In a hanging-out-to-dry process which will be familiar to freelance writers and entertainers everywhere, it was left to poor Mac Grianna to make the most heartfelt apology, even though he’s unlikely to have had script approval. “Truly I am deeply sorry for the offence, distress and hurt caused,” he wrote on Twitter. “It was wrong for me. It was wrong of me.”

Atheist Ireland, who’ve never seen a bandwagon they didn’t fancy jumping on, managed to miss the point in a particularly 21st century sort of a way

So far, so familiar. A more modern twist to the tale centred on the fact that the offending item was still available on the RTÉ Player, giving rise to inevitable demands for its removal (although, given the shortcomings of the player, that was probably the best place to keep it safely hidden).

But when Atheist Ireland, who’ve never seen a bandwagon they didn’t fancy jumping on, correctly pointed out that nobody has the right not to be offended, they also managed to miss the point in a particularly 21st century sort of a way by conflating censorship and editorial decision-making.

Yes, of course RTÉ has the right to broadcast whatever it wants within the limits of the law of the land. It is also, like other media organisations, constrained by its own ethical and editorial guidelines. And it has an internal decision-making team of producers, editors and managers whose job it is to make sure those guidelines are observed, that quality thresholds are met and whatever material is being produced is appropriate for the timeslot and context in which it is being broadcast.

All of this complex machinery is designed, in theory at least, to ensure that media companies may aspire to the publishing equivalent of Tom Waits’s definition of a gentleman as someone who can play the accordion but doesn’t. Good editorial judgment is often about recognising when to put the bloody accordion down before it’s too late.

That process clearly failed here, a fact RTÉ acknowledged on Thursday of this week, when it published the findings of its own Editorial Board that the sketch had failed to comply with its own standards as well as with a number of legislative and regulatory requirements. The processes which led to the piece being broadcast will be reviewed, it has been removed from the Player and an apology will be published. To be fair, it's a clear and comprehensive acknowledgment of a serious lapse in standards. But it’s also legitimate for critics to ask whether such a failure of judgment reflects a lack of respect for that part of the population – in this case, presumably, practising Christians – most likely to be offended.

There is, of course, a certain wearisome pattern to these things. Everyone has their part to play – the TDs railing against godless media types, the calls for unspecified but serious penalties against RTÉ, the outraged letters to the editor – so that it feels properly like the relevant Reeling in the Years clip from the 1970. But it’s four decades now since Ireland banned The Life of Brian, the bishop’s crozier has long lost its power and, to this atheist’s eye, the decision to broadcast the sketch looks less like a fearless commitment to satire and more like a gross failure of imagination and empathy.

Note: the print version of this article went to press before RTÉ published the findings of its Editorial Board and announced the actions it would take as a result of those findings. This digital version has been amended to reflect those developments.