Ricky Gervais on Netflix's plans: 'The return of the auteur'

A replica set of Freddy’s barbecue joint; star turns from Gervais, Kevin Spacey and Kate Mulgrew; and talks about algorithms and the ratings black-out – here's what happened at Netflix's annual show of strength in Paris 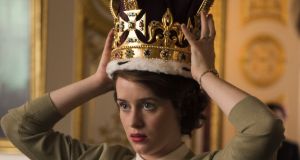 Claire Foy in The Crown 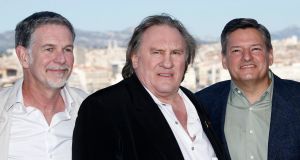 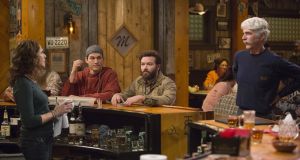 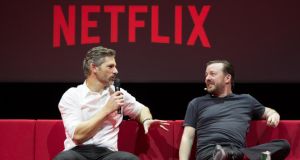 At Netflix’s recent state-of-the- nation shindig in Paris, stray celebrities wander through crowds of journalists and vloggers. Outside there’s a big, rubber, three-dimensional Netflix sign against which people take selfies. Inside is a series of white plywood sheds in which are near-perfect replicas of sets from Netflix productions, such as Unbreakable Kimmy Schmidt and Ricky Gervais’s Special Correspondents.

The canteen is a recreation of the prison canteen in Orange Is the New Black, and dinner is served on trays by orange-jumpsuited women (presumably not real convicts), overseen by one male, baton-wielding prison guard, who is a little too invested in the role (given show creator Jenji Kohan’s genuine interest in prison reform, I’m not sure she would approve).

Over the course of the day there is a series of talks from Netflix hobnobs such as founder and chief executive Reed Hastings, chief content officer Ted Sarandos and product innovation vice-president Todd Yellin, as well as panel interviews with the big stars. These include Kevin Spacey from House of Cards, Kate Mulgrew from Orange Is the New Black and Charlie Cox from Daredevil, as well as newcomers with upcoming productions such as The Crown, The Ranch, Marseille and Special Correspondents.

Hastings gives us a potted history of 20th-century mass entertainment. His story winds from radio through VHS to on-demand internet television, a format more or less invented and pioneered by Netflix. He has a way with a soundbite. “The book,” he tells us, “is the original binge view.”

Hastings and co are keen to stress how far the business has come from being a DVD-mailing service to a digital distributor of other people’s content, to a producer and distributor of its own stable of independent programmes and films to 75 million subscribers worldwide. Ringing the stage are publicity shots from 35 of these productions (three years ago they had no original programming).

Hastings sees their innovations in on- demand television as life-changing for their customers. Yes, Netflix has freed us from the shackles of megalomaniacal programmers and bound us instead to its benevolent all-knowing algorithm (actually about 15 algorithms, vice-president of product innovation Carlos Uribe later tells us) and over the course of the day many huge stars take to the stage to pay tribute.

Kevin Spacey, wearing a light-coloured suit and tie, comes on to praise Netflix’s foresight in launching House of Cards, its first home-produced show, in February 2014. He mentions the departure of showrunner Beau Willimon (“I’ll miss him”) and is vague about future plot developments (“I can’t be spoiler-in-chief”).

He talks about his theatre work, impersonates his friend Bill Clinton, and comments on the US presidential race. Sometimes when wondering if they’ve gone too far with a plot on the show, he turns on the television and realises “we haven’t gone far enough”.

Between panels there are trailers for upcoming shows: Baz Luhrmann’s The Get Down, Peter Morgan’s The Crown and Ricky Gervais’s Special Correspondents.

A panel featuring “returning originals” includes Orange Is the New Black’s Kate Mulgrew and Lea De Laria, Charlie Cox from Marvel’s Daredevil, Tituss Burgess from Unbreakable Kimmy Schmidt and Lorenzo Richelmy and Michelle Yeoh from Marco Polo. Mulgrew and De Laria are the most entertaining. Mulgrew hints darkly at rivalries on set. De Laria says that their programme has the best writers in Hollywood “and I’ll mud-wrestle anyone who says they’re not”.

Burgess and Mulgrew laud the commitment to diversity on Netflix. “No one is made fun of,” says Mulgrew. “It’s not that we’re exalted but no one is diminished.”

Later there are discussions with Special Correspondent’s creator Ricky Gervais and his costar Eric Bana, as well as the creators and actors – Claire Foy, Matt Smith and John Lithgow – from the upcoming royal drama The Crown. Ashton Kutcher, here to discuss Netflix’s first multi-camera sitcom, The Ranch, begins by unintentionally giving the finger to everyone. “I was flipping off the head of the network,” he explains. Everyone is perfectly pleasant, albeit wearing the fixed grins actors wear while being held hostage by marketing people.

The more interesting stuff comes later in a series of workshops about how Netflix’s algorithm, tagging and personalisation systems actually work, and in a group interview with Hastings and Sarandos.

The workshops outline how Netflix’s model matches viewers’ preferences up with content using its own data rather than using focus-grouped opinions and professional presumptions (“What people say and what people do are two different things,” says Todd Yellin), and how this leads to the collation of strange computer-generated micro-genres that have to be named by film-buff humans or “taggers”. We also get a workshop in “tagging” (correctly labelling shows with key words) delivered in a strange, graphic-novel-strewn recreation of a hipster’s loft.

Although Netflix’s distribution business model can and will be easily copied (Sarandos once said that its goal was to “become HBO faster than HBO can become us”), its top brass argue that the sophistication of its system cannot be so easily emulated.

Interestingly, the company releases no performance data about its programmes. Beyond its occasional proclamations of success, there are no official viewing figures for any Netflix properties.

“[It creates] mystery and excitement,” says Hastings when I ask him why. “It works much better for us quite frankly because it becomes an object of fascination in the industry. And it also protects the creators, where if we have a slow start on a show that it’s not labelled as a failure, because sometime a slow start can develop into an amazing show.”

Creators, he says, “don’t really want to know [the ratings]. There’s such anxiety around that overnight rating number [on broadcast television] because they knew that was life or death for that show, and they used to live and die by that number and stay up nights waiting for it to get published. [With Netflix] you can tell if something is succeeding because we renew it for another season.”

Chelsea Handler’s upcoming talk show, if successful, says Hastings, might signpost the way to further talk shows. The Ranch and Fuller House are the company’s first multicamera sitcoms, and are not tied to the restrictions of network television counterparts (there’s swearing on The Ranch). The only formats Netflix is unlikely to look at, says Sarandos, are live sports and live news.

Its decision to upload most of its shows in one series-length chunk is also beginning to affect stylistic structure. Episodes of its newer programmes often feel less episodic than those on conventional television stations. Charlie Cox notes that with Daredevil episodes, “you don’t have those gimmicky cliff-hangers”.

Ricky Gervais tells me that he thinks the rise of Netflix also represents the “return of the auteur”. Choosing Netflix over a theatrical release for his film Special Correspondents meant he didn’t have to worry about either first-night jitters or studio interference. “The big difference [is that] there’s no pressure to pander to an unknown audience,” he says. He laments the rise of focus-grouped cinema and thinks that on-demand TV might be the automatic outlet for indie cinema in future. “[With Netflix] you don’t have to worry about demographic; it’s a smart, grown- up [film of the kind] they used to make before those things weren’t commercially viable.”

Someone asks if Hastings is worried they’re contributing to people watching too much television. “I joke with [Google cofounder] Larry Page that he wants to make the world more productive and I want to make it happier,” he says. “That tension will always be there.”