Gripping events and compelling characters define the Easter Rising. So where are they? 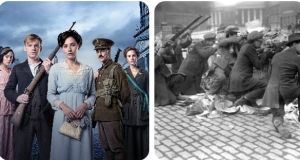 As we learn more about the events of Easter 1916 we know its history is filled with real drama, extraordinary events and fascinating characters

The events in the immediate wake of 1916 give Rebellion writer Colin Teevan a dramatic ending to the five-part RTÉ series, which ended last night.

It’s May 12th and the trials of the rebels continue; the execution of an injured James Connolly is unseen – a wise decision by director Aku Louhimies – but still shocking .

The RTÉ drama’s leading action man Jimmy (Brian Gleeson) is saved from the firing squad along with Éamon de Valera. Jimmy, who has spent much of the series haring through Dublin with Frances (Ruth Bradley), pals up with Michael Collins and has a go at de Valera. We are told by several characters that the mood in Dublin is changing – support for the rebels is rising. But there’s little sense of it.

One of the most unsatisfactory aspects of Rebellion is the wordy pronouncements used to tell the story, that puts stilted dialogue in nearly all of the characters’ mouths at some point. We’ve been told, too, that Dublin is destroyed but there’s little sense of that either. And for an armed and bloody insurrection, this Rising is remarkably free of tension.

But what of “the three little maids” introduced in the first episode? It seemed then they might be interesting, rebellious types; that Rebellion would help to rebalance the airbrushing of women out of the Rising story.

It hasn’t worked out that way. Civil Servant May (Sarah Green) is given a hackneyed period-drama plot – lowly girl pregnant by her toff boss – and she spends much of the series in unlikely scenes in a big house in suburbia with his wife Vanessa.

In episode two, which was by far the weakest, middle-class medical student Elizabeth (Charlie Murphy) jilts her soldier fiance and joins the rebels – and Jim, her crush. She remains in her white wedding dress and blue coat throughout like a dress-up Virgin Mary.

Deranged disciple of Patrick Pearse, Frances (Ruth Bradley), has been blooded by the Rising – she makes a speech about not living by men’s rules any more, dresses as a man, kisses May on the lips and kills the only detective in the Dublin metropolitan police.

Several female characters in the final episode make rallying feminist speeches – Elizabeth at her trial, the tenement mammy, even lawyer George’s girlfriend Ingrid – one of the many extraneous, plot thinning two-dimensional characters, like Liz’s cad of a brother, Harry. But it’s too late, Rebellion lost its feminist badge in episode four: at a key moment, the rebels surrender at Moore Street, it replaced nurse Elizabeth O’Farrell, who actually carried the white flag, with a man.

Rebellion’s timing is – ironically – unfortunate. Made 20 years ago it would have been a grand period drama with good production values and strong acting. Now, though, as we learn more about the events of Easter 1916 – largely through the centenary coverage in print and on television – we know its history is filled with real drama, extraordinary events and fascinating characters (some of them women).

This dramatic device of creating fictitious ones now looks like a wasted opportunity.