Radio: There’s nothing like a well-aimed squirt of verbal paraffin 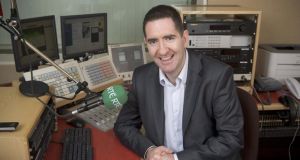 Already an overcrowded bear pit of gratuitous shock jocks and unhinged guests, the world of late-night talk radio has a new arrival to stir things up. Sticking to a familiar formula, the latest pretender to the nocturnal crown asks one provocative question after another, goading his contributors into a lather and thence on to increasingly incoherent squabbling. Much mirth, if not necessarily enlightenment, thus ensues for listeners to The Late Debate (RTÉ Radio 1, Tuesday-Thursday).

He may have taken over as host of the long-running political-discussion show only last month, but Cormac Ó hEadhra performs his new role with confidence as well as bringing a new chutzpah to the gig. As Tuesday evening’s Budget Day programme underlines, the deceptively amiable Ó hEadhra adopts a gladatorial – and occasionally emotive – attitude that any night-time phone-show host would be proud of.

Airing after Ireland’s dramatic 1-1 draw with Germany, the show starts in high spirits, with the Labour Minister of State Aodhán Ó Ríordáin declaring that he has “no interest in being here whatsover”.

“We have no interest in having you either,” Ó hEadhra shoots back. “We were expecting Michael Noonan, but what can you do?”

If the needling has a jocular nature, things get testier later. When Ó Ríordáin claims the Government is “ending the pain”, Ó hEadhra cuts across him, saying the Budget ignores rent supplements for the homeless. “There’s no point in me being here,” complains Ó Ríordáin. “I’ve been asked a question and not been allowed to answer.” Ó hEadhra responds that, despite the Minister’s talk of ending pain, “there was a woman crying on the Six One news.” It’s hardly a policy-based rejoinder, but it speaks of the presenter’s flair for emotional impact.

In fairness, he is balanced in his scorn. When he asks Peadar Tóibín how much health spending needs to increase, the Sinn Féin TD replies that “the figures within should have the hole that’s there filled”. “What does that mean?” snorts Ó hEadhra, saying what we’re all thinking.

All in all, it’s a more overtly confrontational approach than that of Audrey Carville, The Late Debate’s previous anchor. Ó hEadhra, who won an award for hosting Raidió na Gaeltachta’s drive-time news magazine, Cormac ag a Cúig, has a current-affairs pedigree that means he has a firm grasp of issues. But, equally, when the fires of argument show signs of dying down, he directs a well-aimed squirt of verbal paraffin on the embers.

Assailed by texts complaining about the property tax, Ó Ríordáin defends the measure as a necessary broadening of the State’s narrow revenue base: “We have to grow up a little bit.” When Ó hEadhra comments that people will be upset at a Labour Minister telling them to grow up, a row erupts.

The economist Jim Power, another guest, seeks to set the record straight: “He said we as a nation need to grow up.” Which isn’t quite right. “No, he said people need to grow up,” comes the response, again slightly inaccurate. “Woah, let’s be very careful how you quote me here,” says an audibly aggrieved Ó Ríordáin. “I said collectively we need a more mature discussion about taxation and the way our economy is managed.” Which, whatever else, is definitely not what he said. Like all the best late-night radio, the arguments get progressively more garbled as Ó hEadhra rachets up the heat. But when it’s this much fun it’s churlish to quibble.

Given that people rarely phone Joe Duffy to voice approval for the job of government, the unfavourable Budget verdict from callers to Liveline (RTE Radio 1, weekdays) is hardly surprising, but the mood coming over the line is so unsettlingly raw that Duffy tries to tamp down the air of desperation.

One woman, Anne, speaks of her anger at losing her business, having to sell her home and failing to find a decent job despite her wide work experience. The more she talks the more frayed she sounds. “I’m on the verge of a nervous breakdown,” she says. “We don’t want that to happen,” replies Duffy. But his reassuring tone is to no avail. Anne reiterates, in an ever more distressed voice, that she is “burnt out”, wondering why people in good jobs don’t work four-day weeks to make room for others.

So concerned is Duffy for his palpably strained guest that he even glides over her attempt to contrast her predicament with that of people “coming in” and supposedly being handed €750. Tellingly, however, he gently ends the call at that potentially tricky juncture.

Another caller, Verona, makes efforts to “sound less fraught” as she recounts how her haulage business is being hobbled by charges. But again things soon take an uncomfortable turn, with Verona stating her intention to go on hunger strike in protest at Government inaction. “I’m at the end of my tether,” she says, “but I don’t know where else I can go, except maybe the grave at the end of a hunger strike.”

Duffy sounds genuinely alarmed, pleading with his caller not to proceed with her actions. The presenter may regularly tap into his audience’s disgruntled streak, but he knows a really serious personal crisis when he hears it. Overall, it’s an unnerving snapshot of contemporary lives and a loaded rebuff to those who talk of “ending the pain”. When things are this bad, who needs to create controversy?

Moment of the Week: harsh sentence

On Wednesday The John Murray Show (RTE Radio 1, weekdays) reports that guitars belonging to the late Pogue Phil Chevron have been given to inmates at Mountjoy Prison, as part of a rehabilitation initiative by the English singer Billy Bragg. Murray talks to several prisoners, who speak of the positive effect of music on their plight. It’s handled with great sensitivity, right until Murray bids farewell in typically cheery fashion. “Good luck with the music behind bars,” he says. Talk about rubbing it in.