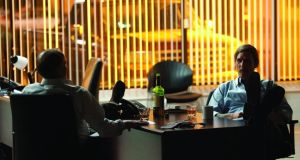 True Detective (Sky Atlantic, Saturday) is the story of two policemen with the same head (granite face, sensible side-parting) who in flash-forwards are estranged and have different heads (cropped and balding haircut versus flowing pony-tail). Why are their heads different in the future?

This is the central mystery of True Detective , because the murder, paedophile-ring maguffin is clearly just an excuse to have Rust Cohle (Matthew McConaughey) uttering existential nonsense (McConasense?) while Martin Hart (Woody Harrelson) looks confused.

So the show could really have been called Diff’rent Heads (“Whatdjoo talkin’ about McConaughey?”) or possibly, given how slowly paced the final episode is, Last of the Summer Ritual Murderers . In the finale, as the now older, variantly-coiffured duo mosey unhurriedly from place to place, Cohle says things like: “We’re sentient meat. However illusory our identities are, we craft those identities by making value judgments and everybody judges all the time. Have you a problem with that?”

“Sorry you big windbag, I’ve been wearing earplugs since episode two,” says Hart. No he doesn’t, he actually says, “What’s ‘scented meat’?” which is pretty funny now that I type it up. (Business idea: take the sayings of Rust Cohle, couple them with the spooky wicker trophies made by the killer and create a motivational calendar).

But where was this going? (I’ll carefully put a spoiler alert here.) In The Wire the enemy was, all along, a complex, dehumanising bureaucracy. In The Sopranos , we always knew the foe was in Tony’s own heart. In True Detective the baddie is, rather disappointingly, a solitary, scarred, pagan hillbilly who enjoys handicrafts and was introduced as a diablo-ex-machina at the last moment. It’s as simple as that. The other baddie, in the last episode, is bad mobile phone coverage. And the hero? The hero is an impressive six-minute tracking shot that came at the end of episode four and which every reviewer has to mention or be fired.

After eight episodes hinting at something much more labyrinthine, True Detective ’s murder mystery has a very mundane explanation. So the finale hinges on providing learning moments for our two main, arguably only , characters (the rest are ciphers).

What do they learn? Hart learns that he needs a new mobile phone service provider. And Cohle learns that, despite the paedophile killers and police cover-ups and the death of his daughter and hallucinations and lacerating torso wounds, it’s actually a wonderful life. This change of heart is a bit implausible. Maybe someone lent him a copy of Alan Moore’s life-affirming Top Ten comic from which the producers have borrowed the unusually hopeful dialogue with which the programme ends (“Once there was only dark. If you ask me, the light is winning”).

In True Detective , many seemingly meaningful plot points turn out to be inconsequential; Mad Men (Sky Atlantic, Wednesday) by contrast, takes inconsequential details – a camera lingering for a bit too long on an empty doorway, for example – and pumps them full of meaning. Then again, Mad Men never promised coherent story-arcs and clockwork clues, but characterful vignettes and vague, impressionistic moods.

The biggest problem for Mad Men is that Don Draper (Jon Hamm) didn’t really change. By the third series his hidden depths began looking like shallows. While other characters allowed themselves to be moved, for better or worse, by the passage of time, Don stayed an unhappy, philandering, workaholic drunk and his convoluted backstory began feeling like narrative dead weight. (To the people who want to be Don Draper because his suits are nice: Y ou are mad .) Then, at the very end of the last season, the writers provided some definitive character development for Don, when he sabotaged his job and revealed his past.

The first episode of the seventh series acts mainly as a slow-moving reintroduction to the characters – lonely, heartbroken Peggy; lost, feckless Roger; needy, smarmy Pete; steely, wounded Joan – but it’s saved by the usual saturated colours, dreamy shots (Don on a moving walkway gliding by a mosaic) and beautiful/stagey dialogue (“He was thirsty and he died of thirst,” says a new character of an alcoholic husband).

The dramatic question for the final series, which is evoked at the end of this episode, is whether Don’s recent openness leads to redemption or to him freefalling like the animated man in the title sequence. “See how cool he looks as he plummets to his death. What suit is he wearing?” lifestyle journalists will probably still write.

Party House (E4, Wednesday) is a new scripted reality programme in which youngsters you don’t know have a house party and deal with several love triangles. As they jump into swimming pools, spray graffiti on the walls and dance while wearing outré masks, an overexcited narrator talks about how much fun it all is. These are lives of loud desperation.

The key characters, who have names such as Shoey and Yaz, talk in endless boring detail about who they wish to kiss, thus negotiating the mores of contemporary party culture (the loud music comes conveniently down in volume whenever they talk, which must be annoying if you’ve came to the party to twerk against a man wearing a horse’s head). It’s a bit like Jane Austen, I suppose, even down to what appear to be the presence of uniformed officers. Okay, I’ve just been told that vintage military jackets are fashionable right now and so these young men are not likely to be shipped off to the front in the morning. In conclusion: I have no idea what’s going on. And bring back conscription.

Crossfire (TV3, Monday, Friday) is an enjoyably no-nonsense quiz show with clear-cut rules. Four men (thus far it always seems to be men) stand in a blood-red studio trying to win points that they can then maliciously pass to another player. Too many points and you are eliminated. There is something primal about a man’s desire to best his fellow man in feats of trivia. I can actually imagine stumbling into a forest clearing to find people playing Crossfire by torchlight, either as a form of tribal government, pagan religion, or as a sort of no-holds-barred, bare-knuckle pub quiz (an alternate ending to True Detective ?).

At the centre of it all is Sean Moncrieff, a tall, smarter-than-average broadcaster with the round, furrowed head of a Peanuts character and the authority of Lord Summerisle from The Wicker Man . No fake-tanned, glittery quiz-master he, Moncrieff submits himself stoically and wittily to the whims of the system.

“Unfortunately, John, you were caught in the crossfire and the lights go down on you,” he says sadly but firmly, when John, who once met Jackie Onassis (this is the type of fact that defines people on a quiz programme) falls foul of the game. John is then submerged in darkness. I presume he’s led screaming to the car park by a man in an animal mask and placed on a wicker pyre, but his microphone is muted so I can’t be sure.