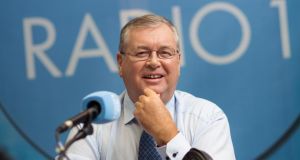 Joe Duffy: for all his ability to read the electorate’s intentions, the Liveline host seems oblivious to voter fatigue

The late American writer Gore Vidal once identified “the four most beautiful words in our common language: ‘I told you so.’ ” Such triumphant self-assurance may not be part of Joe Duffy’s on-air persona, but as he surveys the remarkable election results on Monday’s Liveline (RTÉ Radio 1, weekdays) he manages to parp his own trumpet just a little bit.

Referring to his shows in the run-up to polling day, Duffy says he detected a swing towards Micheál Martin and Fianna Fáil in the “tone and timbre” of his callers, as well as a growing hostility to Labour. “I couldn’t say it at the time,” he adds, lest anyone question his impartiality or raise the spectre of hindsight.

The soothsaying qualities of his programme thus confirmed, Duffy decides to consult his audience about the uncertain political future.

Some callers decry the “experts” who called the election wrong, but these unmediated contributions are predictably fractious and muddled. One caller from Tipperary says that the local Independent TD Michael Lowry will always “do what’s best for the country and what’s best for his constituents”, an assertion that pretty much sums up parish-pump politics.

Duffy holds an impromptu poll on the possibility of a Fianna Fáil-Fine Gael coalition. This attracts 8,500 texts in five minutes, with 51 per cent in favour: impressive but perhaps not as authoritative as Duffy makes out. “There is a nation completely and totally divided,” he proclaims.

Warming to the oracular abilities of his listeners, he then asks if they favour another election. This poll’s results are clearer cut: not only are 62 per cent against, but the turnout is down, with only 7,000 replying. A third poll – would they cast their vote differently? – attracts even fewer responses. For all his apparent ability to read the electorate’s intentions, Duffy seems oblivious to voter fatigue.

Others are more obviously attuned to the national mood. As he dissects Ireland’s rugby defeat to England on Monday’s edition of Today with Sean O’Rourke (RTÉ Radio 1, weekdays) the broadcaster Tom McGurk sounds surprisingly upbeat: “Do you hear that sigh of relief across the country? We’ve stopped politics. Thank God for that. Back to something serious.”

It is, however, only a brief and belated respite. O’Rourke has already comprehensively reviewed the weekend’s results, beginning his analysis with Bertie Ahern.

The discussion is intriguing, partly for the former taoiseach’s observations – “People eat each other on the ground, and it doesn’t lead to great stability,” he says of multiseat constituencies – but also for the simple fact of his presence.

Only recently characterised as the architect of the Celtic Tiger bubble, Ahern had effectively vanished from the airwaves since the crash. Over the course of this election, however, he increasingly turned up on the radio in the role of venerable sage. This in itself may give some insight into how the election turned out.

Those seeking an election-free zone could do worse than tune into The Niall Boylan Show (4FM, weekdays). The choice of topics on this daytime phone show may be ostensibly rooted in current events, but they really serve as an excuse for some fireworks. (Boylan’s night-time show, by contrast, is more like a cider party around a dangerously unstable bonfire.)

On Tuesday Boylan asks if the institution of marriage – specifically, religious marriage – is outdated. To get things going the host happily declares himself a “hypocrite” for getting married in a church despite not being a practising Catholic.

After a slow start, things get interesting when a caller appears to advocate arranged marriage between teenagers, although it’s hard to tell.“Work with me, Michael,” says an amused Boylan, “I’m struggling to get some sense out of you.” After this the floodgates open.

Jimmy, a Wexford native, blames Nell McCafferty and Mary Robinson for destroying marriage and, in a rare reference to the election, counterintuitively concludes that the outcome is a rejection of the marriage-equality referendum.

Boylan knows his territory well, acting as both honest broker and agent provocateur, as when he states “the fact” that the children of single parents are more likely to get into trouble. Mostly he maintains an air of wry engagement. But when one listener suggests that he conduct a text poll “to see if talkshows are outdated”, Boyle’s equanimity is briefly disturbed. If his talkshow is redundant, he remarks peevishly, why are listenership figures up 30 per cent year on year?

For broadcasters, as for politicians, there’s only one poll that counts.

Moment of the Week: Rusty Hook hits out