Review: Ryan Tubridy is the closest thing Irish radio has to the much missed Terry Wogan 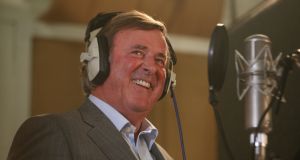 This is Ryan. He talks on the radio. Ryan does not like silly words. He wants things to be simple. The late Terry Wogan may have used childlike sentences to comic effect in his BBC show’s saucy Janet and John pastiches, but Tubridy seems to regard any adornment of language with extreme suspicion, if last Wednesday is anything to go by.

With his programme (The Ryan Tubridy Show, RTÉ Radio 1, weekdays) truncated by the dissolution of the Dáil, the presenter takes the opportunity to complain about how some words are confusingly and unnecessarily replaced by other apparently inappropriate terms. He cites “the way the word ‘life’ has been replaced by ‘journey’.” But his real wrath is aimed elsewhere.

“Somebody somewhere along the line decided that the word ‘room’ was going to be replaced by the word ‘space’,” he fulminates, with exaggerated outrage. As grievances go, it’s minor, but he spins it out for half the show. He mocks RTÉ’s television show Home of the Year, where the word is seemingly deployed so often that Tubridy plays “space bingo” while watching. He berates people in the arts for using terms like “performance space” and “exhibition space”. And, while he allows his caller Brendan, an urban planner, to talk about “open spaces”, the host pulls him up for supposed misuse of the word “place”, issuing a “gobblydegook alert”.

Throughout all this, Tubridy shows off the gifts that make him the closest thing contemporary Irish radio has to a Wogan, whose light touch and wry riffing often belied his culture and intelligence. Tubridy, who was a friend of Wogan, doesn’t quite have the deftness of the late BBC broadcaster, not least in his ongoing balancing act between healthy scepticism and plodding conventionality. But in transforming such a flimsy premise into a moderately diverting chunk of radio shows off Tubridy’s easy command of his medium and indeed of language.

With the election already throwing up an intolerably shrill gaggle of voices, his deceptively effortless approach provides a welcome tonic. Tubridy also gets in a timely jibe at one particularly irksome use of his trigger word. “How’s your fiscal space these days?” he asks Brendan, adding that he already feels “fiscally spaced out of it”.

God knows how Tubridy must feel after what follows on The Seán O’Rourke Show (RTÉ Radio 1, weekdays). As O’Rourke plays host to the opening salvoes of the election campaign, he plays his own version of space bingo. “I’m going to try and keep a tally on the number of times the word ‘fiscal space’ is used,” he says, after Sinn Féin’s Pearse Doherty utters it twice in quick succession. If O’Rourke was seeking to deter his other guests, he fails. Fine Gael junior minister Simon Harris repeatedly wheels out the term, his stabs at self-awareness only compounding the ridiculousness. “I know the phrase fiscal space is becoming some sort of buzz phrase,” he says. “Yeah, we’re up to 11 now,” answers his host. Harris makes a weak joke about putting change in a jar each time it’s mentioned, but still can’t help himself, scoring a rapid-fire hat-trick, using the dread word “space” three times in 10 seconds.

At this point the campaign proper is barely a half hour old, but already the level of debate between the political opponents has reached soul-crushing levels. Humourless jibes and petty point-scoring trump any substantive discussion, with metaphors mangled for good measure. “Beware of scorpions bearing gifts,” warns Independent Alliance TD Shane Ross, suggesting he’s not too bothered by plain old scorpions. By the end, even as authoritative a host as O’Rourke struggles to put much shape on proceedings, sounding more like a substitute teacher overwhelmed by a particularly unruly class.

Another example of guests taking over proceedings can be heard on Sunday With Miriam (RTÉ Radio 1). With the news of Wogan’s death having just broken, O’Callaghan invites Gay Byrne to pay tribute to his old colleague. This he does, in the idiosyncratic manner that has become the trademark of Byrne’s later career, as he devotes as much time to the workings of the old Radio Éireann as to memories of Wogan.

Byrne is then joined on the phone by fellow veterans Brendan Balfe and Mike Murphy, the latter clearly having just heard the news. “What happened to him?” asks Murphy. “Cancer, apparently, Mike,” answers Byrne. “You’re kidding me. Oh God, isn’t that just awful.” For a moment, it’s as if the studio isn’t there.

If the shock briefly banishes Murphy’s renowned laconic poise, it soon returns. “I always felt Terry would simply trundle on forever,” he chuckles. “A bit you like yourself, Gay, there was no stopping him, whether they wanted him there or not.” In the face of such jousting, O’Callaghan largely hangs back, allowing her guests to swap mischievous anecdotes about Wogan. By the time Byrne attempts to withdraw – “So I’ll leave you here, Miriam,” he regally informs his host – Murphy has effectively annexed the airspace.

“Gay,” he drawls, “would you hang on as long as you can, because I don’t want to be getting up every Sunday morning to do one of these.” Cue bellows of laughter. “You should all do a show together,” says O’Callaghan, apparently not realising this is what’s just happened. It’s a fitting way to mark Wogan’s spirit of gentle anarchy and irony. We may all want more of it in the weeks to come.

Moment of the Week: Healy hits at humbug

When Jonathan Healy, host of Lunchtime (Newstalk, weekdays), interviews the Fianna Fáil leader, Micheál Martin, he asks whether the slogan “Ireland for All” is “harking back to the days of Fianna Fáil trying to keep everybody happy?” No, say s Martin, his party wants to support the self- employed, homeownership, enterprise, and access to healthcare and education, and to fight crime and homelessness. Healy replies: “ I come back to the point that that’s trying to make everybody happy.”