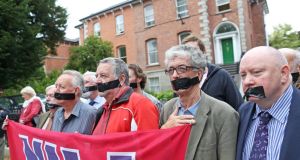 The National Union of Journalists has protested to the Egyptian ambassador to Ireland about the “unjust sentencing and incarceration of al-Jazeera journalists” by an Egyptian court this week.

A letter demanding the “reversal of the travesty” of the convictions, which have provoked international outrage, was handed to the personal assistant of Ambassador Sherif Riad Ahmed Elkholi at the Egyptian embassy in Dublin.

They were joined by the vice-president of the Irish Congress of Trade Unions, Patricia King, as well as academics and journalists representing all sectors of the media.

The NUJ has also written to Tánaiste and Minister for Foreign Affairs Éamon Gilmore, urging him to summon the ambassador and to intervene against the imprisonment.

“We didn’t ask for big crowds to hand in the letter because we believe the attack on journalists from al-Jazeera is an attack on freedom of expression. This is an attempt by the Egyptian government to close down information.”

He said there are “horrendous abuses of human rights in Egypt” and he said that al-Jazeera in particular “were making life very difficult” for the government in Cairo.

Mr Dooley rejected talk of a presidential pardon for the three journalists as “utterly unacceptable” and demanded an overturning of the verdict.

Don’t sing so close to me: Choirs in the Covid era
7