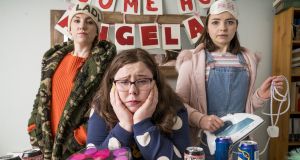 Clare Monnelly, as an aggressively direct friend Mary, Alison Spittle as Angela and Genevieve Hulme-Beaman as the nicely awkward Brid in Nowhere Fast

At first glance, that just seems like tempting fate. Spittle, a stand up comedian on the rise, stars as Angela, a young woman flaming out of a media career. It’s almost the standard set-up of a mainstream romcom, which often have their ambitious, professional heroines thoroughly humbled in the opening minutes to make them, in that dread phrase, more “relatable”.

But Spittle and her co-creator Simon Mulholland actually perform a neat sleight of hand: Angela may be in a downward spiral, but there’s an edge to the comedy that feels like a show willing to push the boat out.

Take the circumstances of Angela’s ruin, inadvertently libelling a growly media misogynist on a hot mic long enough to capture her imaginative character assessment: “He’s the kind of fella who would wank over a pile of briquettes.” There’s an absurdity in the line that almost obscures how close to home the gag lands, broadcast by a station cowed by comparable libel cases, and featuring a “controversial columnist” with antediluvian sexist views who could currently stand in for any number of real-life candidates. (Mercifully, it is they, rather than their accusers, who are now losing their positions.)

Angela, however, retreats to her family home in Athlone and the smothering attention of her chronically unrestrained mother Caroline (a divinely funny Cathy Belton), a stepfather trying to hack it in the motivational poster racket (“I’m thinking of packing it in,” deadpans Mark Doherty), and a younger sister she is pathetically keen to impress.

Spittle is a more comfortable comedian than an actor, supported here by the calibre of her co-stars Clare Monnelly, as an aggressively direct friend Mary, and Genevieve Hulme-Beaman as the nicely awkward Brid.

With her hair piled into a bouffant, hoop earrings dangling to her shoulders, and her features set to witheringly unimpressed, Monnelly is brilliantly vicious. “Right, girls, let’s get out of here,” she interrupts Angela’s family party. “That football team isn’t going to f**k itself.” Challenged for crashing another girl’s party, she breezily retorts, “I’ll tell your granny about your trip to England. Spa weekend was it? Full body massage and womb scraping?”

Mary could be a close cousin to Aisling in RTÉ’s comparable comedy Can’t Cope, Won’t Cope, another engaging whirl of destructive behaviour. But it’s worth remembering how few peers they have in television sitcom, a genre that has long confined its female leads to the straight roles, flawless and forgiving, against loveably boorish men.

That lets Nowhere Fast go into some dark places surprisingly quickly: Caroline’s compulsive preoccupation with suicide, for instance, or the hair-raising comedy of binge drinking, or the simmering hostilities and rivalries in a small town.

The opening episode concludes with Angela, stretched out and slurring on the ground, asking someone to set an alarm for her new job in the morning, because, she says with all the dignity she can muster, “I’ve lost the use of my hands.” That kind of joke cuts close to the bone, giving us a character who is wildly, but not unbelievably out of control, within a show that knows exactly what it is doing.