Now that the end is nigh, it’s finally time to review Donald Trump

The final season of ‘America’ began on Monday night, and the sense of apocalyptic dread was palpable right from the off 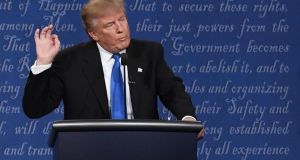 I’m quite enjoying the final season of “America” (The US Presidential Debate, Monday, BBC News). This week’s episode was excellent and I think we’re in for an exciting finale. And then humanity will leave the stage and it will be the insects’ turn to be this planet’s dominant species. I think you’ll agree: we’ve had a good run.

As a television reviewer, this is my moment. America has had television presidents before (Kennedy, Reagan, Bartlet) but Donald Trump is an actual television character not a human person with a social security number and/or a soul. It’s as if Alf from the sitcom Alf was running for president (he’ll probably run in 2020 if America survives that long). Also: Trump is the same colour as Alf.

So the debate is kind of fun if you’re a clickbait-chasing columnist who enjoys apocalyptic dread. Indeed, US discourse is now so divided, I wasn’t entirely sure these two candidates could exist in the same space and dimension. Hillary Clinton is a human woman who has served as Secretary of State. Trump is a CGI-animation created by the internet in its first phase of sentient madness.

Ultimately Clinton, wearing a suit dyed red with the blood of her enemies, emerges looking pretty presidential. Well, she does, if you hold fast to the ideas of the old world – that policy should be partially fact-based, that politicians need to be consistent, at least from sentence to sentence, and that your leaders should read their briefs and not just wear them on their heads while throwing their own shit at you.

Stylistically, her role is to be a straight woman to Trump, who has modelled his performance on a basket of cats. She calmly laughs at his more outlandish statements or remains impassive at his insults or stares at him with faux amazement, as if to say “get a load of this guy”.

Shaved tribble
Trump blusters and purrs and expands and contracts like a shaved tribble. He is standing against a wall inscribed with the incantations and computer codes which were used to summon him and bind him to this realm (editor’s note – that’s the Declaration of Independence).

His eyebrows are arched like eagle’s wings over the little buttons he has for eyes. His lips are always either pursed like Pob’s or arranged in a smug line like Zippy from Rainbow. His flesh is the same colour as his hair, much like a baby doll in a skip. He is a colour that has never existed on earth before (except for Alf). There’s a border zone where his forehead gives way to hairline. It’s fuzzy at this intermediary zone, and if you look into the fuzz you will see the face of Kalki, the final avatar of Vishnu, screaming the one true name of God.

When he speaks, Trump makes dainty hand gestures with his finger buds to emphasise his points. His favourite gesture is to make an “O” with his index finger and his thumb and he gesticulates wildly with this “O” as though punching an annoying puppy on the head. If you look into that “O” you will see the future. And the future is stupid and weird and filled with dying, confused animals branded with the word “Trump”.

“Words matter,” says Clinton. And Trump knows that. He says words all the time even though his more natural mode of expression is a terrifying, lonely, high-pitched scream. Today, he vomits out sentence fragments like a cursed, badly programmed chatbot. Sometimes, after he says the words, he will say “I never said that” about the same words. Listening to Trump talk for longer than a minute is like having a dissociative episode.

He wants NATO countries to pay the US military or he can’t guarantee their protection. He wants racist stop-and- search policies in major cities. He settled that racial discrimination suit out of court, he says. He understands “cyber” because his son is good at computers. The current US president was born in the US, probably. He will restore the fortunes of ordinary Americans by liberating the rich from taxes and regulation. He started his business with a “small loan” from his father ($14 million). He will not be the first person to use nuclear weapons in a stand-off, but he will not rule out being the first to use nuclear weapons in a stand-off. He doesn’t pay very much tax because he’s smart. “Trump!” thinks Trump.

The average Trump supporter
Clinton wins the debate by responding with facts, experience and actual policies, but then I would say that, because I’m from a country which still has a social security net. I have no idea what the average Trump supporter can see. None of us has shared the same reality since Roger Ailes first opened the portal to hell.

Clinton and her ilk have to take some of the blame. For 30 years, supposedly progressive politicians have helped support the development of a global elite and have largely ignored the destruction of the local middle class. And years of soft lies from all sides have slowly loosened the truth entirely from its moorings. Trump really didn’t come from nowhere.

Members of that wounded, declining American middle-class now believe facts are entirely a matter of taste. They are desperate and angry and are intent on making Trump – a venal, petty, racist liar – the last president of the United States. On the plus side, it will make for some excellent television.

Fleet Foxes: ‘I’m trying to find silver linings in this madness, a healing space in music’
5