Master of None defies the zeitgeist with its cheer and decency 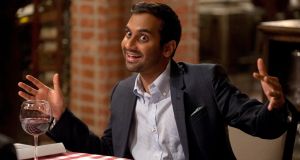 In 2015, Aziz Ansari’s Master of None (Netflix) managed the impossible, to restore our faith in humanity – no big deal. Bold and ambitious, the series looked like a glossy, New York indie film but sounded like a flurry of excited Whatsapps from a friend. It was in love with life and wanted you to feel the same way, which these days is a radical message for a modern comedy show.

To be cheery in comedy is almost the kiss of death: a one-way ticket to Dullsville via the bar in How I Met Your Mother. Edgy comedies such as Love, Fleabag and You’re the Worst thrive on being as bitter, cynical and brutal as their dramatic counterparts.

For every raw, exposed truth, there was a dollop of the beautiful banality of the everyday to complement it

When Master of None bounced on to our screens, it appeared like an enthusiastic, dorky kid: it was anything but too cool for school, which made it feel fresh and genuinely relatable, compared to the grime and prevailing snark of its contemporaries.

Open-hearted and unafraid to be sentimental and hopelessly, unashamedly romantic, it didn’t just wear its heart on its sleeve, it sported it as a preposterous, light-up novelty hat.

Although sweetly tender, the show didn’t shy away from serious issues. Episodes such as the Emmy-award-winning Parents, the brilliantly astute Ladies and Gentlemen, and the incisive Indians on TV tackled huge themes such as race, gender inequality and discrimination, but wrapped them up in the delicious, soft burrito of modern life. It was palatable polemics, easy to swallow and made you feel warm inside.

For every raw, exposed truth – like the treatment of immigrants in society or the incessant, insidious harassment that women face daily – there was a dollop of the beautiful banality of the everyday to complement it.

Showing friends binging on the latest prestige telly, arguing over what food to order, the limitless possibilities of online dating: it was a normal, affectionate take on 21st-century living. (It was also free from the usual hand-wringing anxiety that happens in TV whenever someone fires up a laptop or gets a text message.)

Series one ended on a high with an episode stuffed with quotes from The Bell Jar and featuring one of the very best Sparks songs. Ansari and co-creator Alan Yang could have moonwalked away from the project satisfied that they’d made a show that managed to tread that difficult creative line of being culturally specific but thematically timeless. They’d created a detailed love letter to this chaotic, information-soaked age.

Happily pootling
Now they’ve returned with series two. Crucially, it was made before everything went a bit Empire Strikes Back (the Spaceballs version), and it can at times feel trivial. Watching Ansari happily pootling around the city is like the exposition parts of a horror film, the giddy hilarity and freedom before everyone is mercilessly torn apart by a chainsaw-wielding psychopath.

This world of minor disruptions and sumptuous distractions may make some viewers bristle at the show’s first-world problems. Bt it’s not completely fantastical and features moments of real perceptiveness.

Where the second season echos the impact of the original is in its standalone episodes, a sideways glance at tradition and respect in Religion and the beautifully observed Thanksgiving.

Written by Ansari and Lena Waithe, it tells the story of her character Denise and the journey of her coming out through 20 years of family Thanksgivings.Bursting with pop-culture references, it acknowledges the insatiable millennial appetite for nostalgia but weaves it through the hilarious, emotionally dense tapestry of family.

With the added contentious components of race and sexuality, it is the most moving episode of the series. Plus, who doesn’t want to see Angela Bassett in a selection of jumpsuits and forgotten 1990s hairstyles?

Less successful is the dreamy romantic storyline threaded through the series that fails to be as effective as the complex realism of coupledom captured in the first season. (That said, an Aziz Ansari version of a Woody Allen rom-com is much more palatable than the problematic real thing.)

Overall, though, the show’s lush filmic sensibilities, vibrancy and concentration on human decency remind you not only of the value of art but of the small, perfect pleasures that are still to be found in ordinary life, rubrics that are essential for survival. There is Italo Disco to dance to, food to marvel at, languages to be enamoured with, people to lust after, terrible Tinder stories to laugh at with friends; there is always hope, and in the absence of hope, there is always pasta.