Martin King reveals how dementia, like a monster in the night, crept up on his family 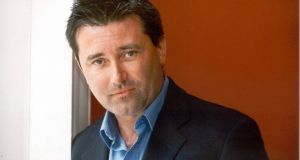 Martin King is one of the more avuncular figures on the Irish airwaves so it is a shock to see the daytime TV host blink back tears and struggle to remain composed during We Need To Talk About Dementia (Virgin Media One, 8pm) .

Dementia, King explains, is the fourth most common cause of death among over-65s in Ireland. Some 64,000 are believed to suffer from it here. And, as it can be hereditary, King, 57, worries he could potentially experience a decline similar to his mother’s.

“I do wonder sometimes: is it hereditary? Is it just in your genes? Then I think: well, is this my future? ... Will my wife need to care for me?”

In a raw and moving documentary he does not minimise the devastating impact of the condition. In her final years, his mother, thinking she was a teenager again, would wonder aloud about the “old man” she saw around the house. It was her husband (who passed away four weeks before her in 2019).

This may seem bleak but there is hope. King meets Marguerite Keating in Tipperary, who developed dementia in middle age yet continues to live a full and rewarding life with daughter Bláthnaid. And he visits St Joseph’s in Shankill, Dublin, the country’s only dedicated residential centre for dementia patients.

“No drugs trollies,” says Norma Sheehan, the nurse who established the facility. The St Joseph’s philosophy, she elaborates, is to treat those in their care as human beings rather than potential case studies. “The whole model is about finding out who the person is and what matters to them”.

King also receives reassurance that genetics do not mean he is destined to develop dementia. Many of the associated risk factors – such as smoking and high blood pressure – are ones over which we have control, says Brian Lawlor, professor of old age psychiatry at Trinity College Dublin. So while genetic heritage can play a part, King still has the power to take ownership of his future by addressing lifestyle issues.

Yet for all the optimism it’s the heartache that stays with you. Simon Murphy visits mother Jakki, who developed dementia in her late thirties. Because of Covid-19 he hasn’t been able to see her for several months and is taken aback by her decline. He hugs her and tries not to weep.

“You think it’s going to get better but it doesn’t,” he says. “You have to watch them again and again, get worse and worse.”