Marc Maron: ‘The first 100 episodes are me asking celebrities for help’

Comedian Marc Maron was an embittered recovering alcoholic before he found his way as a podcast interviewer of brutal honesty. Not even Obama refused the call 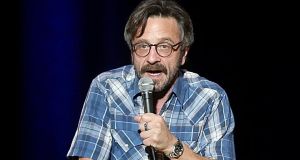 Marc Maron: ‘The reason the podcast is popular is the emotional risks that are being taken.’ Photograph: Gary Miller/Getty Images

In June, American comedian Marc Maron interviewed the president of the United States in his garage. Maron did not see this coming. Six years ago, when he first began producing his podcast, WTF with Marc Maron, he had been let go by Air America, the left-leaning political radio network where he worked, and he couldn’t sell tickets to his stand-up shows.

“I’d gotten bitter. I’d gone broke. I’d screwed up a couple marriages. I got sober and things weren’t panning out,” he says. Starting the podcast was, he says, “born out of desperation”. It was “a cry for help”.

Maron, as fans of his twice-weekly podcast will know, is a reflective, funny, anxious fellow, who begins episodes by rambling amiably or crankily about his relationships, cats, vinyl collection, father issues and self-image as a comedic also-ran whose peers (such as Sarah Silverman and Louis CK) achieved success as he bitterly watched from the sidelines. This emotionally honest approach seems to bring out the best in his interviewees, who have included the late Robin Williams, Lena Dunham, Richard Linklater, Will Ferrell, Mel Brooks, Iggy Pop and Barack Obama.

“I always loved comedians,” he says (over the course of the interview he mentions, among others, Lenny Bruce, Don Rickles, Richard Pryor and George Carlin). “When I was a little kid I found a great deal of solace in the way they were able to frame almost anything. [Comedy] was a very acute, effective way to understand life and the world. So when I got into comedy, I don’t know that I necessarily thought about really being an entertainer. I thought being a comedian was a much higher calling than that, that to be a comedian was a way to have your independence and your own point of view and be true to yourself and talk about whatever the hell you wanted to talk about . . . A comedian was like a poet or a philosopher – someone who could hold his own and was given an opportunity to do that publicly.”

This notion of comedy wasn’t necessarily conducive to success, though. He became an “angry, confrontational, button-pushing comedian”, he says. Was that healthy?

“I don’t know. I was young, you know? I just wanted to be a comedian. And I was terrified. The very idea of being funny is a defence mechanism. It’s a way to protect yourself or distance yourself by shedding light on something . . . I don’t know if I’m corroborated on this by Freud or anyone but it’s a fundamentally defensive impulse. I don’t know any creative people who come from emotionally dubious backgrounds who aren’t angry in their 20s.”

“I just maintained that anger well into my 40s.”

A kid with a cocaine problem

He partied hard, most notably with his sometime mentor, the self-destructive, politically incorrect Sam Kinison. “I was a kid with a cocaine problem who drank too much and I went through periods where shit was out of control and scary, but I never lost everything. I didn’t have much to lose and I was relatively functional as a comedian – which is a pretty small life when no one knows who you are. It’s easy to be a manageable drunk when your life doesn’t even require that you wake up at a certain hour.”

He had a knack for sabotaging his own career and falling out with his more famous friends. “I was reactive, so if anyone got successful, my first reaction was: why not me? I just thought eventually I would be selected. I was completely driven by insecurity and anger and fear. I had no business sense at all. I had no idea how to function as an adult. I was just released into the world with a certain amount of entitlement and expectation.”

He did the late-night talk-show circuit and had flushes of success. In the early 1990s he replaced Jon Stewart as the host of the Comedy Central stand-up show Short Attention Span Theater and “hated it. I saw myself as a truth-teller, a guy raging against the powers and I had no money and nothing to show for it. They’re writing horrible things for me to say and I’m barely on camera. I was livid. I just lost my mind. I made them bring in a writer so we could do actual comedy.”

He did that for about a year. It wasn’t all bad, he says. He learned how to read a prompter. In the 1990s he auditioned unsuccessfully for Saturday Night Live (something he mentions frequently on his podcast) and he had a bit part in Cameron Crowe’s Almost Famous (a clip from which also intros the show).

He got sober in 1999, helped by his future second wife, the comedian Mishna Wolff. “I ended up holding on to her for eight years, sort of destroying my life to be with her, and then she left,” he says matter-of-factly.

He began presenting radio with Air America, but he clashed frequently with management and they let him go in 2008. He had divorced Wolff the previous year. By the time he started recording WTF, interviewing old friends from the comedy world, he was “in trouble in almost all ways in my life. It was really about me trying to reintegrate myself into life and to find joy and connection with people’s stories and not be as lonely and insulated in my own problems. If you listen to the first hundred episodes it’s me asking celebrities for help.”

Over the years WTF has cemented a reputation as a very effective and affecting interview show, with Maron expanding his interviewees beyond his comedy pals to musicians, actors, directors, writers, wrestlers and an American president.

Some episodes are beautifully raw. Robin Williams was brutally honest about his depression. The Louis CK episode is essentially two hours of Maron and CK, former friends, thrashing out their issues (CK used chunks of the conversation as the basis for an episode of his sitcom Louie).

His interview style was never a calculated thing. “I’ve always been a ‘too much information’ person and I have no etiquette around what is appropriate or inappropriate to talk about emotionally,” he says. “Harnessing that and finding an outlet for that and having emotional conversations with other people was immensely helpful to me personally.”

He no longer falls out with his peers. “I’ve grown up. Getting sober, you sort of learn there are repercussions to compulsive behaviour, whether lashing out or hurting someone’s feelings on purpose because maybe you feel injured or violated. I try to manage that stuff so I’m not stacking up a bunch of new amends to make. But look, it’s not beyond me to be an ass.”

He has been welcomed back into television with his sitcom Maron (which you can watch here on Fox UK) and the more reflective, easygoing style of his podcast has seeped into his stand-up. “I like to be as open-hearted as possible when I’m performing, and to make that available to an audience.”

The last time he was in Ireland was for a string of gigs at the Kilkenny Cat Laughs festival in 2010. He was little-known here at the time and it took him a while to get the measure of the crowd. “I don’t know if there’s a history of slightly manic neurotic Jews in Irish culture,” he says.

People know him now. He finds his unexpected late success “completely mind-blowing, humbling and gratifying” but he is still anxiety-prone and fearful it will all go away. He’s thrifty. He lives alone (with his cats) in the same two-bedroom house and frets about purchasing a new car (a Toyota Camry). He still sees himself as “marginal”.

But he’s not really an embittered underdog any more though, right? I mean, the president of the United States was in his garage. “The Obama interview was amazing,” he says. “It was an international event and it happened in my backyard and it was mind-blowing and emotional, but when the secret service go away and the helicopters go away, I’m looking at who I have to interview the next day and I’ve got to deal with my stand-up. It’s not like I was awarded some medal of honour or something.”

He just wants to be honest and authentic, he says, and he is humbled when he hears that his interviews have helped people with their own struggles. “Those conversations are important to have with human beings. The reason the podcast is popular is the emotional risks that are being taken. Those types of conversation are very nourishing to the heart.”