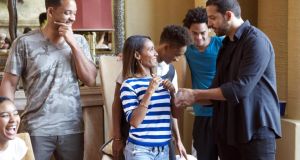 How does he do that? David Blaine with the actor Will Smith and his family

David Blaine, Real or Magic (Channel 4, Wednesday) begins with clips from a typical day for David Blaine. He stands glumly on the outskirts of a city, breathes fire in the desert, drives his motorbike while wearing scary make-up and mysteriously throws playing cards from a skyscraper (which is just littering, really). That’s how Blaine rolls. Lest we are in any doubt about the kind of fellow he is, words shimmer on to the screen in a scratchy font: “rebel”, “eccentric”, “gypsy”, “hero”, “magician”, “necromancer” (is that either accurate or legal?), “antagonist”, “warlock”, “animal”. The long list of apparently random nouns continues: “goon”, “quantity surveyor”, “duck”. Actually, I added those myself.

A typical David Blaine magic trick might involve asking someone to think of a card. Say it’s the nine of hearts. Then Blaine will cut open some fruit and there it’ll be, the nine of hearts, or he’ll spill water on the ground to reveal the words “nine of hearts” written on the pavement, or your mother will reveal she was actually the nine of hearts all along. Then, because that doesn’t seem very impressive on camera, Blaine will plunge an ice-pick through his hand or stop breathing for half an hour.

Blaine’s shtick – bar-room card tricks and self-harm – is visually underwhelming compared to the spangly, toothy Vegas magicians of yore, so he overcompensates with ridiculously famous celebrity guests – including Kanye West, Will Smith and family, Aaron Paul and Bryan Cranston from Breaking Bad, and cuddly watercolour painter George W Bush – whose job it is to convey suitable levels of amazement from which we, the viewers, can take our cue.

So for an hour we watch the largely super-famous standing in their own homes acting like Scooby Doo and Shaggy responding to “G-g-ghosts!” in a Hanna Barbara cartoon. “Whaat!?”, “That’s impossible!” they gibber, as half-smiling Blaine pulls cards from their pockets or self-injures for pennies. The implication in the programme’s title is that if you can’t understand the mechanics of something, it might be supernatural. These celebrities certainly seem to believe this to be the case as they hyperventilate and weep. “How did you do that?” they gasp, and I imagine a technology programme in which Woody Harrelson, Harrison Ford and Katy Perry have their minds blown by impossible phenomena such as television sets, automobiles and fire (“How did they do that!” they’d cry, before their handlers subdue them with tranquilliser darts).

But the most interesting part of David Blaine, Real or Magic, is the bit where he attempts to learn a rare water-regurgitation stunt he saw an African man perform in a YouTube clip. He tracks the man to impoverished Liberia where he learns the trick, then goes home to debut it at the launch of Robert De Niro’s new hotel. As unintentional illustrations of globalised inequality go, this is compellingly depressing.

And then in this dystopian spirit, it occurs to me, maybe this isn’t just a programme about David Blaine doing tricks in the large spotless kitchens of the super-rich, but one in which all these celebrity households actually got a “David Blaine” for Christmas . . . like a Furby.

Of course, Sherlock isn’t dead. This shouldn’t be a surprise. The fact that Mark Gatiss and Steven Moffat’s hugely enjoyable reboot is still called Sherlock and not Sad Watson, should have given the game away. No, Holmes – aka Benedict Cumberbatch with his face like a pale, handsome, well-sucked wine gum – is alive. He’s away, under cover of death, dismantling Moriarty’s crime network of eastern European stereotypes while his roundy-headed, roundy-minded brother Mycroft (Gatiss) learns of a new terrorist threat (terrorists in Sherlock, like the terrorists in Die Hard, don’t have coherent geopolitical aims but do their terrorising largely for recreational and social purposes).

Meanwhile a group of Sherlock fans called the Empty Hearse meet to discuss how their hero survived his seemingly fatal fall and some theories, including some Sherlock/Moriarty erotica (one for the mums), are woven teasingly through the plot. “A bit disappointing,” observes one chap reasonably, after Holmes apparently gives his own explanation. “Everyone’s a critic,” says Sherlock, resisting the urge to wink at the camera (there were a few times in this episode I thought he might start addressing the audience directly, Frankie Howerd style).

This metatextual nod to internet fandom borrows from a 2006 episode of Doctor Who, but it’s apt. No show better mirrors the wired, multilayered world of the web than Sherlock. The script is filled with in-jokes and references, while Sherlock’s internal world is a bewildering information superhighway of zooming cameras, freeze frames, arrows and floating footnotes.

But there’s danger in listening too closely to the fans. While the appeal of Sherlock comes from watching a clockwork mind deconstruct a clockwork universe, the show loses tension if the plot becomes too self-referential, the writers too-cool-for-closure or the hero too death-defyingly omniscient. And while it’s hugely enjoyable to watch Holmes and Watson bantering like a reunited vaudeville act, and the storytelling is as characterful and visually and verbally witty as ever, there actually isn’t much story to tell – an underbaked terrorist plot so easy to crack Sherlock turns it into a practical joke on Watson, an unexplained kidnapping and a brief shot of some villainous eyes representing an as yet unseen adversary. I’m worried it’s going to be David Blaine.

Death Comes to Pemberley concluded its soapy frocksploitation on Saturday (BBC1). Based on PD James’s whodunit-style sequel to Pride and Prejudice, its heroes clearly foreshadow another wealthy detective couple. Yes, Death Comes to Pemberley is a beautifully shot, highly enjoyable, 19th-century Hart to Hart. Fitzwilliam and Elizabeth Darcy – “When they met, it was moider”.

Bernice Harrison is on leave

The best family-friendly films on Netflix
4

Coronavirus: Destination New York – Why have so many died in this city?
8

Science and the humanities in the time of pandemic: better together
9