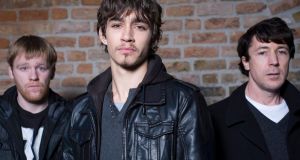 The numbers pretty much speak for themselves. Love/Hate’s finale, in November 2014, drew in more than a million viewers. At one point the crime series was being watched by more than half of all the people watching anything on television in Ireland at the time. And until Normal People arrived, it held the record for the most streams on the RTÉ Player. Soon, viewers from Australia to South Korea were in on the action.

Love/Hate, which premiered on RTÉ in October 2010, was televisual lightning in a bottle. No wonder RTÉ was so keen to bring it back. And now, from tomorrow, fans will be able to rewatch it all each Friday night, as the series slots into the gap left on RTÉ One by the vacationing Late Late Show.

So, 10 years after we first met Nidge, Fran, Darren and the other ill-fated criminals, just why was Love/Hate the critical and commercial smash that it was?

Whether it’s Tommy asking gardaí for fizzy orange after a botched kidnapping, sex toys in customs or Nidge’s moll looking for a cushion ‘for me knees’ mid-coitus, Love/Hate  had a lexicon all its own

Part of it is timing: with newspapers full of reporting on the real-life Dublin criminals of the time, TV audiences already had a baseline interest in the show’s dark premise. With Ireland fully in recession by 2010, Love/Hate seemed like a love (hate) letter to a city that was in a bad way.

Aside from that, 2010 was considered part of a golden era for TV – Breaking Bad, Mad Men, The Sopranos and The Wire were all showing, or had been until recently – and, well, it was high time we in Ireland had a contender of our own. Besides, an Irish drama with a strong sense of place was long overdue.

Initially, the show was slow off the blocks, despite a promising cast that included Aidan Gillen, Ruth Negga and Robert Sheehan. Critics bristled at the glorification of gangland. Menace and violence were brewing, certainly, but tempered with plenty of light relief. Nidge Delaney (Tom Vaughan-Lawlor), at that point a weaselly, middle-tier wannabe, was still learning how to load handguns from YouTube tutorials, all while upkeeping his (lols) Bebo page and planning a tacky, wallet-busting wedding.

But Love/Hate soon found its groove. Audiences became ever more drawn to Nidge, Darren (Sheehan) and the unpredictable Fran (Peter Coonan). As is the way in the criminal world, kingpins and higher-ups were disposed of, paving the way for young, ambitious types (and, ergo, a fresh-faced cast). With Maureen Hughes ingeniously casting a number of relatively unfamiliar actors – Coonan, Killian Scott, Barry Keoghan, Charlie Murphy, Johnny Ward, Caoilfhionn Dunne, John Connors – Love/Hate had a youthful energy and identity of its own, allowing an audience to invest in the characters.

Whether by accident or design, choice lines and salty insults in the series soon went viral. Whether it’s Tommy asking gardaí for fizzy orange after a botched Tiger kidnapping, sex toys in customs or Nidge’s moll Janet looking for a cushion “for me knees” mid-coitus, Love/Hate soon had a lexicon all its own. The comedy became the perfect foil in a show otherwise spattered with violence, where each week involved guesswork about who might be next to meet their maker.

Underpinning the subversive script and brilliantly Irish language was a sense that RTÉ was giving Stuart Carolan, Love/Hate’s writer and creator, and his fellow programme-makers a hall pass to produce exactly the show they wanted to. And when that happens, things can go pretty much anywhere.

Carolan had no problem offing major characters with nary a warning, and this only added to the addictive, sickly tension of the plots. By season five the unhinged Fran was on a mission to kill Tommy, and everyone was on a mission to kill Nidge, who had turned into a hypnotically Machiavellian tormentor. Who, if anyone, would get there first? Sorry for sounding hyperbolic, but Sundays could barely come quickly enough. Add double-crossings galore, a cat-and-mouse game with law enforcement and the sort of sex scenes that would give a Liveline listener cause for a trip to the fainting couch, and serious bangs for bucks were going on here. Suffice to say your next few Friday nights are sorted for quease and fizz.

Love/Hate begins on RTÉ One at 10.50pm on Friday

Róisín Murphy: If I want to be famous I can just go to a gay club
10