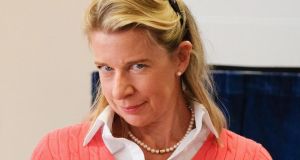 It sounds like a scene from a bad thriller. A quiet family home is suddenly invaded by a group of intruders, who set about taking over the house. Amid a cacophony of menacing voices the distressed resident pleads for help from the police, to no avail. This disturbing clip, as aired on Liveline (RTÉ Radio 1, weekdays), is not the set-up to some scary movie. Welcome to the reality of rented housing in Ireland.

On Tuesday Joe Duffy talks to Piotr, a Polish-born father of one whose Cork home has been so violated. The home invader is his former landlord, who is in dispute with the bank that repossessed the property last year.

With his wife and child on holiday, Piotr, who has been paying rent to the receiver, has not technically been evicted but instead has been shunted to one small bedroom, and has no keys. The landlord’s associates have taken up residence in the home where Piotr has lived for six years. “I am the victim,” he says, but no one in authority seems to care. He has called the Garda but has been told it can do nothing: this is a civil matter. Little wonder Piotr sounds desperate.

As for Duffy, he sounds mad. Watching the visuals accompanying the audio clip (the incident was recorded on a baby monitor), the host is outraged by the sight of a man rifling through Piotr’s belongings. “I would have clocked him,” Duffy says. “How did you keep your demeanour?” “I was thinking of my family,” comes the forlorn reply.

Piotr’s story is only the most alarming of the many emerging from the increasingly dysfunctional rental market. It’s a topic that dominates Liveline this week, as Duffy hears of private properties, in walk-in condition, being bought only to be boarded up and of council flats lying derelict beside occupied ones in Dublin. Duffy’s show has an uncanny knack for highlighting the bellwether issues igniting public passion, so don’t be surprised if the rental crisis becomes the new Irish Water.

This possibility is mooted on The Pat Kenny Show (Newstalk, weekdays) during John Drennan’s report on Dublin Tenants Association. Drennan sees the stirrings of a grassroots movement of renters who feel like second-class citizens. They speak of their anxiety in a market where tenure is uncertain and rent increases far outstrip income. Their vulnerability is such that “even people who are in full-time employment are at risk of homelessness.” Kenny says it’s illustrative of “the ‘amateur night out’ nature of the Irish rental sector”.

Perhaps unsurprisingly, some of those most at risk are foreign-born. Kenny reads from one rental contract, which tells the Brazilian tenants to speak only English among themselves, allows visitors only if they gave their full name and phone number, and advises that there are cameras inside the house. All this for the privilege of renting a bedroom.

Clearly, being an immigrant renter is an exercise in double jeopardy. For some, of course, this is how it should be. Kenny speaks to Katie Hopkins, the wilfully offensive British columnist, whom the host describes as a controversialist, which is akin to saying that modesty isn’t Donald Trump’s chief virtue.

As she talks about her recent appearance on The Late Late Show Hopkins initially gives off a provocatively larkish air, deriding the “snowflakes” and “dreary liberal types” offended by her “jolly chat”. But as she expands on her views the mood becomes more uncomfortable.

Hopkins presents herself as a champion of free speech, who allows people “to say what they like”, prompting Kenny to propose the modest caveat of “so long as it is not an incitement to racial hatred”. For Hopkins this attitude is representative of the egregious “media bubble”, where “you sneer at people you consider less intelligent than yourself”. (This from a woman who has described migrants as cockroaches.)

As Kenny gently questions her views Hopkins casts aside any patina of civility. “We’re sick of being told we have to be fond of immigrants and that black lives matter but the Ku Klux Klan are terrible,” she says, giving a masterclass in false equivalence. “All your polls told you Trump and Brexit wouldn’t triumph, and yet we did,” she adds. But this, Hopkins tells her host, “fails to get through to your tiny little pea brain”.

Kenny, who wears his breadth of knowledge as a badge of pride, cannot hide his hurt, repeating the phrase “tiny little pea brain” to himself as if in disbelief. This is only grist to his guest’s mill. When he asks why Trump has settled a lawsuit against his “university” Hopkins doesn’t even bother answering the question. “Nobody’s perfect,” she sneers. “I doubt you’re perfect behind that veneer, which seems very thin to me.”

It’s a shocking exchange. Hopkins’s concept of free speech seems to consist of belittling and demeaning anyone who proposes a different argument. Kenny sounds shaken. On one level it’s hard to feel much sympathy. It was Kenny who invited Hopkins on to his show to create a stir, yet he is taken aback when she lives down to her reputation.

Still, his reaction is surely familiar to anyone whose faith in basic decency has been turned on its head as angry publics seek extreme solutions to desperate situations. Who needs scary movies when real life has become so chilling?

Moment of the Week: Animal passions

How The Simpsons predicted 9/11, Trump and Disney-Fox
6