To play soccer in 1950s Ireland was to defy a nationalist agenda. John Giles had plenty to renounce 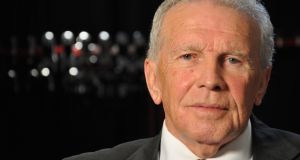 The biggest switch a professional soccer player must make on the road to becoming a professional pundit is to change the direction of his glance. It goes from forwards to backwards.

“Football is all about calculations,” says John Giles at one point in this monolithically-titled documentary, Giles (RTÉ One, Monday, 9.35pm), from his experienced perspective as a player. But an analyst’s work always comes after the fact: discerning those calculations from a distance and arguing whether they added up to something. The documentary, a chronological biography, is likewise all a retrospective. What if your life was measured in replays?

In his own estimation, Giles always had a capacity to see a bigger picture, to be immersed in the game while also observing how he played it. “I had a gift for playing football. I had a second gift to realise I had the first gift,” he says, edging closer to commentary Zen.

In that, he has long been assisted by a naturally bluff terseness and a serious, rigid brow that made him not only seem desperately unimpressed with the world, but a necessary foil to the outrageous arias of Eamon Dunphy. Giles, you feel, knew how to play the game and knows how to play himself.

Interweaving the present day with plentiful material from the grainy archives, director Cormac Hargaden is most interested in soccer’s history, and Giles is borne back to it ceaselessly. He reminisces about meeting his father at the gates of St Peter’s church to see the games of Dalymount Park, where, rather touchingly, he meets Dunphy now. “I miss playing,” says Dunphy. “Do you?” says Giles, genuinely surprised. “I never regretted it from the day I stopped.”

If there’s something defensive about this attitude, it may have been hard forged. To play soccer in 1950s Ireland was to defy a nationalist agenda, and a footballing natural from Ormonde Square in Dublin's inner city found a lot to renounce. “I didn’t consider myself Irish,” he says.

At Old Trafford, he never impresses manager Matt Busby, finally leaving Manchester United – unheard of – intent to prove him wrong. “I’ll haunt him,” Giles resigned, which proved to be a sustaining grudge. At Leeds United, where he spends 12 successful years, he develops a fractious relationship with  Jack Charlton (“Jack wasn’t always right, but he was never wrong”), which even today seems strained, while learning that a small, creative player has to “get your retaliation in first”. Such a mentality gave Leeds a reputation for being dirty players, and Giles, permanently clenched, never quite shakes it off.

Hargaden demurs from getting personal, and that seems to suit Giles fine: you learn little about his parents, nothing about his courtship, and, in an intriguing scene in which he steers all talk about the college aspirations of his grandchild back to football, next to nothing about his family. In its own focus, the documentary is inclined to play the ball, not the man.

And yet it is a curiously sentimental piece, partly because it doesn’t seem to conceive of any kind of life after football, or perhaps none worth having. Much attention is paid to grievance: Giles’s thankless discharge when transferred to West Brom from Leeds; the meagre concerns clubs had for the post-match futures of their players; a prickly relationship with the media.

But for all the admiring recaps of his achievements and his endearments, the piece is disconcertingly valedictory. As the music gets more autumnal, Giles talks about himself in the past tense – “I’ve no regrets about it. I had a great gift” – and reverent as it is, the programme seems more inclined to bury him than to praise him. Football, though, is a present tense experience, and when Giles returns to his old stomping ground (literally, it seems) at Leeds to takes in the sights, at least the game itself seems eternal.

“The ground is different,” says Giles. “The surroundings are different. But I think the pitch is pretty much the same.”