It’s not an election. It’s ‘America’s Next Top Politician’

The world thinks it’s watching a conventional political race, but Donald Trump has been participating in a reality-television show 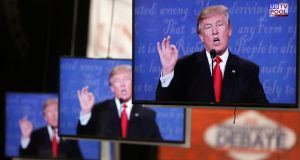 Wednesday’s presidential debate in Las Vegas between Hillary Clinton and Donald Trump contained an unprecedented moment in modern US politics. When the moderator, Chris Wallace, pressed Trump on whether he would accept the result of the election, on November 8th, the Republican nominee replied, “I’ll keep you in suspense.”

It was a stunning statement, one that Clinton immediately described as horrifying and which generated huge criticism across Twitter and, subsequently, among news-network pundits. “Political suicide” said the right-wing commentator Charles Krauthammer on Fox News.

Coming from a politician, the refusal to accept democratic norms indeed seemed dangerously reckless. But the remark was not the vow of a serious presidential candidate. It was that of a man envisioning himself in the final stages of a reality-TV series, a man used to the manufactured suspense that’s designed to keep viewers hooked as they await the winner.

This has been a thoroughly surreal presidential election, but it begins to have a degree of narrative coherence if you view it as a protracted TV series. All along Trump has been participating in America’s Next Top Politician while the rest of us thought we were watching a conventional political race.

Trump repeatedly says that his business experience qualifies him for the Oval Office; it’s actually his decade starring in The Apprentice that has got him this far, and not just because it made him a celebrity. Reality-TV competitions tend to be about dominance: the most attention-seeking contestants brush off their rivals. Trump showed his skill as he bulldozed his way through the primary season, belying conventional wisdom to fend off a crowded field of 16 other Republican candidates.

None could keep up with Trump in the role of maverick outsider, masterfully keeping the cameras on him at all times with outrageous behaviour and deliberately controversial remarks, starving his rivals of attention. Instead of policy proposals we got catchphrases; instead of arguments we got put-downs.

Reality TV as we know it arrived in the summer of 2000, when the island-set Survivor captivated audiences in the US and Big Brother did so everywhere else. These were zero-sum games, with no prizes for fostering a sense of community among the contestants; there could be only one winner, so everybody else was an enemy.

The early winners of reality-TV shows were therefore among the first people to realise that the normal rules of society didn’t apply in these sequestered environments. The first winner of Survivor, Richard Hatch, set the template, gleefully double-crossing supposed allies and conniving his way to the title. He became the United States’ favourite villain that summer, and dozens followed in his wake; the most memorable figures from reality TV are the irredeemable, shameless jerks. The normal people fade into the background.

Survivor was the first big success for Mark Burnett. For his second the English producer adapted its format for the boardroom. But instead of looking for a Hatch-like contestant to take part in The Apprentice when it debuted, in 2004, Burnett effectively cast Trump in the role.

Early episodes now look amateurish, feeling remarkably cheap for a supposedly prestige programme – which could be a metaphor for Trump’s business empire. The show’s fawning over Trump’s wealth, wisdom and leadership is as over the top as the golden interiors of his Trump Tower apartment. We learn little or nothing about Trump’s business acumen beyond the capitalist platitudes that he relies on.

Trump does seem noticeably calmer, his egocentrism less obviously a character flaw, but the speed of the edits and the obvious overdubbing of his speeches make it hard to know how much of Trump’s personality was crafted in postproduction. It is, above all, the most brazen branding exercise ever broadcast, a weekly advert for Trump’s properties and products in the guise of a reality-TV show.

The Apprentice and reality TV in general also conditioned us to conflate success in such dominance rituals with real leadership. The differences, particularly in a democracy, are acute.

The other big reality-TV success of the time, Big Brother, was named after the omniscient authority in George Orwell’s 1984. The allusion is more revealing than the literal conceit of the programme.

Amusing ourselves to death

Amusing Ourselves to DeathBrave New World

Postman warns of television’s trivialising effect on public discourse and the way it conditions people to expect everything, even politics, to be an entertainment. “Tyrants of all varieties have always known about the value of providing the masses with amusements as a means of pacifying discontent. But most of them could not have even hoped for a situation in which the masses would ignore that which does not amuse.”

Amusing Ourselves to Death was published in 1985, but its prescience is only becoming more evident. Hillary Clinton suggested to the New York Times that it explained a lot about the current US election.

Clinton might have had reason to fear such a trivialising effect on the public’s expectations, given that her own political skills don’t necessarily translate well to the reality-TV-style set pieces that Trump excels at. It has often been said that Clinton’s greatest skill is her ability to listen and absorb, but that’s a tough attribute to project at a campaign rally, never mind through a television screen.

In the event she need not have worried. The three presidential debates have exposed the limits of Trump’s reality-TV shtick.

In the first Trump seemed stifled by the format, his face appearing to rebel against the split screen, where he shared half the frame with Clinton, who maintained a studious countenance. Over 90 minutes he couldn’t quite control his gestures, letting out some reflexive grimaces and groans at inopportune moments.

Without the sharp editing of The Apprentice, which left every meandering digression on the cutting-room floor, he struggled to answer questions while remaining coherent.

Without rival contestants to denigrate Trump appeared to have no obvious strategy except to introduce new “rivals” to denigrate.

The second debate took the form of a town hall meeting, with Trump and Clinton freed from the tight split screen to wander the stage. Amid ugly scenes Trump engaged in some reality-TV stuntcasting, inviting three women who have accused Bill Clinton of sexual assault to join him as special guests. It failed to faze his rival. And without a director placing him centre stage, and giving him precise marks to stand on, Trump appeared lost, wandering in the background or looming too close to Clinton during her answers.

By that stage, of course, footage of Trump boasting about groping women had been released, gravely damaging his campaign. There was an unmistakable irony in the fact that while Trump’s rise as a celebrity came through a carefully stage-managed reality-TV show, his downfall came in candid behind-the-scenes footage; the title Access Hollywood never seemed more apt.

Ultimately, Trump appears to have mistaken the electorate for a TV audience, in the process discovering that the manufactured reality of reality TV has only a passing relationship with the real world.

But if reports are to be believed Trump is planning to parlay this brand-building exercise into a further television enterprise, a Trump TV network to monetise his devoted fan base and extend his influence, whether or not he accepts the election result.

In this season of America’s Next Top Politician the real politician holds what appears to be an unassailable lead heading into the final episode. But expect future seasons to offer more compelling characters, unpredictable twists and, perhaps, some unlikely winners. Stay tuned.