Isolation Stories: This is what you call speedy television

TV review: These four mini dramas are a bit hit and miss, but they’ve all been made in lockdown 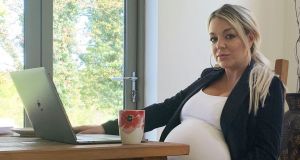 In time there will, no doubt, be a flood of dramas set in these lockdown days. In fact novelists, playwrights and scriptwriters are most likely beavering away as we speak on projects that will reflect on this strangest of periods and the impact it has had on people’s lives.

But the cast and crew behind Isolation Stories (Virgin Media One, Tuesday, 9pm) didn’t treat themselves to any time to reflect at all, the four 15-minute dramas that make up the show all created and filmed since lockdown began, in mid-March. That’s what you call speedy.

Each of the four has been shot in the home of the featured actor. The first focuses on Mel, a woman who, like Sheridan Smith, the actor playing her, is three weeks away from giving birth.

The third of the four mini dramas is the lightest and most fun, featuring a Skype session between a therapist, played by Angela Griffin, and one of her clients, the marginally bonkers Mike, who takes hypochondria to a whole new level

She lives alone, her sense of isolation made all the more intense by the disappearance from her life of the father of the baby, who, once she told him she was pregnant, went back to a wife and child she hadn’t even known he had. He tried to persuade her to have an abortion, but even though that’s what she thought would be best, too, she was damned if she’d be bullied into the decision. “You don’t get to knock me up and then tell me what to do,” she said.

The twist in her story comes when a complete stranger phones her one night, Mel having left an angry message about her situation on the woman’s phone by mistake. It’s an odd scene, Mel overcome by the woman’s kindness after she tells her she was worried about her when she heard the message and wanted to know if she was okay. The call ends abruptly when the good samaritan’s partner enters the room, his abusive screaming suggesting she was living through domestic violence.

Mel tries to call her back, but the number is private, so that’s that. The next day her mood has been lifted by the kindness of this stranger, whom we never hear about again. Once more, she disappears into the shadows.

The third of the four mini dramas is the lightest and most fun, featuring a Skype session between Rochelle, a therapist, played by Angela Griffin, and one of her clients, the marginally bonkers Mike, who takes hypochondria to a whole new level.

When Mike, who is played by Darren Boyd, tells her he’s just had a delivery of hair gel from Harrods in London – he lives miles away, in Bristol – and intends to smother it in Dettol and leave it in the fridge overnight, just to be sure it won’t be contaminated with coronavirus, she erupts, telling him he’s a selfish bugger. Not only did he not consider the safety of the workers involved in transporting his hair gel to his home; he was also demanding a session from her on the anniversary of the loss of her loved one.

“I am such a wanker,” he concedes.

But they end up having a dance together, using TikTok, and agree to another session the next day. You couldn’t get a more lockdownish 15 minutes.

They’re largely lovely vignettes, if a little hit and miss, but more than anything you can’t but marvel at the resourcefulness of the people who have created them in the midst of the pandemic. Four isolation stories told, so many more to come.

John Hume restored to his rightful place in Irish history
8

Spaced-out Barcelona gets its groove on
10