A day in the life of Ireland’s food supply 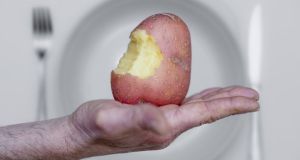 RTÉ’s ‘One Day: How Ireland Eats’ was a real and revealing portrait of a nation

George Orwell once marvelled that so little serious attention is paid to food, despite the fact that its evolution and economics, from farming to packaging, guide the course of the human race.

“A human being is primarily a bag for putting food into,” he wrote. “A man dies and is buried, and all his words and actions are forgotten, but the food he has eaten lives after him in the sound or rotten bones of his children.”

That’s one glorious elaboration on the maxim “You are what you eat”. Another, riveting and entrancing, now arrives in the shape of One Day: How Ireland Eats (RTÉ One, Monday, 9.35pm).

Framed as a day in the life of Ireland’s food supply, it begins before dawn, skipping through choreographed shots of food in motion, and briskly between the insomniac glare of a 24-hour service station, the unnaturally early risers of Dublin’s Victorian Fruit and Vegetable market, then a slumbering Louth potato farm, still shrouded in mist.

The focus is deceptively simple: following from the origin to presentation of the food that sustains you. But the documentary’s technique is curiously godlike; accessing all areas, laden with statistics, it sees all and knows all.

In a similar and satisfying way, the hand that shapes it is invisible. People speak as though unprompted, usually too occupied with urgent tasks to become self-conscious, assisted by a serene voice over from Maeve O’Mahony, benignly supplying context.

“She’s with us all the time,” an employee of a gargantuan supermarket warehouse says of another voice, the Siri-like computer mounted on his arm, politely issuing orders. “You hear her in your sleep.”

Even in this fascinating dystopia, character is served up as efficiently as its portion of the €3m worth of fruit and vegetable we purchase a day.

Just one vivid example is Ciaran Butler, an energetic and trim trader at the Dublin Victorian market, popping fruit in his mouth while dealing with immediate issues (an oversupply of broccoli) and looming ones (the market’s unpromising future).

The show wisely checks back with him throughout the day, for the warm irony of his pronouncement, “We never stop for lunch”, to the singular aptness of his metaphors: “John, I’m in a bit of a pickle.” He should know.

Director and producer Brian Hayes makes subtle, resonant juxtapositions with both his shots – as gorgeously composed as an aerial study of a jittery potato harvester, or the cutaway of spent bullet casings underfoot near an outdoor army kitchen – and his scenes.

So you float from the diesel fumes and industrial spatulas beneath 2,500 army meals (today serving chicken tikka) to a charging bread van (actually a HGV), to a Dún Laoghaire food bank: “The fact that people are still suffering from hunger in Ireland,” comments one volunteer. “It’s a terrible state to be in.”

You may think about that scene again when you meet a chef preparing lobster, steak and caviar for a private jet carrying just six passengers, not because the programme forces any interpretation, but because it is so generous with telling detail.

That’s why the facts, as uncanny to consider as they are – we spend €20 million a day on snacks, serve 3 million portions of chicken, send 8,000 pigs to slaughter while consuming one million rashers, drink 15 million cups of tea – are actually less revealing than the tapestry.

Here is a real and revealing portrait of a nation, shared, like so many things, over food; an artfully composed, surprisingly moving and brilliant document of what you eat and what you are.

God, make way for Gaia: A deity even atheists can believe in
9