House of Cards season 3: Can a president get away with murder?

As the Netflix drama returns will Frank Underwood outsmart his enemies? 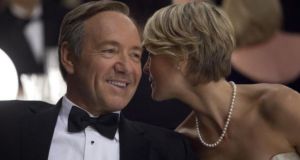 Kevin Spacey as Frank Underwood and Robin Wright as his wife Claire in House of Cards on Netflix. The third season of the drama is available from today.

By the end of series two, Frank Underwood was in the Oval Office, Claire Underwood was fulfilling her first-lady destiny as Hillary Clinton meets Lady Macbeth and Frank’s henchman Doug Stamper was lying in the woods, possibly dead, after taking three blows to the noggin from an ex-prostitute turned unconvincing born-again lesbian Christian. (Incidentally, if you’ve been the victim of an assault by an unconvincing born-again lesbian Christian, there are websites that advertise on daytime TV to help with your compensation claim.)

How did we get to this grim pass whereby FU became the personification of the perversion of democracy, a president even worse than George W Bush – in that nobody has cast a vote for him – and a double killer to boot?

As veep, Frank had fomented the takedown of Garrett Walker, the milksop Potus: first, by inducing Republican senator Hector Mendoza to smear him as mentally unstable (just because Walker and Mrs Walker had had couples’ counselling); and second, by inducing a special prosecutor to demonstrate it was Potus, rather than veep, who was implicated in the casino money-laundering scandal linked to the Chinese businessman Xander Feng.

Witless Walker, you see, hadn’t redacted his log, while Frank, sensibly, had excised the compromising bits from his. “He’s in the darkness now and I’m the only beacon of light,” quoth Frank with typically gaudy, Machiavellian glee. “Now to gently guide him towards the rocks.” Which he did, like a splash of Bourbon, before turning his attentions to the next battle – making himself electable in 2016.

And Claire? Do you think she’ll be content merely with duties as first lady and those gloves that look suitable for falconry but not much else? Or will she be seeking to diversify her resumé in order to achieve political office while her husband is in his post-presidential dotage? My money’s on diversification. At the end of series two, she ditched her bill to make it easier for victims of sex crimes in the military to speak out, doubtless because it wouldn’t further her career, leaving the private she had used as PR on lithium and feeling generally betrayed by her putative champion. So much for Claire the feminist warrior. She’s a power-seeking missile without compunction.

And that body in the woods? Is Doug Stamper, Frank’s ex-chief of staff, dead? Certainly, Rachel Posner intended to kill him. Doug had been tasked with ensuring her silence over Frank’s murder of his former lover, blabbermouth hack Zoe Barnes, because Posner knew too much about Zoe’s death. But Doug fell in love with Rachel, Rachel fell in love with a woman from church and Doug, angry at her for falling for someone who wasn’t him, chased her through the woods, where she, quite possibly, offed him in self-defence. If he’s dead, though, who will silence Rachel and thus stop Potus being fingered, as he should be, for murder? Actually, even if Doug is alive, someone will have to keep Rachel shtum. A tricky task.

The key to keeping the murder a secret may well be Thom Yorke-lookalike FBI informant and hacker Gavin Orsay, the dude who strokes his pet guinea pig, Cashew, rather like Dr Evil strokes his cat. He has all the dope on the Zoe Barnes conspiracy, but is obliged to keep shtum about it as part of a deal with Doug to drop the hacking charges against him. By “him” I mean Orsay, not his guinea pig, who may be female.

Let’s not forget about Remy Danton, Frank’s former press attache turned lobbyist with whom Underwood had a falling out. The last time we saw them together, though, they were completing each other’s Churchill quotations – the very emblem of Machiavellian rapprochement. “To improve is to change,” said Frank. “To perfect is to change often,” retorted Remy. So, it’s quite possible that the former protege will be working for FU again in series three, as Frank adheres to the principle of keeping his friends close and his reptilian turncoat backstabbers even closer. Again, tough gig to pull off.

Whichever way you figure it, Frank, despite being the world’s most powerful man, is in all kinds of trouble at the outset of series three. He has more skeletons in his presidential closet than his wife has Louboutins in her (doubtless extensive) shoe collection. And more enemies, too: they include wronged ex-White House chief of staff Linda Vasquez, wronged ex-president Walker and his wife Trisha, the Republicans in Congress and most Democrats in Congress. All have very good reasons to want to topple FU.

But the most forbidding foe he will confront is surely Raymond Tusk, the wounded elephant of a businessman who Frank tried to throw under the bus over the money-laundering conspiracy. At the end of series two, Raymond and Frank traded baleful bon mots after a night at the opera. ”When they put you in that box, barely bigger than a coffin, remember how beautiful the music was tonight,” snarled Tusk. “Puccini’s such a downer. I prefer something more optimistic,” retorted Underwood. And then Underwood walked off, humming Hail to the Chief. Nobody was tempted to join in.