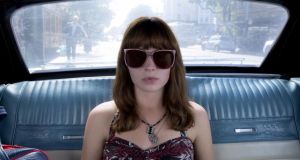 Girlboss: Sophia is grabby and obnoxious, even ignoring RuPaul in her quest to become a mindless mogul

Being branded a millennial these days is nothing short of slander. Who would want to be associated with those self-obsessed, Snapchatting simpletons, who can barely be bothered to lift a middle finger to flip the bird at any passing oldies? Telly millennials are often at the root of this demonisation. Where once there were only the kids from Fame or the snot-encrusted Grange Hill pupils for adults to be miffed at, now TV is filled with a myriad of zygotes demanding attention.

Lena Dunham’s Girls, which has just finished its final season, radically altered the perception of young women on TV. “Here be girls!” it screamed, warts, other STDs, UTIs and all. They were every inch as maddening as their male counterparts, complex, often unlikable and utterly engaging. Yes, they were a particular type of girl – white and privileged – but, even if it was an imperfect portrait, Girls was an endearing look at a unique time of navel gazing and shorterall-wearing salad days.

It was crushingly disappointing that, for all its challenging, contemporary themes, 'Girls’ ended on a conventional note

Which is why it was crushingly disappointing that, for all its challenging, contemporary themes, Girls ended on a conventional note, with Hannah coping with her role as a mother. Gone were her artistic challenges, replaced in the final episode by the struggles of motherhood. For six years Dunham’s character was shown grappling with the writing world and her desire to be a voice of her generation. Fulfilled by work, she relied on her talent after numerous personal failures. Dunham and Judd Apatow, her executive producer, curiously chose to end a show that once celebrated the limitless freedoms of a vibrant modern girl with the full stop of a baby’s cry.

Girls ended with youth being wasted on the young, but adulthood is “where dreams go to die”, according to Girlboss, a brash Netflix sitcom written by Pitch Perfect’s Kay Cannon. It’s a fictionalised account of the rise of Sophia Amoruso, the Nasty Gal Vintage founder, who made San Francisco her bitch by selling second-hand clothes – which is just as awful as it sounds. Beneath the stinging narcissism of Girls you could always find some mild empathy for the characters; it offered the opportunity to cringe, recognising the brat within yourself. The Sophia of Girlboss provides none of these moments of illumination, because she is, to quote social-media parlance, THE WORST.

With its emphasis on success at any cost, Girlboss has created a disgusting hybrid: the manic pixie capitalist. She is Patrick Bateman in platform boots, Ivanka Trump in Zooey Deschanel clothing. Sophia Marlowe is tortuously annoying,with her plot-device neurosis and her nonsensical tantrums. She’s not scrappy and determined, she’s grabby and obnoxious, routinely ignoring friends, family, health and even RuPaul to achieve her goal of being a mindless mogul. When she’s not forcing her box-headed boyfriend to have sex on a mattress full of money she’s calling her would-be customers idiots.

Fashion is supposed to be her passion, but by the end of the first episode she callously dupes a local vintage-clothes seller and sells the jacket that was her enlightening talisman. Sophia acts as if the world should bow down before her for shilling skirts on eBay with such breathtaking entitlement that it would make even a Jenner girl blush.

Reality telly has always been the bastion of youth, but even its tide is turning. There was a time in its history when people were only sent off to an island in the hope of creating Big Brother by the sea. These were the days of shows like the hangover life raft Shipwrecked and the original Celebrity Love Island. The experiment was to cram a sandy nook in the South Pacific full of impossibly tanned and toothy young people, ply them with booze, and try to repopulate telly with a race of blank-faced superbabies. Failing that, the shows should at least be something akin to Lord of the Flies but with the empty sexiness of Hollyoaks, where the sun-bleached wannabes tipped Moët from the conch while devouring each other on the shore like dying jellyfish.

Now viewers apparently want more from these shows, not just Rob from Dagenham learning to use a palm frond as makeshift loo roll. As with all “lifestyle” shows – aka posh people’s reality telly – there has to be a skill to accomplish or a tedious emotional “journey” to complete, which is why we’re in an era when the jumped-up scout leader Bear Grylls creates shows where supposed un-fame-hungry individuals gleefully take part in their own punishment to “challenge” themselves.

It’s season four of his self-flagellation survival show, The Island with Bear Grylls (Channel 4, Monday, 9pm), and Grylls’s zeitgeisty new twist is to pitch a group of millennials against a group of babyboomers in a bitter battle to see if age or youth will brave the elements best. It’s a fight to the death or until someone is sent off in a speedboat gurgling with severe dehydration.

The young folk (Club 18-30) did not get off to a great start, squabbling about which direction to take to find their base as if they were surfacing from the rave in the woods and trying to get back to their tents at Electric Picnic. They were marshalled by Ben Cooper, a sentient football jersey, the type of ruddy-faced irritant who believes Kasabian are “real” music and thinks bellowing “Oi oi!” into a woman’s face is a form of mating cry.

Annoyingly, after a series of strops directed at the youngest camp member, Frankie, and with their amber wee signalling a scary amount of time without fresh water, Ben managed to create the necessary fire. His unwarranted confidence now has an extra godlike sheen. A coup must take place, but it might not come from inside the camera-hogging kids’ camp.

The most senior contestant, 66-year-old Frank, describes himself as an enthusiastic industrialist (which also could have been said about the serial killer from the Saw franchise). He spends most of the first episode throwing himself around like a sexagenarian Ross Kemp, a whirlwind of reality-show mastery.

Immediately running off to find a place to set up camp before the others have even finished introducing themselves, Frank then conjures up a fire. He builds beds from branches, supervises the cooking of a limpet broth, and rounds off the evening by demonically howling Dion’s The Wanderer into the darkness in his shorts like something from a tropical Twin Peaks.

It’s highly likely that Frank will go full Col Kurtz before the end of the series. Don’t be surprised if he ends up hollowing out his younger campmates to use as canoes.