Game of Thrones: the problem with the dead

The fantasy series built its reputation on bloody murder. But is its body count – and its blase attitude to death – starting to sap the series? 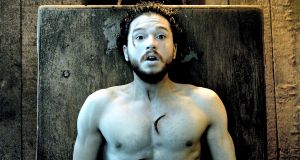 This just in: Jon Snow on his slab

The last series of Game of Thrones (Monday, Sky Atlantic) ended with the shocking sight of (spoiler alert) Jon Snow lying dead in the snow. Oh dear, how will he ever (spoiler alert) grow up to become the Channel 4 newsreader we know and love if he’s got loads of holes in him?

Last week’s episode ended with the shocking revelation that old people are sometimes naked too. It turned out that Melisandre aka Witchypoo is actually a very old person wearing the glamour of youth. This is, of course, a well-worn fantasy trope. Only in Game of Thrones would they throw in the extra bonus of gratuitous nudity.

Anyway, the murderous politics of Game of Thrones are now pretty complicated and it’s only a matter of time before the animated geography-spanning credit sequence and “previously” clips are longer than the actual show.

This episode begins with Bran, who was absent throughout the last season. He turns up as a nearly grown man hallucinating under a tree with some hippies. It’s how a lot of people spend their teens, to be fair. Bran hallucinates his own father’s past (back when his father had a head) and sees that his linguistically-limited, piggy-back dispenser, Hodor, was once a talkative youngster called “Willis”. No way. “Whatchoo talkin’ about Willis?” I shout at the screen (as do, I discover later, half of the people on the internet).

Then Bran’s friend Meera, standing in for the viewer, sulkily laments that nothing much else is happening with this subplot. Another character promises that awesome stuff will happen in future episodes, honest, and that’s that (there’s quite a bit of place-holding so far this season).

Elsewhere Ramsay Bolton is having a bad day because Theon and Sansa, whom he enjoyed brutalising, have run away with the help of Brienne (the lady knight) and Pod (not the former Dublin club). Now there’s a chance he won’t get to rule the north. He is not happy. He is a typical only child, really. He has a tantrum on discovering his father, Roose Bolton, is having a new baby. Sadly Roose has been reading books of military tactics instead of parenting manuals and so is blindsided when Ramsay violently stabs him to death. “How could I have foreseen that my amoral, psychopathic son who enjoys torturing people, might someday turn on me?” screams Roose (or something to that effect). Then Ramsay has some vicious dogs eat his stepmother and infant brother.

Ramsay is the new Joffrey, a character so evil that an incestuous, child-murdering rapist like Jaime Lannister seems positively Han-Soloesque by comparison. Of course, our views on Ramsay may change. Game of Thrones specialises in unexpectedly allying nefarious baddies with beloved characters. Previous hate figures such as traitorous Theon, the brutish Hound and the aforementioned Jaime can, a few atrocities later, become sidekicks for characters we love, such as Sansa, Arya and Brienne. Before long Ramsay will be best chums with Hodor and we’ll realise that, a few infanticides notwithstanding, he’s quite nice.

Ramsay is not the only person in the north murdering for fun and profit. Though if I was a Westerian interested in profit, I’d forgo killing and become a family therapist. On the Iron islands, Balon Greyjoy finds himself being flung from the flimsy rope bridge that leads to his castle by his own brother. “I should have known that walking across this bridge in a storm was a health and safety risk from the very start,” screams a plummeting Balon (or something to that effect).

His family seem pretty stoical about it. Bloody murder is just how new chieftains are created in Westeros. I’m pretty blasé about it too. It might seem more brutal to me if I didn’t live in a proportionally representative multi-seat system. Although, it’s also possible that unexpected random death just isn’t doing it for me any more. In the early seasons of Game of Thrones the continuous instability had a dark, exciting energy to it. After a while, constant tumultuous change and death gets monotonous and (whisper it) boring.

Bromantic frenemies Varys and Tyrion know what I’m talking about. Over in the city state of Meereen they’re trying to keep order in the absence of Daenerys Targaryen, the First of Her Name, Queen of Meereen, Queen of the Andals and the Rhoynar and the First Men, Lord of the Seven Kingdoms, Protector of the Realm, Khaleesi of the Great Grass Sea, called Daenerys Stormborn, the Unburnt, Mother of Dragons (and you thought double-barrelled surnames were pretentious), who is off being held prisoner by a Dothraki horde (basically the band System of a Down on horseback).

They’re learning that regime change is more difficult than it appears. Their war fleet has been destroyed by an elusive insurgency and many of the people are hungry and/or annoyed. Tyrion decides on a policy change – not “create a sanitation system” or “form a rudimentary social welfare net”, but “unchain the dragons”. He goes down to the dungeon to do just this, only to find, to his surprise, that they don’t eat him. This means, I think, that at some point in the future we’re going to see Tyrion riding a dragon.

That will be amazing. But it probably won’t happen until season 12.

Anyway, we’re running low on heroes. So Davos Seaworthy (Davos is a sailor with a very literal name – it was this or Dennis Boatgood), who is now in league with a bunch of “Wildlings” from over the wall (angry hippies), visits secret nude old person Melisandre. “Melisandre, could you have a go at conveniently resurrecting Jon Snow from the dead? He’s fierce hunky and I’ve never heard of resurrecting people from the dead backfiring in any way,” says Davos (or something to that effect).

So Melisandre goes and utters foreign incantations over Jon’s near-naked corpse (learning a language is a good way to get a job in a multinational call centre or as a necromantic witch).

It appears not to work. Melisandre and Davos look sad and leave the room. But then . . . drumroll/spoiler alert . . . Jon Snow leaps up with a start and begins to read the news.