Thousands of people from towns and cities responded to a government request to help farmers with the harvest after an especially wet summer and wartime shortages threatened a hungry winter. One gentleman of the press described his day on a farm 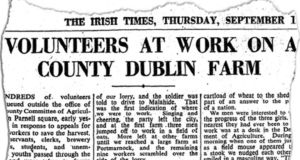 It was my intention to force to the head of the queue and get off to a farm with one of the first parties. “Excuse me,” I kept saying, as I shouldered past the volunteers. “Excuse yourself,” said a young girl, “I’m as anxious as you to get to work.”

It was more difficult to get past that queue than any I have ever encountered. After twenty minutes I gave up trying, and joined the end of the column of civil servants from the Department of Agriculture. We were escorted through the office and out to a lane at the back [of the County Committee of Agriculture on Parnell Square] and seated, in twenties, in an open Army lorry.

The party I was assigned to consisted mostly of civil servants, who were prepared for a muddy day. Three girls in the lorry had a shopping bag, in which they carried overshoes, old gloves and slacks. The men wore patched suits, heavy boots and battered raincoats.

The harvest field was no place for high heels, nail varnish or lounge suits. I felt out of place in a double-breasted suit, trilby and raincoat – and later regretted my attire.

A man was told off to take charge of our lorry, and the soldier was told to drive to Malahide. That was the first indication of where we were to work. Singing and cheering, the party left the city, and at the first farm three men jumped off to work in a field of oats. More left at other farms until we reached a large farm at Portmarnock, and the remaining nine workers scrambled over the side of the lorry.

We sat in the hay in the farmyard until the farmer came and showed us what he wanted done. A nine-acre field of wheat had been reaped and stooked on Monday. It was wet in places, and our job was to tumble the stooks and turn the butts of the sheaves into the wind to dry. It was warm work, at first, but we soon became clever enough to pass down the row of stooks, searching for the wet parts where the sheaves were tied and loosening the butts.

Before we realised it, the farmer told us it was one o’clock and time for lunch!

In the diningroom of the beautiful farmhouse we ate sandwiches and drank tea, satisfying appetites sharpened by open air, a wind from the sea and enjoyable work.

The result of the morning’s work was apparent after lunch, when the farm workers brought out the carts and started to take the dried sheaves to the sheds. Some of the men in our amateur party had knowledge of farm work, and one drove a horse and cart from the field to the sheds all afternoon. Others helped to stack the sheaves in the shed, and three of us tried to manipulate pitchforks.

The sun came out, warm and welcome. The sky became blue, and work was an enjoyable pursuit. We were saving the harvest, and every cartload of wheat to the shed was part of an answer to the prayers of a nation.

We men were interested to watch the progress of the three girls. The nearest they had ever been to farm work was at a desk in the Department of Agriculture. During the morning when one of them jumped as a field mouse appeared under a stook we nudged each other and smiled in a masculine way. “They’re women,” we said, “what else can you expect?” And so, when they disappeared after lunch, we were not surprised. We mentioned it casually to the farmer. “They are up in the high field,” he told us.

I went to the high field which overlooked the sea in the afternoon to see for myself how office girls reacted to open-air work. Three men were cutting wheat and the sheaves shot out from a binder. The girls were following the binder and building stooks. Admittedly, it was not in the fast and expert fashion of experienced farm labourers, but it was effective. They wore their gloves and struggled with sheaves until a stook was built. Then they stood back and admired their work as a woman looks at a vase of flowers on a table.

A Very British History: ‘I heard chants supporting the IRA. My blood boiled’
10

Independence and the shadow of home rule: the legacy of the Irish Parliamentary Party
Real news has value SUBSCRIBE