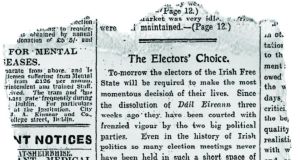 To-morrow the electors of the Irish Free State will be required to make the most momentous decision of their lives. Since the dissolution of Dáil Éireann three weeks ago they have been courted with frenzied vigour by the two big political parties.

Even in the history of Irish politics, so many election meetings have never been held in such a short space of time, and there certainly never has been such eager bidding for the support of the electorate.

When the election campaign opened there was only one real issue before the people. That issue remains. It has been hidden by the obtrusion of all sorts of more or less irrelevant points, which have been magnified out of all proportion to their national importance. Attempts have been made to secure the sympathy of the farmers by competing offers in respect of the land annuities.

Spokesmen of Fianna Fáil have angled for the town-workers’ votes by promises of new industries, here, there, and elsewhere; and great play has been made with the statement that since the advent of Mr. de Valera’s Government, large numbers of new factories have been established in the twenty-six counties. All these, and many other, arguments are beside the point.

Ultimately there is only one thing that matters in this election. Do the people of the Free State wish to remain within the British Commonwealth; or do they wish to become citizens of a twenty-six county Republic? Mr. de Valera and his supporters carefully have ignored this issue; but, if they should be returned to power to-morrow, it will assume urgent and menacing importance.

Intelligent electors will banish all minor considerations from their minds. Their choice, after all, is very simple. Two groups are soliciting their votes. On the one hand, the constitutional candidates, with Mr. W.T. Cosgrave at their head, declare that they will maintain Dominion status, thus securing for the people of the Free State all the many advantages that citizenship of the British Commonwealth confers upon them. In the Commonwealth, the Irish Dominion has privileges and opportunities that it never could hope to enjoy as an independent republic. It has all the world-wide services of the British race at its disposal, and is not required to pay a single penny for their use.

Furthermore, Mr. Cosgrave promises that he will bring the economic war with Great Britain to an immediate end. After the experiences of the last six months that prospect alone ought to ensure his success.

On the other hand, Mr. de Valera and his Labour allies offer nothing but national bankruptcy. Apparently they contemplate quite cheerfully the indefinite continuance of the economic war; for none of them has mentioned its conclusion. They will persist in their ruinous policy of prohibitive tariffs and fantastic bounties; they will give the coup de grâce to the expiring cattle trade, and they will impoverish the middle classes in an effort to placate the clamant elements among their supporters.

Their ultimate policy, however, is to break the last link with the British Commonwealth. Mr. de Valera will abolish the Senate, snap his fingers in Great Britain’s face, and lead a broken nation forward to hungry independence.

Mr. Cosgrave has ten years of solid achievement to his credit; Mr. de Valera has ten months of ruinous muddling. In any country with a normal political development, there could be no doubt concerning the result of a general election which offered such a choice; but the Irish Free State has had abnormal experiences, and its voters have not yet learned to dissociate political principle from personal prejudices. Consequently, there is no certainty about to-morrow’s poll.

In order that Mr. de Valera and his friends shall be defeated, it is essential that every citizen shall vote to-morrow. The matter is too grave for indifference; for to-morrow’s vote will decide the fate of every man, woman and child for the next five years, if not for the next century. We appeal to those of our readers who hitherto have refrained from voting to cast aside all prejudice and fulfil their duty not only to the State, but to themselves.